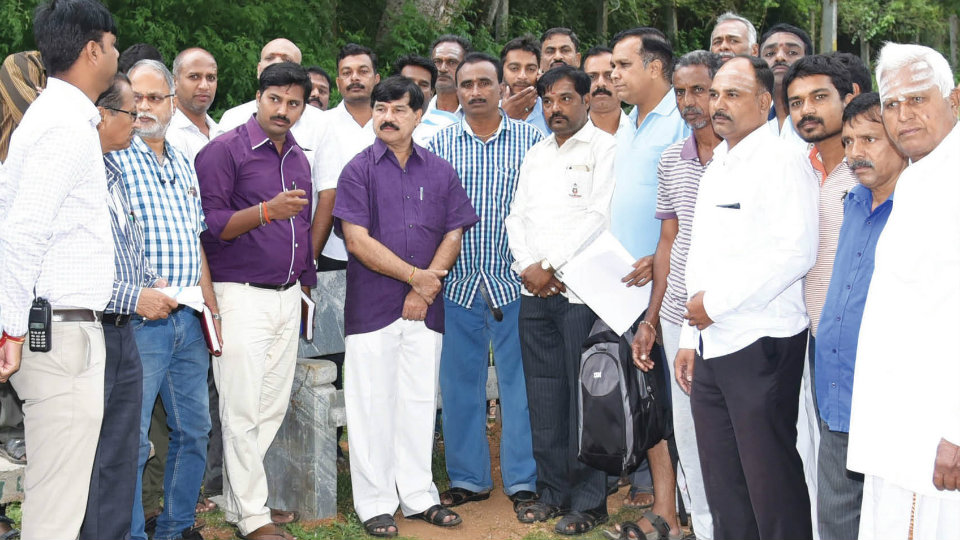 Mysuru:  Continuing his inspection of areas coming under his Assembly constituency, KR MLA S.A. Ramdas conducted a padayatra in MCC Ward No. 54 on Saturday.

Commencing his padayatra from the foot of Chamundi Hill, Ramdas, following complaints of illegal sheds springing up in the area, directed the officials to evacuate the sheds and provide proper parking space for vehicles and construction of toilets in the area.

He later visited Gowrishankarnagar, where residents complained of an illegal layout coming up on Muzari Department land, when the MLA assured the residents that officials will visit the site and take appropriate action. Ramdas also assured that measures will be taken to address civic issues such as drinking water, power supply, street lights, underground  drainage etc.,

When some residents complained of thefts, burglaries and gundaism in Gundu Rao Nagar and Muneshwaranagar, Ramdas directed the Police to take necessary action to prevent crimes.

Amidst his padayatra, Ramdas participated in an Women Empowerment Meet at Mata Basavanjali Mutt in Muneshwaranagar and held an interaction with the gathering.

Ramdas later visited Nalanda School, where he planted saplings and interacted with  the students.

Ramdas later attended a Suvidha Programme of the Central Government, where he, along with MP Pratap Simha, distributed free sanitary napkins to Women Self-Help Groups.