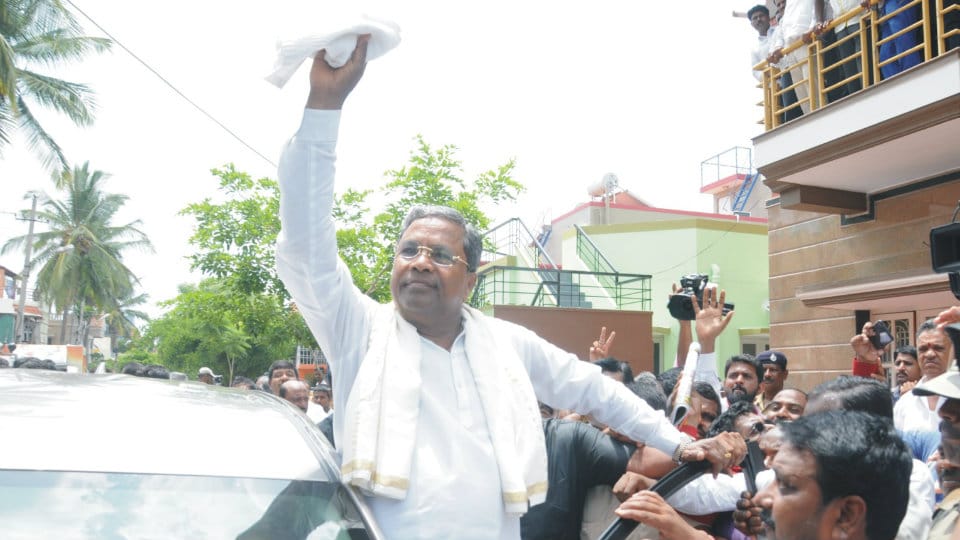 Mysuru:  Chief Minister Siddharamaiah was in high spirits this morning, as he came out of his residence in T.K. Layout after holding a meeting with the party workers and supporters. The reason was they had expressed confidence of the Congress party’s victories in both Chamundeshwari and Varuna Constituencies.

This Joie de vivre he carried while he addressed the media later, even as hundreds of his supporters from both the Constituencies had gathered outside his house since early morning.

Targeting Prime Minister Narendra Modi directly, Siddharamaiah said that it was unbecoming of the country’s PM to be talking about 2+1, 3+1 and reducing the level of political campaigning to that of a street brawl.

Quoting Purandara Dasa, the 16th century saint’s composition, “Neecha buddhiya bido Nalige,” he said there were real issues which the Prime Minister must concentrate than indulging in personal attacks. No Prime Minister before him including the likes of Indira Gandhi or Rajiv Gandhi had spoken like him, he added.

Asked if there was a 3 per cent swing after Modi’s speeches in the last leg of the elections towards BJP, he said that it was more of a hype and he was sure that his party would come back to power with a clear majority.

“We are clear, we will win Pucca. I have no tensions. All the Congress workers are happy. When the Captain or Senapathy is happy, then the soldiers also will be happy. Having been in politics for so long, I can understand the pulse of the people,” he said.

On being asked about Hublot watch, Siddharamaiah shot back, “What about Modi’s dresses. Did I lie that I did not wear the Hublot watch. It was given to me by Dr. Varma, a doctor from Dubai who had produced the purchase bill. He also filed an affidavit in this regard with the Anti Corruption Bureau (ACB). Unlike Modi, I have not lied.”

Asked about B.S. Yeddyurappa’s claims of 150 plus seats, he said that during the by-election in Gundlupet, the former Chief Minister had said that the by-election  results would point to the Assembly elections and the victory will be a clear indicator of BJP’s target of Mission 150. But they lost the elections and there is no way they will be able to achieve the target, he ridiculed and said that it was unthinkable that Yeddyurappa could think of tying the hand and legs of voters and asking them to vote.

Commenting on the clash of workers of Congress and JD(S) at Chamundeshwari, he said that it was only those who were losing confidence of victory indulging in such tactics.

After addressing the media, Siddharamaiah drove to Chamarajanagar for campaigning and he will then go to Mandya District and Pandavapura.

Varuna Constituency candidate Dr. Yathindra was also present. Since this is the marriage season, many women workers who are performing the marriage of their children had come to the CM’s residence to give the invitation cards.

2 COMMENTS ON THIS POST To “CM confident of victories in Chamundeshwari, Varuna”