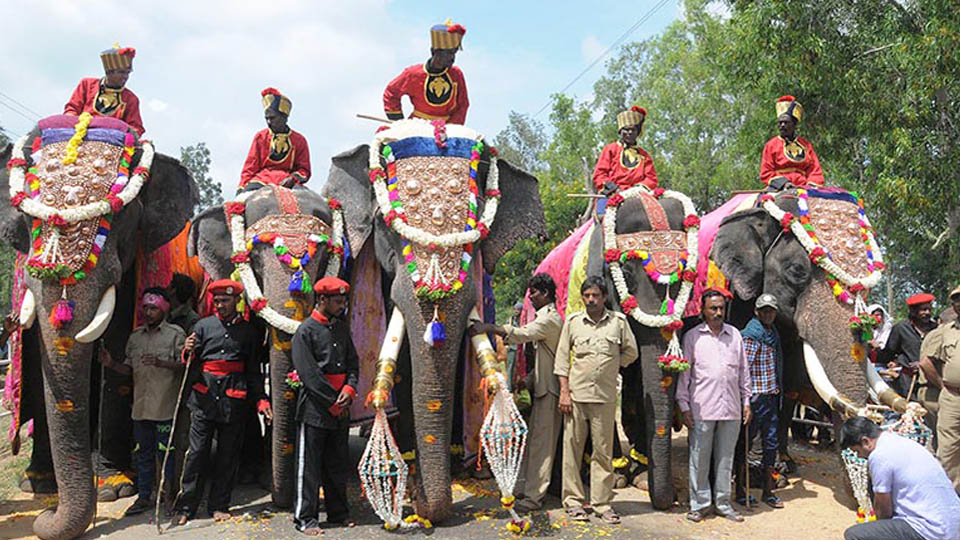 Mysuru: Gajapayana, the traditional march of elephants from jungle camps to Mysore Palace for the annual Dasara festival, will be held on Aug. 12 at Nagapura camp near Hunsur. Earlier, the district administration had planned Gajapayana on Aug. 14.

District Minister Dr. H.C. Mahadevappa will flag off the march. The first batch of eight Dasara elephants will reach Aranya Bhavan. On Aug. 17, they will be welcomed to Palace at 11 am.

Till now, Gajapayana was a ceremony that was handled by officials and some elected representatives. This year, Tourism Department, schools and colleges and women’s organisations will be involved in making Gajapayana a grand success, said Deputy Conservator of Forests (Wildlife), Mysore  Circle V. Yedukondalu.

The first batch will have Howdah Elephant Arjuna, Balarama, Abhimanyu, Gajendra, Vijaya and Cauvery. Apart from these, Varalakshmi and Bheema will also be brought. The second batch of remaining seven elephants will arrive before Aug. 20.

The tribals of Nagapura will stage a demonstration to register their protest against the alleged failure of the State government to fully rehabilitate them following their relocation from Nagarahole Tiger Reserve almost 18 years ago. The demonstration will be staged on Aug. 12 at Veeranahosahalli on the day of Gajapayana.

According to tribal leaders, not all tribals have been allotted five acres under the rehabilitation package though 731 hectares was released for the purpose. The tribals will also protest lack of facilities, including government failure to transfer Ashram schools run by the Department of Social Welfare to the Education Department.