Mysuru: While it is common in western countries for people to drive their vehicles under the influence of ganja (cannabis) and cause public nuisance, a similar incident was reported in Mysuru yesterday where a youth, speeding in a car, damaged several vehicles as the Police chased him.

After smoking the weed, the youth, hailing from Kerala, drove his car yesterday evening and hit several vehicles and terrorised many pedestrians. He was later chased by a Police vehicle and was forced to stop his vehicle near the Suburban Bus Stand. Such was the state of the youth that he could not even utter his name to the Police when he was being questioned.

According to the Police and passersby, the youth, identified as Shamshuddin from Kasaragod in Kerala, drove his Maruti Swift car (KL-14-M-2200) to Mysuru via Hunsur and as he reached the Hinkal junction, he jumped the signal and haphazardly drove towards the city.

Observing the manner in which the youth was driving his car, traffic Policemen at the Hinkal junction chased the car to prevent it from colliding with other vehicles. The youth, after crossing the Hinkal signal, speeded towards Vijayanagar first Stage, passed  Paduvarahalli and drove towards Kalamandira, hitting several vehicles along the route.

The youth jumped the Metropole signal and entered the D. Devaraja Urs Road through JLB Road entrance though it is a one-way. Seeing the car entering the one-way road, several shocked motorists made way and pedestrians ran towards the footpath and shops. 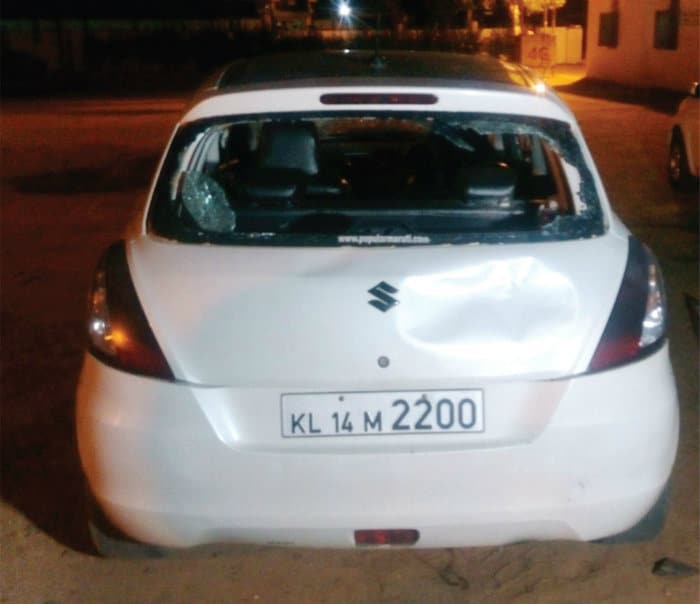 Realising that the youth had to be flagged down, the Police passed messages to all traffic limits and teams were set up to stop the speeding car. Seeing the vehicle heading towards Suburban Bus Stand, the Police blocked his way by making a few autorickshaws to park in the middle of the road near the Arch Gate of the bus stand.

Not stopping at the Arch Gate even after seeing the autos parked across the road, the youth collided against a bike that was parked next to an autorickshaw. He had to stop his car there, he had reached a dead end.

Seizing the opportunity, a few auto drivers and the public pulled the youth out of the car and beat him black and blue. Enraged public also damaged the glasses of his car. He was later handed over to the Police who took him to the K.R. Hospital for medical test where he could not even tell his name.

The Police had to wait till the youth regained his senses to reveal his identity. A case has now been booked and a probe is on.