Home » Columns » Abracadabra By K. B. Ganapathy » Musings on Arnab Goswami: Dragon of the English TV 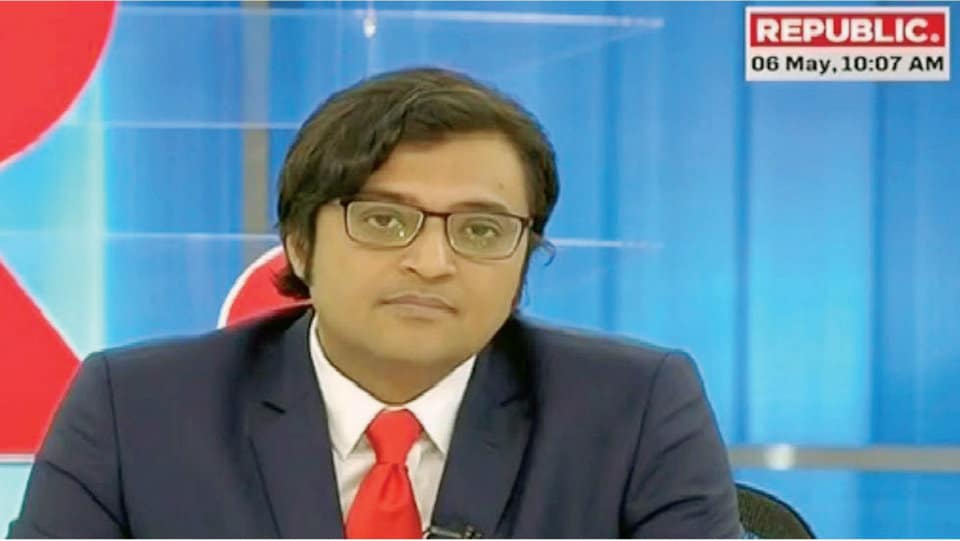 Musings on Arnab Goswami: Dragon of the English TV

Who is afraid of Arnab Goswami? Not Times Now. Not Shashi Tharoor nor anti-nationals. Then who? Nobody. There is no need either. Watch, he will soon be tamed by his new TV channel Republic TV launched on 6th May 2017.

Arnab has been the voice of Times Now TV news channel for over 10 years since 2006. It was a channel full of sound and fury signifying some news or happening which the viewers soon decided to scroll to another channel more sober. Under Arnab Goswami, Times Now was a virtual Tower of Babel. It was just cacophony. He might thunder “the nation wants to know,” but the viewer would not know what was it that the nation wanted to know because he himself would go meandering with a verbal diarrhoea. The viewers got tired and confused.

His programme produced more heat than light on the subject of discussion. It was confrontational rather than convivial so much so the learned panellists became mute rather than vocal. Well, he even became argumentative to the point it was like watching a one-man show. He was seen and heard imposing his views and opinions not only on the panellists but also on the viewers. “I am right, you are wrong.” An anchor cannot be judgemental — nay, the Police, prosecutor and the Judge!

Small wonder, Arnab Goswami, having worked with NDTV and Times Now, has not understood what it is to work for a boss. After all, he who pays shall call the tune. In Times Now he seemed to have overstepped his role to get sacked overnight, so to say. To assert and live by the credo that “I don’t work for anybody but my audience” seems audacious and suicidal in a profession where there is a boss (in his case Bennett Coleman & Co. Ltd. headed by two youngsters) always looking over Arnab’s shoulder like a Big Brother.

Having suffered at the hands of a Big Brother, one thought Arnab Goswami would be wiser by being his own boss, like yours truly. Please, pardon my immodesty, if it is. According to reports, BJP Rajya Sabha MP Rajeev Chandrasekhar, an industrialist, is a major shareholder along with Mohandas Pai in Republic TV. Well then, now also Arnab has a new boss, a Big Brother, looking over his shoulder, as he screams “the nation wants to know,” in Rajeev Chandrasekhar and Mohandas Pai.

Now, what happens if there is a conflict of interest between  Rajeev Chandrasekhar the BJP politician and himself? A million word question!

Be that as it may, I, as an Indian and Hindu, feel assured that there are two English channels now — Times Now and Republic TV — which are pro-country and pro-army, no matter I may feel a bit irritated and annoyed watching these two channels due to my enfeebled physical condition.

We have seen, in our democracy with a liberal Constitution, there are individuals and political parties with ideologies that go counter to nationalism and are anarchistic. They speak in a language that does not augur well for our country. They would destabilise the Constitutional institutions and in turn the country’s secular character and integrity. That the news media, both electronic and print, are seen being influenced by these ideologues and anarchists, at least some of them, for whatever reason. Some reasons were exposed when the Radia Tapes scam made news.

If this trend continues with our political parties, political leaders and the media, there is a danger of the people of the country getting polarised on the basis of religion, specially the people belonging to the Hindu majority. The other people belonging to the minority are, anyway, already united in favour of those who are opposed to Hindutva. While this kind of polarisation behoves well for the BJP, it may in the future lead to our country becoming less secular and more theocratic. Anarchists and pseudo-secularists may in a way help the RSS in achieving its political goal — Hindu Rashtra as a counter-weight to Pakistan’s Muslim State. Let it be.

Arnab Goswami’s bravado is admirable. He may say that “he has lost the sense of fear.” Fine. But to live in this world of changing ideologies and politics, wisdom lies in being pragmatic rather than idealistic. Discretion is the better part of valour even when one wants to practice value-based journalism like Arnab Goswami of Republic TV. Best of luck.

Tailpiece: On Friday, 12th May 2017 around lunch time Brijesh Kalappa, the Congress spokesperson, gets a call from the Republic TV. Brijesh takes the call on being misrepresented by the caller. However, Brijesh had told the lady that he would not like to talk because your channel is owned by BJP. Later, Arnab comes on the line and for six minutes foul-mouthed Brijesh in an appalling on-air conversation when Brijesh hung up. Arnab, however, carried on his diatribe to a dead phoneline for another three minutes thereafter!

This incident had gone viral on the social media. That’s how I came to know of it. Now we know why Arnab behaved the way he did. That BJP thing must be the provocation. However, Arnab’s reaction seems to be lacking in restraint expected of a seasoned journalist. Is he Republic TV’s angry young man like Hindi cinema’s Amitabh Bachchan? The latter we enjoy, but certainly not the former!

4 COMMENTS ON THIS POST To “Musings on Arnab Goswami: Dragon of the English TV”