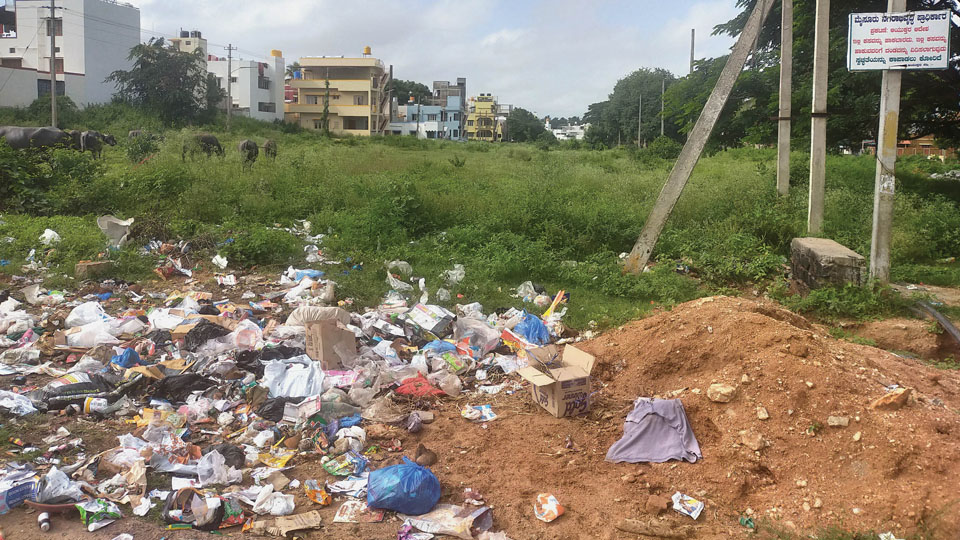 Will the public be more responsible?

Mysore/Mysuru: Garbage dumping is continuing on the roadside at  ‘E’ Block in Vijayanagar 3rd Stage despite a warning board put up by Mysuru Urban Development Authority (MUDA) asking the public to refrain from doing so failing which they (public) would be penalised.

An aggrieved resident of ‘E’ Block, next to Lakshmi Supermarket, who has sent the photos to SOM, has stated that earlier people used to dump their household garbage near the tree on the roadside, which is still being continued. Though the area has developed now and many houses constructed, people have not stopped dumping garbage which is causing a lot of inconvenience to the residents residing in the surroundings, who are forced to inhale the stench emanating from it.

The resident has further stated that when a complaint is lodged to the Mysuru City Corporation (MCC), the MCC staff promptly comes and clears the garbage and after they leave, garbage is again being dumped at the same spot. Many residents were not utilising the services of the MCC staff when they go from door-to-door to collect garbage and then dump the household waste at the same place, the resident alleged and added that even after requesting personally, the people still dump the garbage.

It is time that the public be more responsible and help keep the locality clean, which also prevents the outbreak of diseases.