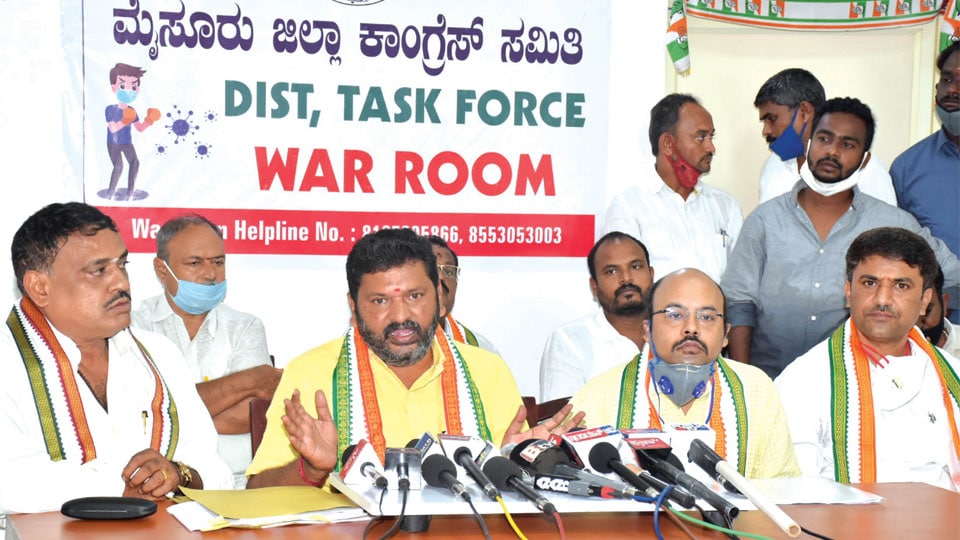 Mysore/Mysuru: Stating that the COVID-19 pandemic is likely to spike further in August, Congress MLA from Varuna Dr. Yathindra Siddharamaiah has urged the Government to re-introduce Institutional Quarantine and to set up COVID Care Centres (CCCs) at all Taluk and Hobli levels in the district.

Addressing a press meet at Congress Bhavan near the City Railway Station here yesterday, Dr.Yathindra accused the State and Central Governments of failing to contain the spread of the virus in the early stages when the number of COVID-19 positive cases was low.

Highlighting the lapses of the Government in stopping the spread of the deadly pandemic, he alleged that the Government had ignored the useful suggestions of Congress Legislators.

Referring to his Constituency, Dr. Yathindra claimed that there are lapses in the acquisition of land  for a housing project at Tandavapura and Adakanahalli villages. He wanted the Government to stop the land acquisition process until all issues are sorted out.

MLC R. Dharmasena said that the Congress party had extended full support to the Government in the battle against the deadly Novel Coronavirus. But the Government has indulged in corruption and has looted hundreds of crores of rupees in the purchase of medical equipment and kits, which has turned out into a big scam, he added.

Accusing the Government of withholding even payment of alimony for divorced women under the pretext of COVID-19, he said that the Government has utterly failed in protecting the interests of the people. He also said that now as the lockdown has been relaxed, the Government must make preparations for the conduct of Gram Panchayat polls.