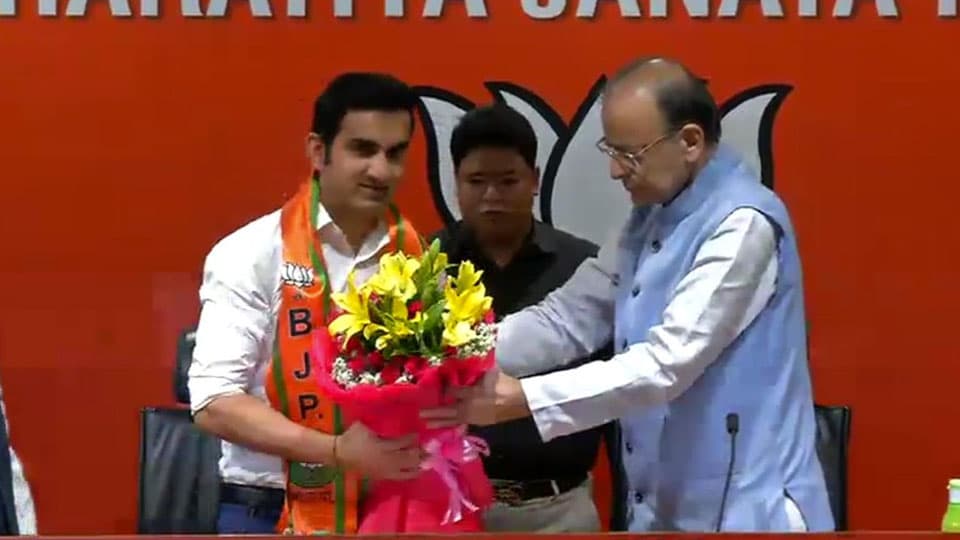 “I am impressed by Prime Minister Narendra Modi’s vision… I have contributed to the field of cricket and now hope to do more for the country”, the 37-year-old cricketer said.

Inducting the former cricketer into the party, Finance Minister Arun Jaitley said, “Gambhir has excelled in his career and the party hopes to utilise his talent. The BJP will benefit from his talent.” When asked if Gambhir would contest from a Lok?Sabha seat in Delhi, Jaitley said let the party’s election committee decide that.

With his reach of nearly nine million followers, the ex-cricketer has been frequently commenting on social and security issues leading to speculation that he was planning to join politics. He had, however, dismissed all speculation saying: “I have got a young family and I need to think about them as well because I have hardly spent any time with them. I do not want to miss their early days and let us see where I go from here.”

The former opening batsman was conferred with India’s fourth highest civilian honour, the Padma Shri award, earlier this year and received a congratulatory letter from Prime Minister Narendra Modi. A resident of Rajendra Nagar in Delhi, Gambhir made his one-day international debut for the Indian national team in April 2003 against Bangladesh and went on to play 147 ODIs for the side.

He also earned 58 Test caps and scored nine hundreds and 22 fifties in the longest format of the game. Gambhir’s  last appearance in an Indian shirt came in 2016 but he continued plying his trade in domestic cricket.

The 37-year-old announced his retirement from all forms of cricket following Delhi’s Ranji Trophy clash against Andhra  last December.