Home » News » Gearing up for disaster management must: DC Randeep 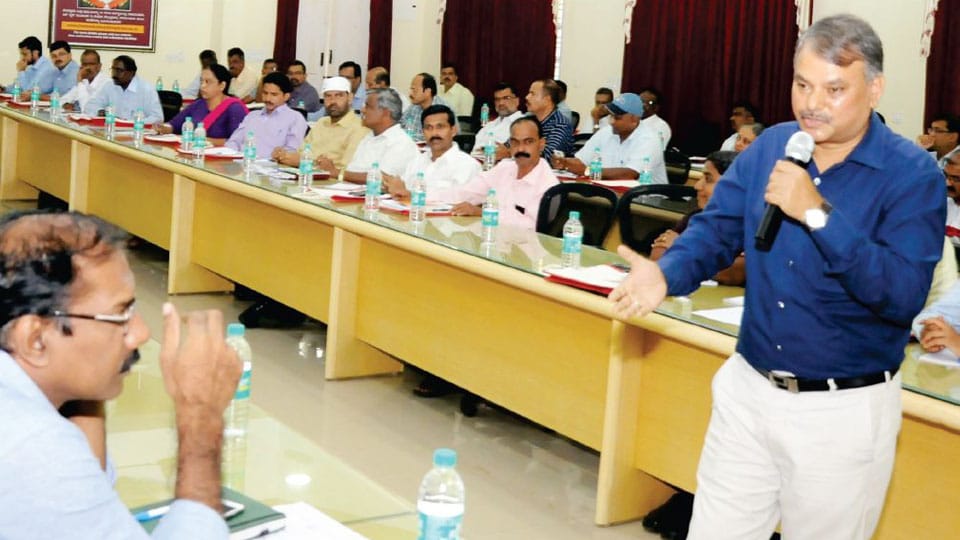 Gearing up for disaster management must: DC Randeep

Mysuru: Fighting natural disaster is like fighting a war and hence one must be completely geared-up to face it, said Deputy Commissioner D. Randeep. He was speaking after inaugurating a one-day seminar on ‘Reformulation of District Disaster Management Policy (DDMP),’ jointly organised by Karnataka State Disaster Management Authority (KSDMA) and Revenue Department at the Chamundeshwari Auditorium at the Regional Commissioner’s office, here yesterday.

Natural disaster causes such havoc that it does not even give time for the thought process to act fast. Though it cannot be stopped completely, the only way to bring down its effect is to control them to a certain extent, he said and added that the workshop would act as a platform to the officials to come out with strong plans to bring down the damage as much as possible.

“Authorities had never thought of rain creating a flood-like situation in Mysuru and Bengaluru. It was only after seeing its effect that the officials started to act. Instead, there is a need to be prepared in advance to face such situation,” he said.

Speaking on the occasion, KSDMA Director Dr. G.S. Srinivas Reddy said that despite State Government spending Rs. 10,000 crore to Rs. 15,000 crore every year for the drought management, it had incurred a total loss of Rs. 85,000 crore as the State was hit by drought situation continuously for four to five years.

It was important for the State Government to organise programmes for the officials to update themselves with respect to management of disaster-like situations, he added.

Workshop on various topics such as Disaster Vulnerability of Mysuru division and Management System; Sendai Framework of Disaster Management and Prime Minister 10 point agenda on DRR in India (ACMDRR) – an overview, Review of DDMP’s of Mysuru Division; Media Management in disasters and using of social media to mitigate disasters; Hazard, risk, vulnerability and capacity analysis (HRVC) – TTX activities, Strategic plan to mitigate disasters in the district and developments of smart cities, were held on the occasion.