The first half was that of the European country whose presentation was as gentle and elegant as their demeanour was, the second half being typically colourful and vibrant. It was like a gentle rain to begin with and ended in thunderous downpour in the mid-January, a befitting event to celebrate  Sankranti, the celebration of nature and its bounty.

The Lithuanian group called RATILIO and Karnataka group Adi Dravida Smskruti Kala Thanda were unique in the sense that neither of them were professional folk artistes of their respective region but their intense passion towards their culture was seen in their presentation.

While the RATILIO group comprised students pursuing academics at the Vilnius University of Lithuania, learnt their folk traditions to perfection to form the group, Vilnius University Folklore Ensemble, the Adi Dravida group, children of the pourakarmikas of Mysuru and surroundings, were brought together to be trained in the folk culture of their region. Both gave an impressive performance for two-and-a-half hours, enthralling the audience. 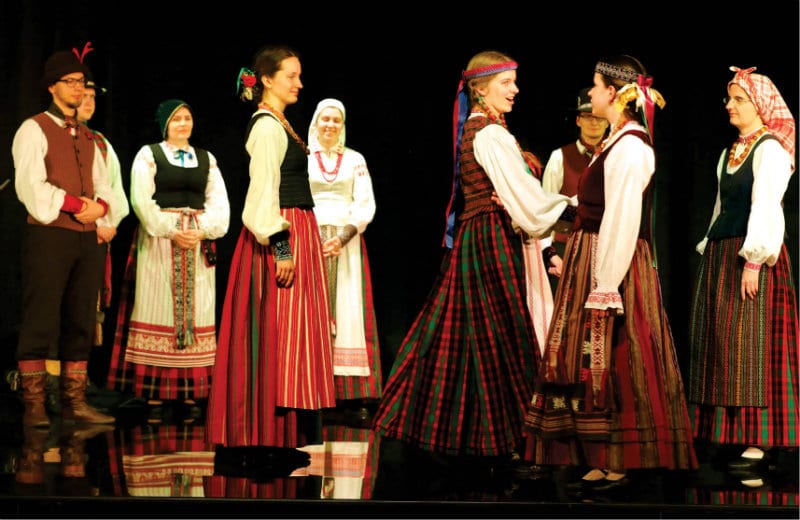 The name RATILIO nearly means CIRCLE; in India, the word RAAS means CIRCLE, it’s amazing to see the folk culture similarities, for all folk dances of the world are predominantly based in the fashion of circular movement. In fact, one need not be extremely trained in the art, but just join the group, follow and experience the joy of celebration of life. RATILIO drew inspiration from the mountains and rivers, the bears and goats, to romance and attitudes, using simplest of the instruments, sang in choir and chores, danced firstly for themselves experiencing the joy that the audience picked up infectiously and joined them with clapping of hands. The Adi Dravida group dwelled in all their rusticity, immersed in religious fervour and experienced a spiritual euphoria to the beats of variegated drums that spread amongst the audience.

The entire RATILIO group elegantly attired in their national dress entered the stage, meandered between songs and dance interspersed with instrumental music both stringed and wind, gave a seamless performance while the Adi Dravida group came in groups, danced vibrantly in 8 segments. Ratilios songs were inspired from the shouts of the herd boys to the military commands, the feeling of love and show offs while Adi Dravidas’ repertoire took us on a folk journey across Mysuru, South Canara and Shivamogga districts.

Venugopal, Director, ICCR Bengaluru, coordinated the ensemble of Lithuania while Sreenivas Kappanna mentored the children of pourakarmikas, Mysore B. Nagaraj presented the programme with élan.