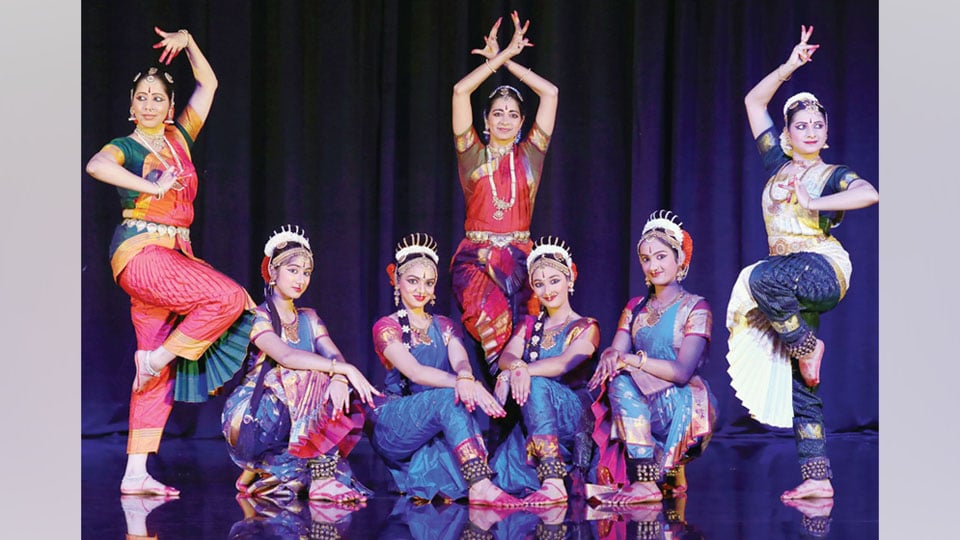 Patrons of Articulate Festival of Indian classical dance has religiously been dating, on every 3rd Sunday of the month, at the Premier Convention Centre, Premier Studios and on 21st January 2018, was the 20th occasion to savour Dance concert. Right from the moment the stage lits up, its pure entertainment sans guests, speeches, felicitations, release of souvenirs, etc. etc., As usual four artistes were lined up to share their respective art forms. The hall was already charged with spiritual fervour.

Bharatanatyam dancer, Rashmi Thaper invoked Ardhanareeshwara in her invocatory number that was set to raga Kumuda Kriya, Rupak Tala. The Muthuswamy Dikshitar’s composition on the duel gender principle of Shiva-Shakthi settled the audiance into a receptive mood of cultural arts. The number “Enu Bedali Hanuma Bhakuthi Ondanu Horethu”, extolled Hanuman who served ardently Lord Rama. The sequence of bringing Sanjeevini was beautifully enacted. Through The composition in Gorak Kalyan raga and Aditala, Rashmi gave a feel of Hanuman’s presence wherever leelas of Rama is meditated upon. Rashmi Thapar concluded with a Devi stuthi penned by Rashtra Kavi Kuvempu in shubha panthuvarali Raga and adi tala where she gave a perfect balance between benevolence and fury of the Mother Goddess.

In the second segment, Kavita Thirumalai of USA commenced her performance in Bharatanatyam with a traditional Pushpanjali in Gambheera natai, Khanda chapu tala composed by D. Srivatsa. “Anandamritakarshini” a Muthuswamy Dikshitar’s composition in  Amritavarshini raga and Adi Tala followed. Kavitha’s postures, stances and her gait was ethereal reflecting the sublime nature of the Goddess, the Nrutta that was interspersed did not upset the balance but only enhanced the object of her devotion. A Devaranama Gummana Kareyadire Amma of Haridasa Sri Purandara Dasa in Ragamalike saw the young Krishna pleading his mother not to call the monster and he will obey her and not be naughty as the gopis complained. The feigned innocence of Krishna unfolded in Kavithas portrayal of the naughty Lord before she ended her recital with a vibrant tillana on Rama in Sumanesha Ranjani raga and adi tala.

Sneha Narayan also performed Bharatanatyam commencing her recital with Sri Tanjavur Shankar Iyers composition “Ranjani Mrudu Pankaja Lochani”  Kruti on devi set in Ragamalika, adi tala. She proceeded to present a Shiva stuti “Shambho Shankara Shiva” where the marriage of Parvathi to Shiva was the central story that the dance revolved around. The penance of parvathy, Manmatha’s efforts to wake the meditating shiva, who under the Lords wrath turned to ashes and finally parvathi’s marriage to her beloved Lord unfolded with the restrained performance. Sneha showed her artistry through a very chirpy rendition of Krishna complaining to his mother that the boys were taunting him. Bala leelas of Bala Krishna was weaved through this song “Adahodalli adikombaru Nodamma”.

The concluding presentation was from the quartet that represented their Lasya Lahari School of Kuchipudi Dance. Guru Rajashree Holla’s disciples Mahima Holla, Sanjana Prasad, Prerana Wadhwa, Esha Mehtha enthralled the audience with their Kuchipudi art that was sensuous and alternating between naughtiness and romantic aura. The coquettishness of a devadasi who ventured to seduce Saint Vipranarayana was brought out seductively in a traditional Pathra Pravesha Dharu – vedelera vairalu drawn from “Vipranarayana Charitam.” This rendition was in Kedaragowla raga adi tala. While the devadasi was portrayed with abandonment, the concluding item tarangam was highly restrained while glorifying the fierceness of Devi who was ever ready to rescue her devotees from evil forces. Dexterous manipulation of their feet while perched on the rim of the brass plate, echoing the complicated syllables of the percussion was a befitting performance that lingered long after the concert concluded.

A sunday well spent, was the whisper of the satisfied audience, that wafted in the simple and yet functional auditorium.