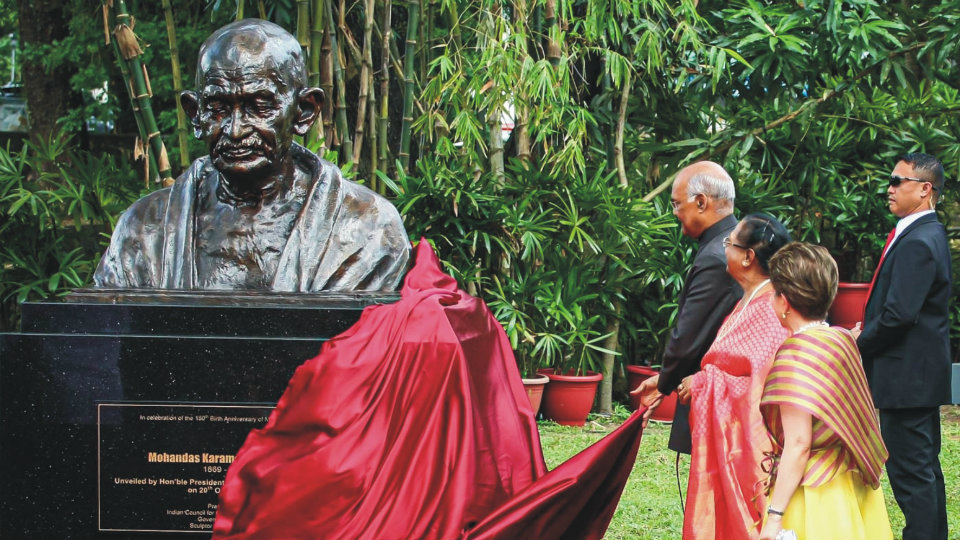 Manila: President Ram Nath Kovind yesterday unveiled the bust of Mahatma Gandhi in Manila, marking the 150th birth anniversary of the Father of the Nation and hoped that future generations would be inspired from his legacy of compassion, truth and ethics.

President Kovind took part in the event at the Centre for Peace Education in Miriam College in Manila, the Philippines, during his five-day visit to the Southeast Asian nation. “Today, I feel honoured to unveil his bust in the Philippines – the land of the brave Jose Rizal. I thank Miriam College for giving a place of respect to Mahatma Gandhi in its campus,” President Kovind said on the occasion.

“This bust of Mahatma Gandhi is a gift from the people of India to you. But the Mahatma belongs to all people, all cultures and all societies. May he continue to guide us in our shared journey of peace, harmony and sustainable development for all,” he said.

Drawing similarities between Mahatma Gandhi and Jose Rizal, he said that both the leaders believed in the power of peace and non-violence. “The avenue in New Delhi named after your national hero continues to inspire and motivate us,” he said.

Terming the relationship between the two countries as special, he said, “Our ties with your country and your people are not just special, but one that we keep very close to our hearts. It is a friendship that we celebrate and cherish always.”

The President appreciated the opportunity to celebrate Mahatma Gandhi’s legacy at the Centre for Peace Education — a Centre that promotes a culture of peace through education   and advocacy.

“The venue could not have been more appropriate. No doubt, generations of students who pass through your gates will continue to be inspired by his legacy, of being just and ethical in conduct; compassionate and humble in treating fellow human beings; and standing up and championing truth and truth alone, even in most trying times,” he said.