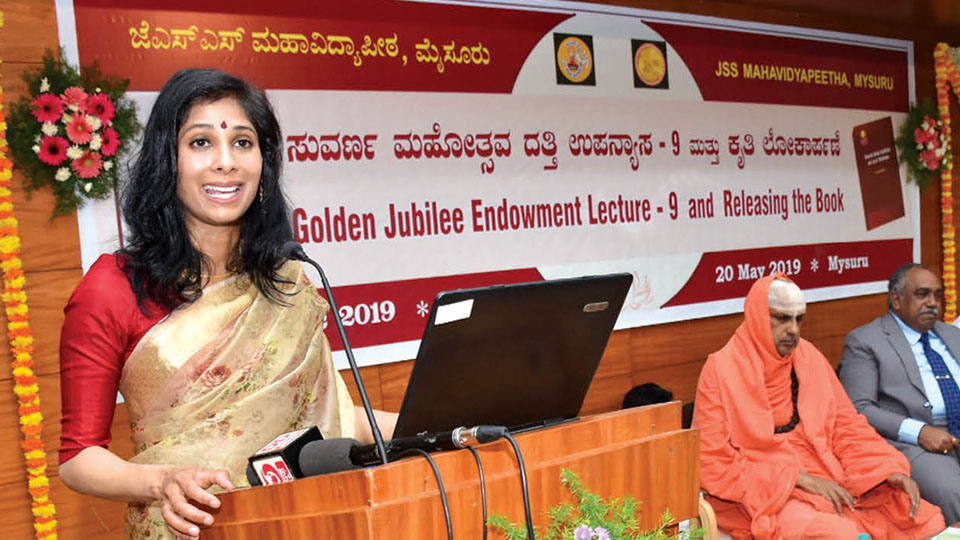 Mysuru: Globalisation results in increased trade and lower prices. It heightens competition within domestic product, capital and labour markets, as well as among countries adopting different trade and investment strategies. For instance, in India, there was zero per cent GDP at one time and in 1996 it rose to 20 per cent and in 2018 it is 29 per cent, said Dr. Gita Gopinath, Chief Economist, International Monetary Fund (IMF).

She was delivering a talk on the topic “Globalisation-Challenges and the Need for Co-operation’ as part of JSS Mahavidyapeetha’s Ninth Endowment Lecture series at Sri Rajendra Centenary Hall in JSS Hospital premises here this morning and said because of information and technology revolution in the last 30 years there is falling trade cost and favourable political development in the country.

There is modest increase in export share worldwide and when compared to total worldwide share India’s share is 14 percent, China 11 per cent and US 11 per cent. The reduction in poverty worldwide which stood at 42.8 per cent in 1981 has gone down to 9.9 per cent in 2016, she said

Global Attitude Survey shows that trade is under threat and hence the biggest losers from international trade are always those whose skills have a cheaper competitor in a different market. So, in the case of the US, it’s been those who work in the manufacturing sector because jobs in the manufacturing sector have been outsourced to countries where labour is far cheaper. Hence, more co-operation is needed in such areas, said Dr. Gopinath. 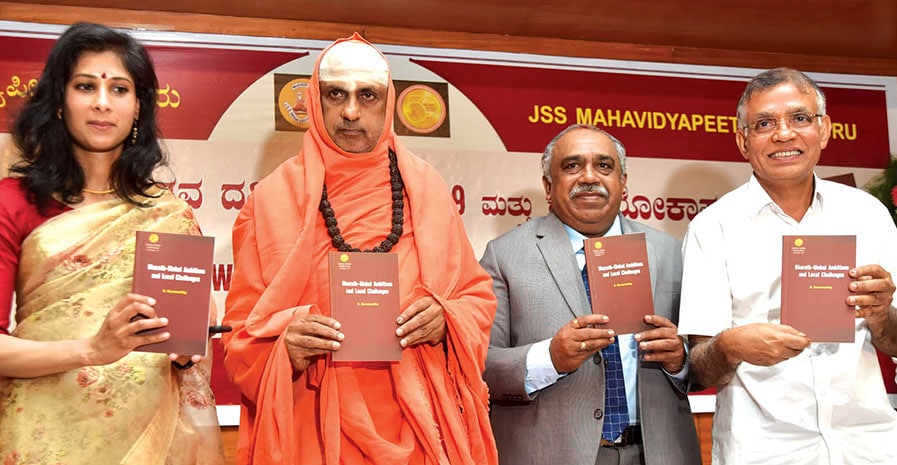 It also shows that when there is an increase in global temperature there is a fall in GDP (Gross Domestic Product). Thus the new multilateralism is dedicated to improve the lives of the citizens world over and the economic benefits of globalisation are shared much more broadly, she said.

The additional transnational challenges that are being faced include cyber crime, corruption, massive influx of refugees and climate change, she pointed out.

Earlier, Bangalore University Vice-Chancellor Dr. K.R. Venugopal releasing the book ‘Bharat Global Ambitions and Local Challenges’ by S. Gurumurthy said that India was economically in the forefront between  the 11th and 14th centuries when the GDP stood at 36 per cent, while in the 16th century China was second and in 17th century it was equal to India.

Thus 500 years ago, we were economically strong and we were also very good in acquiring knowledge. For example, going back in time in Nalanda University there were 90 lakh manuscripts and these are the nuggets of information found in the book of Gurumurthy, he said.

Suttur Seer Sri Shivarathri Deshikendra Swamiji in his address said that there are poverty alleviation programmes in all the countries in the world. However, when it comes to the good quality products available in one’s country, people prefer the ones imported from outside. These are the challenges that Dr. Gopinath has spoken about, he added.

Lauding Dr. Gita Gopinath’s achievements, he said that it was due to the discipline and hard work that she had  shown that she was able to raise to such a level.