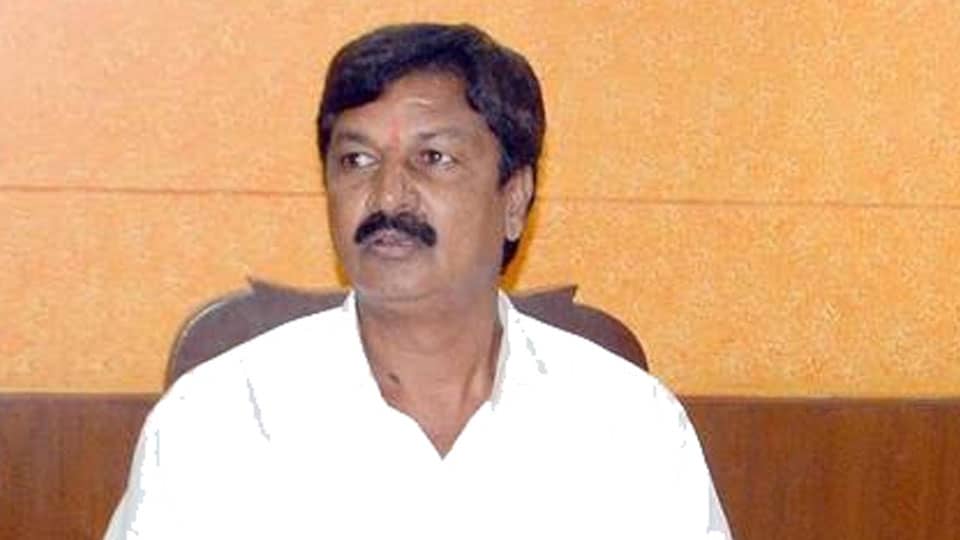 Bengalur: High drama was witnessed in Gokak town of Belagavi district this noon when a person, said to be a staunch follower of former Water Resources Minister Ramesh Jarkiholi, was critically injured after he jumped on the burning tyre at Basaveshwara Circle in Gokak.

This incident occurred when the followers of Jarkiholi were burning tyres to block movement of vehicles in the town against what they termed as ‘deep-rooted conspiracy’ to besmirch the image of their leader following the release of the sex CD to the media by social activist Dinesh Kalahalli, who alleged that the woman in the video clips was enticed by the Minister with a Government job offer.

At that moment, a person emerged from the crowd and jumped on the burning tyre. He was caught in the flames and the hot tyre rubber stuck to his body. The injured person has been identified as Ganapati Rajput of the town.

Police personnel were shell-shocked over the incident and rescued him by pouring water on him. An ambulance was summoned to shift the critically injured person to the hospital.

Since morning, the die-hard supporters of former Minister had hit the streets seeking stern action against Dinesh Kallahalli, a Bengaluru-based social activist, who handed over the alleged sex CD of Jarkiholi to Bengaluru Police, seeking action. As precaution, North West Karnataka Road Transport Corporation (NWKRTC) stopped plying of buses to and from Gokak town.  Autorickshaws were off roads. Students were forced to walk to their Schools and Colleges. All business and commercial establishments remained closed since morning. Even road-side vendors were forcefully evicted from the streets. Jarkiholi’s supporters claimed that their leader had been ‘fixed’ by his political opponents and demanded for his re-induction into the Council of Ministers till inquiry. Dinesh must be arrested by Police to know the persons behind this CD scandal.

Meanwhile, talking to reporters in Mysuru, former CM and Janata Dal (Secular) leader H.D. Kumaraswamy has urged the Police to give ‘aeroplane treatment’ to all those who were claiming to have the sex CD of a few politicians of the State in their possession.

Kumaraswamy said he was not talking in favour of former Water Resources Minister Ramesh Jarkiholi, who was forced to tender resignation after the CD containing the sleaze clippings were released, but such kind of ‘blackmailing’ should be stopped immediately.

Some miscreants target politicians and blackmail them. “The Police must take note of such persons who claimed to have the sex CDs of politicians and it must be made public by the State Government. Dinesh has claimed that a former CM was behind Jarkiholi’s sex CD. The Cops must interrogate him to know who is that, since there are many former CMs in the State, including me.”