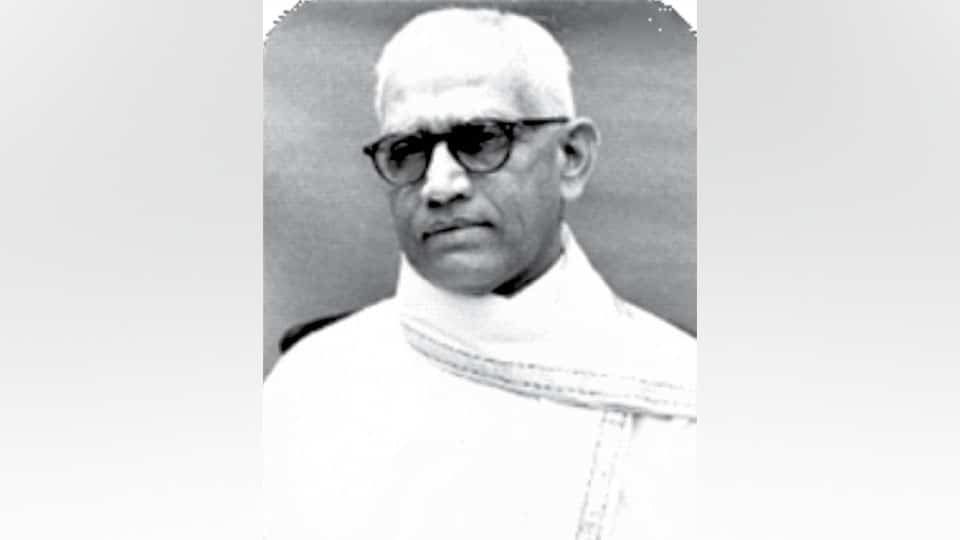 Recently, I was invited to attend a music concert at Veene Seshanna Bhavan in city. The invitation came from Neeraja Achyuta Rao. The concert was really wonderful and everybody including myself enjoyed it.

This concert was arranged in the revered memory of (now late) Prof. H. Yoganarasimham from Holenarasipura. He was the Principal of Maharaja Sanskrit College. A strict Principal, anybody who wanted to meet any staff member or a student had to take permission from him. However, nobody could meet him directly. There was an Office Assistant by name Danaiah. In this connection I would like to recall an incident mentioned by my father late A.S. Vishwanatha Sastry.

One day my father wanted to meet my grandfather Aradikoppam Subramanya Sastriji, who was Professor at Sanskrit Patashala to convey some urgent message. Naturally he was asked to fill in a slip mentioning the purpose, the urgency and the duration of the meeting, which happened more than 80 years ago. When I asked my father as to why he was made to wait, he informed me that it would have disturbed the class routine of my grandfather and also would have drawn the attention of the other staff and students disturbing the learning atmosphere.

After my retirement from the University of Mysore almost twenty years ago, on further reflection I came to know that Principal Yoganarasimham was maintaining discipline which was the right thing to do. Yoganarasimham had his higher education in Mysore and took his BA degree in 1918 from Maharaja’s College. He obtained MA degree in 1921. After completing his MA, he entered into Mysore Government service. His first assignment was Sanskrit Inspector of Schools and later promoted as Principal of Maharaja’s Sanskrit College in 1929. He became the Principal of Bangalore Sanskrit College in 1937. After working in various places, he retired from Government service in 1952. He was a consultant to Mysore Akashavani also. Then he  was Professor in Sanskrit at Sarada Vilas College, Mysore. Again he went back to Bangalore in 1966.

Yoganarasimham worked almost incognito without giving much publicity to his work as the Principal. The entire family of Yoganarasimham was illustrious and did social service. His wife Saraswathamma (now late) had started an organisation for children called Mysore Makkalakoota. She was the blood and soul of this organisation. Yoganarasimham’s eldest son H.Y. Sharada Prasad was Media Adviser to Indira Gandhi.

In those days as students we were taken on excursions to various places and New Delhi was a must. One of Yoganarasimham’s sons H.Y. Rajagopal was my classmate in High School. Later he took to engineering and we parted ways but were in correspondence. He used to telephone to me or send email from USA enquiring my welfare and my academic activities. Unfortunately he also passed away recently.

Now coming back to Makkalakoota, I used to go to their house, which was very near to my school. Saraswathamma used to narrate stories of patriots who laid down their lives for the sake of this great country. Tears used to roll down from our eyes. That was the powerful way of telling stories by Saraswathamma. While narrating stories, she used to give healthy and tasty food to all the students.

The couple Yoganarasimham and Saraswathamma had eight children and it is noteworthy that they made a mark for themselves in their chosen fields. However, Sharada Prasad was the most illustrious of these children being Media Advisor to three Prime Ministers of India. I must hasten to add that other members of this family were equally illustrious. One of his daughters Neeraja Achyuta Rao is a famous Karnatak classical musician.

In addition to his busy schedule as the Principal, Yoganarasimham found time to contribute greatly to other fields also. He was an author too. Among the books he wrote mention may be made of Manassilladmadve (Marriage without any liking) which appears to be a farce. He also translated many books from English to Kannada. Some of them in this category are the life of Maharshi Karve, Bertrand Russel’s Conquest of Happiness and Gitakusumanjali. He also acted in dramas.

His book of music compositions Swarakusumanjali (published 10 years after his demise) contains 36 compositions of 10 different forms. Pleased with the quality of his compositions, Bharat Ratna M.S. Subbulakshmi has sung some of Yoganarasimham’s compositions in an exclusive cassette released in 1986. Due to incessant heavy work as Principal and as a composer of music, and his incessant cultural activities, he became one with music and passed away peacefully on 14th May 1971. Hundreds of music-lovers and educationists mourned his death. Many condolence meetings were held both in India and abroad. With Yoganarasimham’s death, a golden age in music and Sanskrit education came to an end. His wife Saraswathamma died in 1993.

Yoganarasimham was greatly influenced by Rabindranath Tagore and hence had visited Shantiniketan. He had specially learnt the beautiful Bengali song Ai Bhuvanamanamohini and taught this song to his children and also to students in the College. When Tagore visited Mysore in 1942, Yoganarasimham had arranged a felicitation function at Nishad Bagh in Mysore.

In a commemorative volume brought out to celebrate his birth centenary, Yoganarasimham’s contemporaries have paid glorious tributes to the work done by him. V. Sitaramaiah, another celebrity, has admired his sterling qualities. Justice Nittoor Srinivasa Rao has written that even Prof. Hiriyanna used to admire Yoganarasimham’s qualities of head and heart. Veena Doreswamy Iyengar was a great Veena player of those days and he has paid handsome tributes to Yoganarasimham.

To commemorate this great composer and Sanskrit scholar, an organisation by name Devageetham Foundation has been started. Musicians and Sanskrit scholars have voluntarily donated huge amounts of money, so that this Trust can arrange music concerts and help deserving musicians. There is also a plan to construct a building worthy of this great musician. That monument will be a fitting tribute to Prof. Yoganarasimham.

Prof. H. Yoganarasimham has become immortal by his scholarship and music compositions. All that now remains are the sweet memories of this illustrious scholar and we seek his blessings for our lives and our generations to come.

PS: I am grateful to Neeraja Achyuta Rao and Mukund for providing a close insight about this illustrious family.