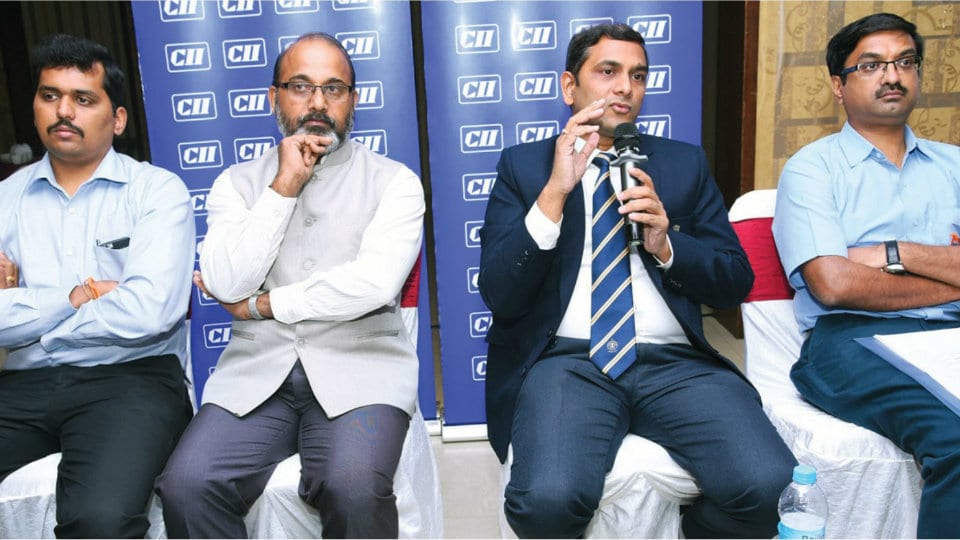 Mysuru: “Earlier, that is before the implementation of GST, the taxes were not visible to the public in the way they are now or in the quantum they are now,” said Ravi Kiran Edara, Joint Commissioner, Central Excise and Customs, Mysuru.

He was speaking at a seminar on ‘GST Law’ organised by Confederation of Indian Industry (CII), Mysuru here recently. “After implementation of GST people are feeling they are paying more; earlier they were paying tax in the form of VAT and service tax. There is a lot of transparency that is going to come because of GST. One of the major advantages of GST is that the compliance gap will be reduced. Whatever benefits the government gets through GST will be given back to the people,” he said.

“The beauty of GST is that there is lot of flexibility for the government; the State and Central governments through various means are periodically accessing the ground situation. Several Joint Secretary Officers are specifically tasked to monitor the price rise. Every district is having Nodal Officer who will be in touch with Joint Secretaries concerned. Monitoring is happening at highest level. One more advantage of GST is based on ground reality. Anytime government can modify the tax, which was not there earlier as one had to look for the annual budget,” he said.

“In fact we have almost crossed the stage where we used to give speech or talks about GST. If we see Malaysian experience, the latest country which implemented GST there were several issues faced by them. The major GST issues are related to GST network. Four days back even Finance Minister Arun Jaitley told that GST implementation was smoother than expected. In no country GST was followed without any glitches, the same happened to India and the few glitches the government is addressing time to time,” he said.

Migration of existing taxpayers is smooth. There are several issues with regard to filing of returns. Recently during review meeting at the Chief Commissioner level many of the issues were related to restaurant and hotels only, said Edara.

He also mentioned that composition levy is not for those having restaurants and called upon the hotel owners to clearly mention why they are not charging GST.

During the day-long seminar place of supply, time of supply issues, transition issues, valuation, principles of classification under HSN and under GST, issues related to exports, a detail demo on filing of returns, TRAN 1 and issues, Employer/Employee related and Input Tax Credit, payment of GST were discussed.