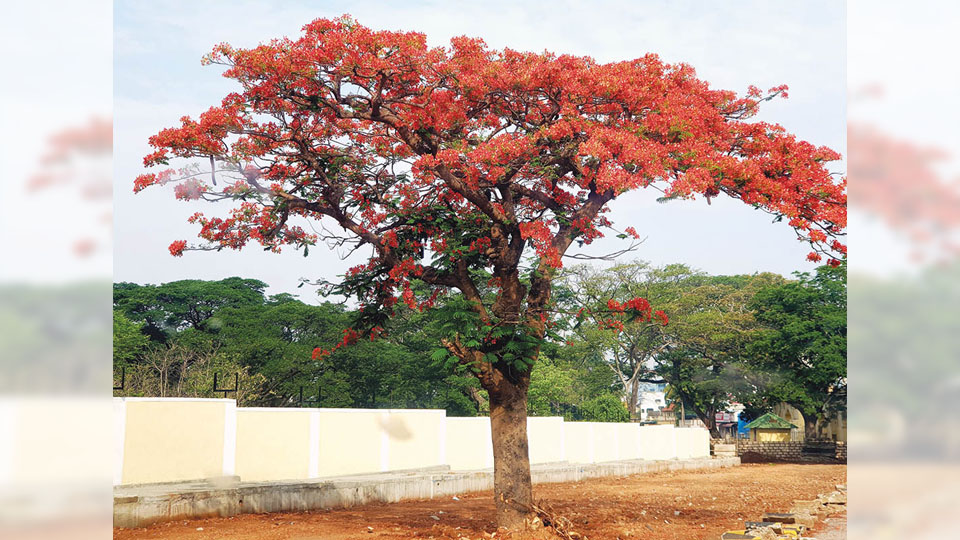 Last week I had written about a young and robust Gulmohar tree in full bloom that was about to be axed down due to the ongoing road widening work near our Government Guest House. I had even wondered if some group of nature-lovers or philanthropic organisations could come forward to sponsor the relocation of this tree to a prominent place in the grounds of the Guest House so that it could add grace to this already graceful edifice which was built way back in the year 1805.

I had nursed much hope that this would be possible for two reasons. Firstly, because these days relocating fully grown trees is not a very difficult or daunting task considering the easy availability of equipment like JCBs and cranes. Operations like this are being done day in and day out, all over the world with very encouraging results. The second and more important reason for my hope was because our city is full of many groups of very concerned citizens who are always ready to come forward to do any kind of good both to our city and its surroundings.

Here I would like you all to recall how the Rotary Royals of Mysore, completely unmindful of the great cost, came forward some years ago to save a huge banyan tree which was doomed to die during road widening by relocating it to the edge of the Lingambudhi Lake. I had even written about this operation in my weekly column. On the very evening of last Friday when the picture of the Gulmohar tree was published in SOM, my son Adnan came back home beaming with an announcement that a group of his friends, led by his former classmate Ritika, was ready to sponsor the operation to save the tree. Just a few hours later I also received a mail from Chartered Accountant Ravi Subbaraman and his wife Saras of Yadavagiri informing me that they would be interested in joining any effort in this direction. I was overjoyed beyond measure that Mysureans were being so proactive but my joy was very short-lived, only lasting long enough to make me lose my sleep in expectant elation for just one night.

Early the next morning I rushed to the spot where my tree stood to see whom I could beseech there to spare it for a few more moments only to find it lying prostrate in three pieces ! It had been felled the previous evening itself ! There is a well-known saying that ‘Sorrow, like joy, soon passes away’ that I first heard as a child in the war movie; Tora, Tora, Tora. Thankfully this is exactly what happened in my case too.

Just four days later, after it had rained the previous night, my wife and I were out on an early morning drive to the Chamundi Hill, as we invariably do whenever it rains here in our city. A drive across the countryside during or soon after the rain is how we ‘celebrate’ the rains in a strange, age-old family tradition. It may seem rather odd to some folks but for us it is one of the greatest joys of living on this earth !

As we were driving back from the Nandi we found that cement bird baths with the logo ‘NMF’ had been placed here and there and plastic bird feeders had been fixed to the roadside trees at regular intervals. A closer look revealed the name of ‘Namma Mysuru Foundation’ on them. I had never heard about this group but I came back home feeling very happy that someone, somewhere was doing some much needed good to our city. When I searched the net I found out that this organisation started by C. R. Pavithra and based in Lakshmipuram is an NGO involved in protecting our heritage and beautifying our city by planting and saving trees and conserving our fauna and flora. May their tribe increase and may I bump into them sometime soon so that I can thump their backs hard !

READ ALSO  Wadiyar was elected with a record margin of votes in 1989...and in 2014, Pratap Simha got highest number of votes

Another bit of news that appeared in SOM very recently that cheered me up no end was that an organisation called the Jeeva Daya Jain Trust was giving away bird houses and bird feeders for free to anyone interested in saving birds and encouraging them to visit their gardens. Again a very great act of kindness and concern indeed for our environment! I called them up to collect a bird feeder for myself but was politely told by the lady at the other end that I was a bit too late as they were all gone in less than half-an-hour after they started giving them away ! I had missed the bus this time too but I was happy that my city was full of such good souls !

Not to be outdone by my own tardiness that failed to fetch me my bird feeder I decided to make one myself. In less than ten minutes I was able to fabricate one from an old plastic jar and a plate and lo and behold, it is now drawing birds to our garden like bees to nectar !

Dr. K. Javeed Nayeem Mysuru Over a cup of evening tea
Art is long, Life is short
Startup Window: The Future of Food-Tech event on May 6

2 COMMENTS ON THIS POST To “Gulmohar gone forever… But Hope lives on !”