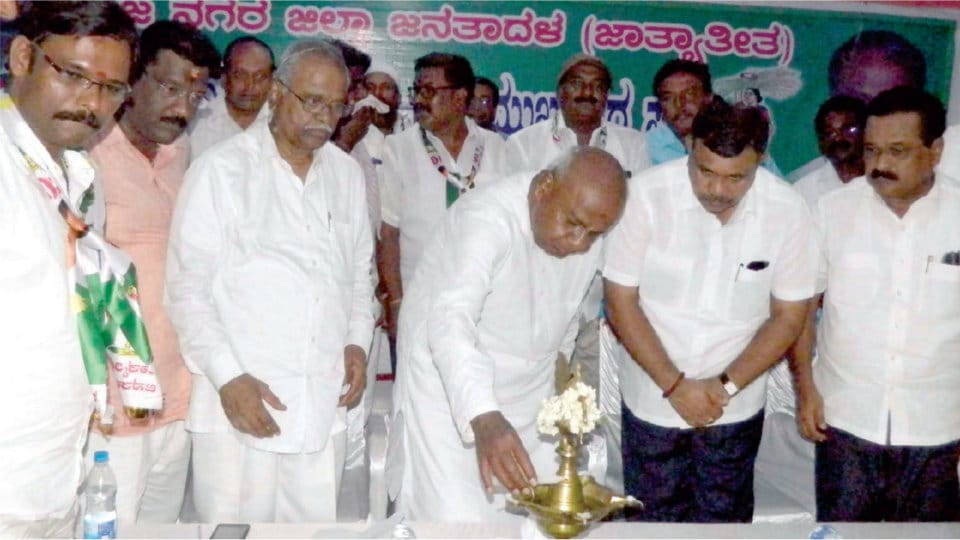 Addressing party workers at a private Hotel on Sathyamangalam Road here yesterday, Deve Gowda said that the JD(S) will field candidates in all the 224 Assembly segments.

Replying to a question on why the party did not field its candidates for the Nanjangud and Gundlupet by-polls held recently? Deve Gowda defended the party’s stand stating that the JD(S) could not match the money power of Congress and BJP.

He also asserted that no one can finish off the JD(S) in the State. Maintaining that the JD(S) was not a family and casteist party, Deve Gowda said that the party will give due representation to all communities.

MLCs Marithibbegowda and K.T. Srikantegowda too addressed the party workers.

Many Congress and BJP leaders joined the JD(S) on the occasion. Former MLC H.C. Neeravari, District President Kamaraj and other office-bearers were present.

In an interesting Development, Chamarajanagar Congress MLA C. Puttarangashetty fell at the feet of Deve Gowda.

Deve Gowda, who left the town’s TB after taking some rest,  to address the party workers, was in for a pleasant surprise when Puttarangashetty presented him a shawl and   fell at his feet.