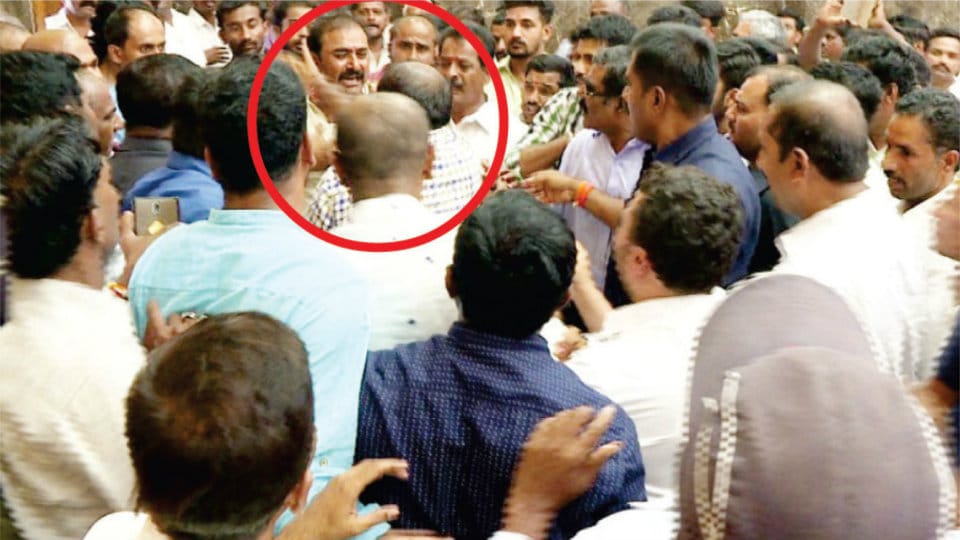 When Kumaraswamy was leaving the hall after attending the meeting, a few supporters of Chamundeshwari MLA G.T. Devegowda approached him demanding ‘B’ form to Devegowda’s son G.D. Harish Gowda for Hunsur Assembly segment.

When Kumaraswamy explained that he came to attend the meeting and not to distribute the party ‘B’ form, a few supporters of G.T. Devegowda raised their voice against him. Kumaraswamy, who lost temper reportedly walked into the crowd and slapped a party worker.

Kumaraswamy in denial: However, Kumaraswamy clarified that he did not slap the party worker, but prevented him from touching his feet.

“The party worker came to touch my feet seeking ‘B’ form for MLA G.T. Devegowda’s son Harish Gowda to contest from Hunsur. But I avoided him from touching my feet”, Kumaraswamy said.

It may be recalled here that Kumaraswamy, who had come to attend a party workers meeting at a private hotel here a couple of months ago, had given a dressing down in full public view to city JD(S) President Harish Gowda, who sought to contest from Chamaraja Assembly segment on the party ticket. Kumaraswamy had then also rebuked Harish Gowda by asking the party workers to throw him out of the meeting for creating ruckus along with his (Harish Gowda) supporters.

Harish Gowda himself a strong party contender for the seat, was said to be upset over reports that former University of Mysore Vice-Chancellor  Prof. K.S. Rangappa may get the JD(S) ‘B’ form for Chamaraja constituency.