Home » Columns » Abracadabra By K. B. Ganapathy » Half a Century of Non-Performing Governance of India ! –1 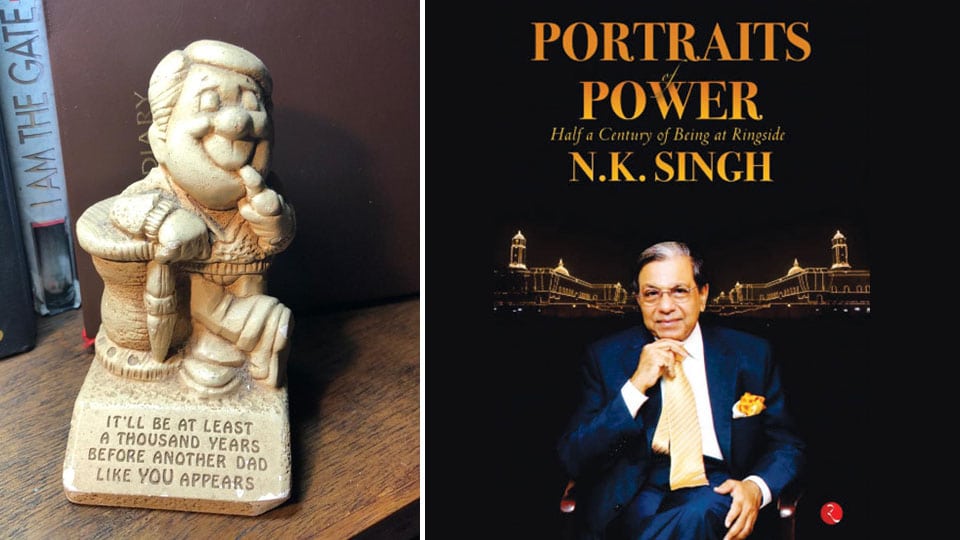 Half a Century of Non-Performing Governance of India ! –1

A couple of weeks back I was talking to R. Chandra Prakash, a former Professor in Manasagangothri and later the Registrar of Kuvempu University, Shivamogga, who was also the former President of the NGO Mysore Grahakara Parishat (MGP).  He mentioned that he was reading an interesting book “Portraits of Power – Half a Century of being at Ringside” by  N.K. Singh, IAS (Nand Kishore Singh), who served in Delhi in many offices ending up as a Rajya Sabha MP.

I got the book per Amazon in the next couple of days and finished it reading last Saturday. It was a good reading for me being a journalist during the author’s period in office.

It is less an autobiography and more a self-admiration of assumed great performance as a civil servant in the Central  Government for decades under different Prime Ministers. Reading the book, I was reminded of what Professor John Kenneth Galbraith of Harvard University, who was the  American Ambassador in India during the Kennedy era, had said of books:

“Books can be broken broadly into two classes: Those written to please the readers and those written for the greater  pleasure of the writer. Subject to numerous and distinguished exceptions, the second class is rightly suspect and specially if the writer himself appears in the story.”

Well, in this book the writer himself, perforce, appears in the story. In fact, it is his story of glory! Full of I, me and myself. There was nothing negative about so many individuals who pass through the pages like shadows of ghosts while the author appears like a knight in shining armour. Born with the proverbial silver spoon in his mouth, into a zamindar’s family in Bihar (origin traced to Rajasthan) his father, an ICS Officer of the Raj days, transiting into free India, indeed a lucky person to the manor born.

In the 18th century (1770) his ancestors migrated from Rajasthan to Bihar following a marriage alliance. N.K. Singh’s maternal grandfather Beer Narayan Chand was a celebrated zamindar and popular with the farmers that even Mahatma Gandhi thought it was a good idea having this family on his side as it would give a ‘major fillip’ to the agitation against the British. He was a member of the Bihar Legislative Council for many years.

Here is an interesting episode narrated in the book which shows how wealthy a zamindar N.K. Singh’s maternal grandfather was. Once he was driving Jawaharlal Nehru in his old Pontiac car around Purnea and the adjoining districts. Nehru enquired to whom those tracts of land belonged. The zamindar said it belonged to him. Nehru then fell into sleep. After one hour Nehru woke up and asked the same question and received the same answer. Apparently Nehru was surprised that a zamindar could hold so much of land.

Of course, Nehru got the Bihar Government to pass the Land Reforms Act 1950 to abolish the zamindari etc. I was left wondering that but for this incident the pernicious system of feudal zamindari, jagirdari, inamdari etc., of the era of Muslim rule and of the Hindu Rajas would have continued for some more years in India. Who knows!

READ ALSO  An appreciation: Who is she?

And this Land  Reforms Law was not passed in all the States, all over India. I think in Karnataka we needed Devaraja Urs as Chief Minister to deal with this feudal legacy. I also wonder why Vinobha Bhave’s Bhoodan Movement (a movement for voluntary surrendering of land) was needed when the democratic government itself could have passed proper laws to undo this evil of individuals holding vast tracts of agricultural land. And imagine much of the land thus given voluntarily was mostly barren, uncultivable land, according to reports of those days.

The author also says, with some pride, that his grandfather gave several hundred bighas (acres) of land as donations to the Bhoodan Movement!

The author’s father Tribhuvan Prasad Singh (T.P. Singh) was an ICS Officer. When his father returned to India from London he underwent a purification ritual before being accepted back into society. Hindu society!

N.K. Singh’s father T.P. Singh had six children — two sons and four daughters. Two daughters became IAS Officers, one an MP and another married to an IPS Officer. While N.K. Singh himself became an IAS Officer, the other brother became an MP.

It is indeed amazing, nay a miracle, the whole family had monopolised a part of India’s bureaucratic and political space. Coming from such a background, the author of the book N.K. Singh had every opportunity to rise in the bureaucratic hierarchy and be in the creamy layer of the India’s political and bureaucratic elite.

By the way, his mother was a Congress MP who died in 1989 and her son (Uday) became the MP from BJP for two successive terms from Purnea, his mother’s Constituency. Thus N.K. Singh’s family is also politically strong being good to Congress and BJP — a feat indeed, apart from such huge favours from providence. I do not think in the whole country there is any family with such abundance of bureaucratic and political blessings as that of N.K. Singh’s.

This sentiment of blessings takes the reader to the world of superstition too. N.K. Singh writes of how at Rajiv Gandhi’s request his mother had to vacate her House No. 4, Circular Road, allotted to her by Mrs. Indira Gandhi and proved lucky, to Giani Zail Singh who was not renominated as the President of India and was looking for a house. His choice fell on this house and his wish was granted.

N.K. Singh writes: “The new house did not prove auspicious for us, though. We lost many family members while residing there, including my mother, leaving behind a superstition.”

The next chapter 2 is all about “my father”; nowhere could I find his father’s name T.P. Singh. (The surname Singh with initials is so confusing for one like me to remember — is it T.P. Singh, K.N. Singh, N.S. Singh or L.P. Singh? And then is it a Sardarji Singh, Punjabi Singh, Rajasthani Singh, UP Singh or MP Singh. Gosh!). He, as a good son, showers his father with encomiums no end.

Remembered: On my birthday my younger son sent a marble statuette with an inscription: IT’LL BE AT LEAST A THOUSAND YEARS BEFORE ANOTHER DAD LIKE YOU APPEARS (see picture).

In this chapter what roused my interest was what he (N.K. Singh) had written about the encounter his father (T.P. Singh) had with that iconic figure of Indian administration, the Founder of the National Dairy Development Board (NDDB) and the Mother Dairy, in short the Amul Milk Dairy Dr. Verghese Kurien. N.K. Singh quotes from Kurien’s book “I Too Had a Dream,” which says how political and bureaucratic interference stymied innovative decisions within the bureaucratic system.

N.K. Singh writes: “In a meeting with my father as Agriculture Secretary, Kurien mentioned that some of his (T.P. Singh’s) colleagues, particularly the Joint Secretary and the Director in the Ministry, had sent a file of complaints to the Ministry of Law and Justice against Dr. Kurien, stating that he was erroneously heading both the NDDB and the Indian Dairy Corporation (IDC), which was illegal” (as per legal opinion).

Dr. Kurien recounts: “I stood up and told T.P. Singh that if this were the case, I would submit my resignation immediately from both NDDB as well as IDC.

“He (T.P. Singh) looked at me and said, I have not yet finished, so please sit down. I do not know why my officers are doing such destructive work. We — this Ministry — made Dr. Kurien Chairman of the NDDB. This Ministry then went ahead and made him Chairman of the IDC and now this same Ministry starts a file saying this is ‘illegal.’ It is like a woman calling her own son bastard; This is absolutely terrible.

“The Joint Secretary and the Director (who were apparently present) were visibly flustered and nervous at their Secretary’s (T.P. Singh’s) outburst… ‘I know you fellows well. Now this file will remain here and only I will handle it. You are not to touch this file’.”

“You see, what these fellows do not understand is that legal opinion is merely an opinion. It is not the law.”

Hellow, do our politicians and bureaucrats who often take ‘legal opinions,’ hear this? I have found many heads of organisations taking this route of ‘legal opinion’ to fool the dissenters and the members. This kind of legal opinion also enables or facilitates corruption.