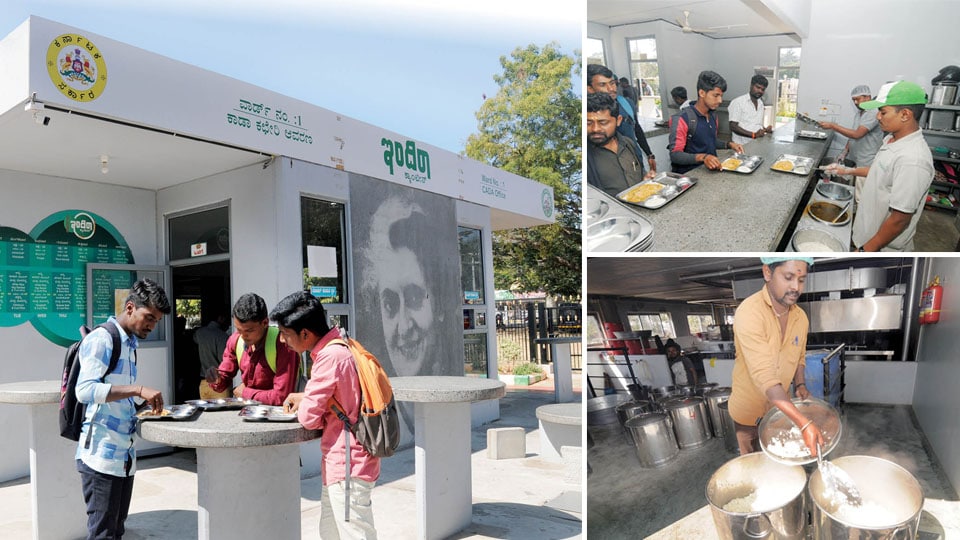 Indira Canteens, launched by previous government headed by Siddharamaiah, have served lakhs of meals to Mysureans since the past one year. The scheme was launched exactly a year ago (Jan.11, 2018) and the consensus so far: It’s a healthy, tasty and affordable option for all, but especially for the poor and those who need to grab a meal on the go. There are a few negative voices too, but as they say, negativity is a part of any government scheme. Many say the canteens have made a difference when it comes to serving low-cost, hot meals to the urban poor. The canteens were primarily targeted at autorickshaw drivers, construction labourers and daily wagers.

Star of Mysore team looks at the response to the scheme by visiting all the 11 canteens in city and comes back impressed as a majority of people who frequent the canteens are satisfied with both food and service.

A morning at Indira Canteen

At 07.30 am every day, the gates are thrown open and the crowds rush in. There’s some pushing around but all of them fall in line with and the queue just expands. Though the queue moves quickly, many in the line are eager to grab the first meal of the day with salivating mouths, growing impatient if the queue does not move.

They walk up to a small window, hand over their money and receive one or two green plastic tokens, which are then exchanged at the counter for food. They pick up their bright yellow trays and move to a table in the room or outside in the courtyard to eat.

The food is fresh, warm, flavourful and delicious. And the best part is that each dish (breakfast) costs a mere five rupees and lunch at ten rupees, which is as good as free.

Eating out cheap is indeed pleasure

Indira Canteen, one of the ambitious ‘food for all’ projects of the Government, is completing one year today in Mysuru. It has drawn all-round appreciation from thousands of poor, hungry masses, apart from labour class, autorickshaw drivers, school and college-going students, who eat here every day.

Demand in a few canteens

In every canteen, arrangements have been made to serve breakfast, lunch and dinner each day for 500 people. However, in a few canteens not more than 300 people partake breakfast or food.  But wherever there is more demand, larger quantities of food is being supplied.

Facility for Pourakarmikas too

From Oct. 4, over 2,426 Pourakarmikas working in 65 wards are being served food. Every day at 11.30 am, food is taken from the kitchen to all the 11 Indira Canteens in autorickshaws for the benefit of Pourakarmikas.

The Indira Canteen near Alanahalli Junction on Lalitha Mahal Road is frequented by daily wage workers and students. Hundreds of daily wagers coming from T. Narasipur, Bannur and surrounding villages who descend on Mysuru everyday to earn a living, depend on the low cost Indira Canteens. These daily wagers eat breakfast served between 7 am and 8.30 am and go and wait near circles for work contractors to pick them up.

The canteen in front of Beedi Workers Hospital on Double Road at Shanthinagar majorly caters to school-going children’s lunch. Parents come with lunch boxes and fill it with breakfast for the students to eat at school during lunch time.

There is good response at the canteen on Dr. Rajkumar Road near RTO West in Kalyanagiri, where garage mechanics, workers, auto drivers, and those visiting RTO Office come to have breakfast and lunch.

Lack of staff at a few canteens

The 11 Indira Canteens started in the city last year for the poorer sections of the society and that too to the labour class are running quite efficiently except for one or two problems.

The canteen in K.R. Hospital is a boon to majority of patients who come there. Instead of visiting the nearby hotels and pay more, they can fill their stomachs at very little cost here. Everyday more than 400 people eat breakfast, lunch and dinner here. There are instances of people returning without getting lunch as it gets over fast.

The canteen near Overhead Tank in Sharadadevinagar has a lot of demand for both breakfast and lunch. Not only labour class but also employees of shops surrounding the area depend on this canteen. Everyday more than 300 people have breakfast and lunch. But shortage of staff is a problem here.

There is no fluctuation in taste of food and is served hot. For daily wager Nagaswami who comes from Kavalande in Nanjangud taluk, Indira Canteen is a boon. He comes by train everyday and has his breakfast and lunch here.

Mangalamma, who ekes out a living working as a housemaid, however, has her own self-esteem. She does not eat anything given at the houses she works. She has developed a taste for the food at Indira Canteen. She has breakfast and later works in four or five houses and while she has the simple Anna-sambar while returning home in the afternoon.

Two employees have to perform all tasks

It is common to find minimum five employees in each Indira Canteen. One for giving tokens, one for serving food, one to clean the canteen premises and two for cleaning utensils. However, in Sharadadevinagar canteen there are only two employees who run the show.  When Star of Mysore visited the place, it was found that just the two were involved in all the jobs including giving tokens, serving food, cleaning the utensils and the premises. When asked for their reaction, they refused to talk.

But later when a person, who is a regular visitor, said that the employees were not being paid salaries regularly and hence a few of them had left and now no one else was coming to wash glasses and plates.

When SOM visited a few of the canteens to gauge the response, there were hardly any complaints. Some of the canteens were brimming with people both in the morning and afternoon where the canteens have played a big role in satiating the hunger of daily wagers and patients.

Nagaraju, a cook said that he comes from K.R. Pet taluk and cooks in Choultries. He could eat the food at Choultries itself but when it is not available then he comes to Indira Canteen. If one has to eat at fast food joint, then one has to shell out a minimum of Rs. 60 to eat out twice. However, at Indira Canteen just Rs. 10 is enough, he said.

The canteen on Jodi Thenginamara Road is facing problem as electricity to the canteen has been cut because of non-payment of bills. As a result in the evening, employees have to work under candle light and even people have to eat in the dark.

The demand here when compared to other canteens is not much and one of the reasons is because there are a few hotels that have sprung in nearby areas serving cheap food. Hence, only 150 to 200 people have breakfast and lunch and during dinner it trickles down to just 100 to 120.

The RO water filters in the canteen near Beedi Workers Hospital go out of order quite often which is causing problems to both the staff and the people. Some of the employees on condition of anonymity said that their salaries are not being paid on time.

Kitchens upgraded: The two kitchens at Kumbarakoppal and Alanahalli which supply food to all the 11 canteens have upgraded their facilities and that is one of the reasons why there are very few complaints from people.

However, one of the disgruntled voices is of Naseeruddin Pasha who eats at the canteen near Beedi Workers Hospital regularly. He says that three idlies served is hardly sufficient. B. Srikanth, who is from Beedi Colony, says that he has been eating in the canteen every day and so far he has not had any health issues. However, in spite of the good response, the demand for opening more Indira Canteens in the city has not come up.

Even for those earning Rs. 7,000 a month, spending Rs. 30 for a meal every day adds up to a lot of money. The meals served at the Indira Canteens are priced at Rs. 5 and Rs. 10 and they have really made a difference. I come for masonry work to Mysuru and have lunch here. They serve rice, sambar and curd rice. Sometimes I take two helpings and I am satisfied with the service here. This facility is a boon for poor people like us.

I have eaten in Indira Canteen several times. They serve quality food. For Rs.10, more than the required quantity is served. Nowhere else can we get breakfast and lunch at such low prices. They have also maintained cleanliness in canteens.”

I have come to Indira Canteen several times with my friends. This has been beneficial for school and college students. Daily wagers and students coming from rural areas eat here without any inhibition. They are serving rice, sambar and curd rice and both quality and quantity maintained.”

Many times Khichdi is served. Rice and sambar served in the afternoon is very tasty. I keep frequenting with my friends. All class of people including labourers and autorickshaw drivers come here to have breakfast and lunch. This facility must continue at any cost.”

I come here only in the morning and afternoon. The quantity that is served for the Rs.10 we pay is enough. It is greed to demand more. The canteen set up for the poor is definitely proving useful.”

Many times when our children go to school, we have got them breakfast at Indira Canteen. Idli, upma, rice bath are all very tasty. We also fill lunch boxes with the same breakfast and send them to school. Even though this is meant for the poor, all class of people are making use of this facility.

We are feeding our children breakfast and lunch without any problem. On holidays if there is a delay in preparing breakfast, we come here and take the parcel home. Even though we might not get the breakfast of our choice we still pack it and come home. Till now we have no complaints. At times it might be bland but not a problem.”