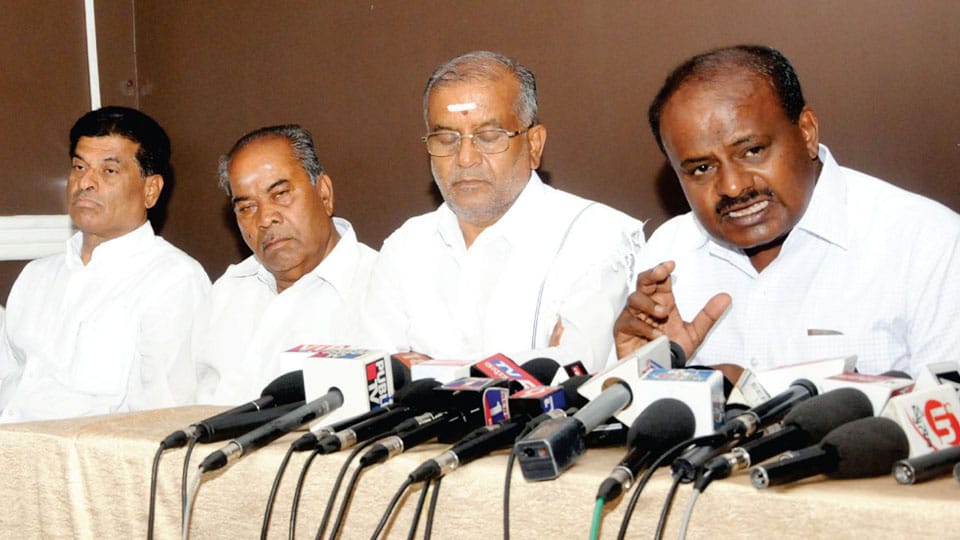 Mysuru:  Accusing Chief Minister Siddharamaiah of resorting to caste politics by ticking some Vokkaliga leaders to hold a press meet supporting him (CM) yesterday, State JD(S) President and former CM H.D. Kumaraswamy said that the CM’s caste politics will not at all work in Chamundeshwari constituency from  where he (CM) is contesting.

Addressing a press meet at a private hotel here this morning, Kumaraswamy alleged that the CM was buying Vokkaliga leaders to ensure their support in the coming Assembly polls.

Claiming that the CM’s five-day campaign tour of Chamundeshwari Constituency was a futile exercise, as the CM personally came to know of his weak situation, Kumaraswamy asserted that the father-son duo (Siddu and Dr. Yathindra) will certainly lose in Chamundeshwari and Varuna respectively.

Maintaining that all the 224 Assembly segments were equally important for the JD(S), he said that the JD(S)-BSP alliance has sent shivers in the Congress.

He further said that he will undertake a three-day tour of Chamundeshwari Constituency from April 14 to 16.

Accusing Siddharamaiah of revengeful politics, HDK said the CM was making baseless charges against the JD(S) for fear of losing the polls.

Criticising the Election Commission for not acting on JD(S) complaints on blatant poll code violations, the former CM said that the party will submit a written complaint to the Chief Election Commissioner in this regard when he arrives in Bengaluru.

Former KMF Director K. Umashankar, who was with the Congress, joined the JD(S) on the occasion.