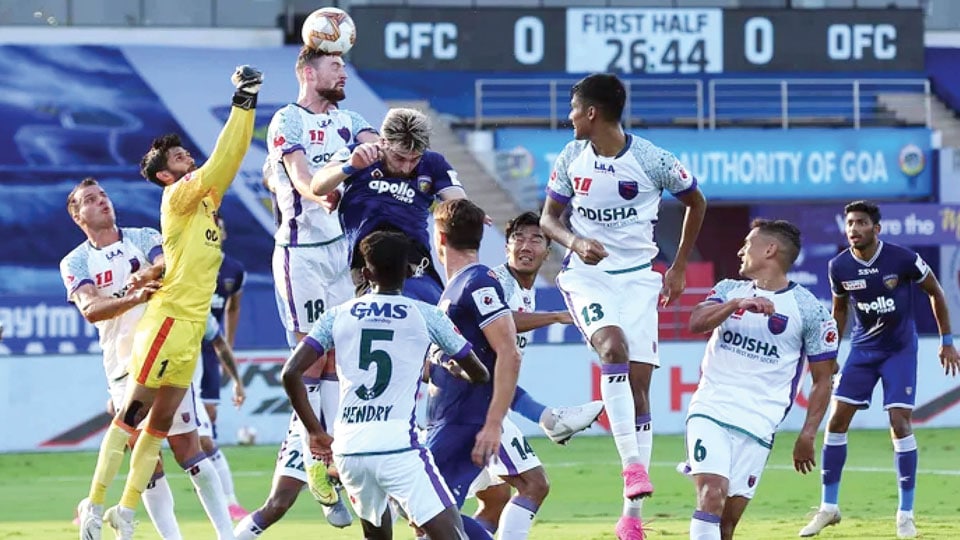 Odisha players defend hard to keep the score 0-0 during a Hero ISL match at Bambolim yesterday.

Chennaiyin FC’s winless run in Hero Indian Super League (Hero ISL) 2020-21 was extended to four games after a 0-0 draw against Odisha FC at GMC Stadium in Bambolim yesterday. It was a match of few chances and neither team managed to make the most of their limited opportunities.

In another match of the day yesterday, Kerala Blasters FC picked up a much-needed win as they beat Jamshedpur FC 3-2 at Tilak Maidan Stadium in Vasco.

Costa Nhamoinesu put Kerala ahead in the first half but Nerijus Valskis equalised before the break. The second half witnessed Kerala demonstrate tremendous character after going down to 10 men following Lalruatthara’s send-off.

Instead of feeling hard done by, the Blasters showed their resilience with two Jordan Murray goals. Valskis pulled one back for Jamshedpur but it wasn’t enough to deny Kerala the win.