Home » Columns » Abracadabra By K. B. Ganapathy » Hero is Home. What Next ? 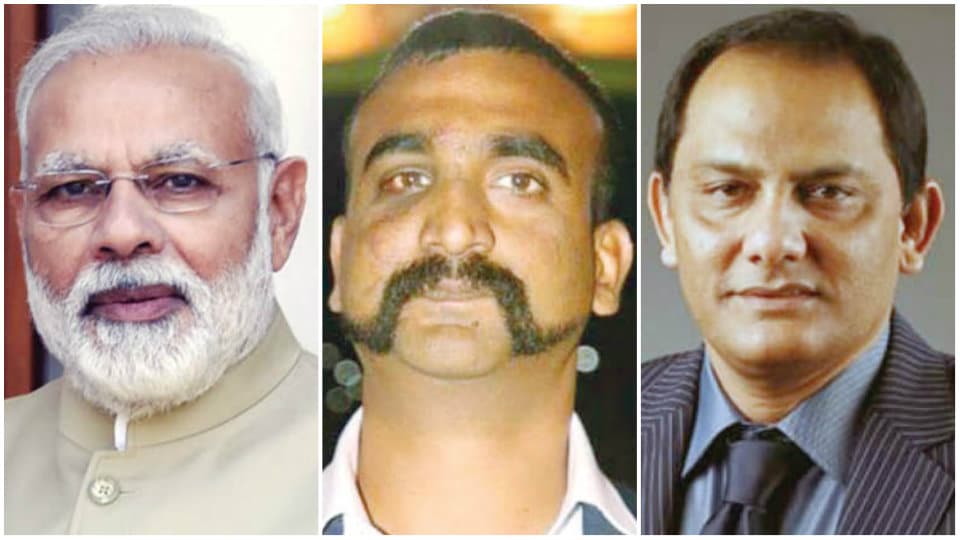 Hero is Home. What Next ?

He who lives by the sword shall perish by the sword, says the Bible. It means one who uses violence can expect a violent response. This is what has happened to Pakistan today.

Muslims of British (undivided) India could have lived in their ancestral hearth and homes without seeking a ‘for Muslims only’ country Pakistan which has now become, in its 70 years of existence, a sham Democracy with Islamic fundamentalism as its political credo giving hell to the minorities of what remains.

Pakistan was ruled for most of its existence by Dictators unlike India which exists as a Secular Democracy for all these 70 years with 14% Muslim population (2011 census) spread all over India with many Muslims holding high political and bureaucratic positions in the Government unlike in Pakistan which is an Islamic State.

Well, Pakistan’s existence could not have been different because of two reasons. One: The ‘inexorable Hindu-Muslim difference’ which exists in Pakistan and since a couple of decades in India too manifesting in many visible forms which were not there when I was a student. And India’s liberal Democracy with blind political vote-bank rivalry is further exacerbating the Hindu-Muslim relations in India.

Two: The Jammu & Kashmir Question. If it was the Muslim Question before independence that divided India as an answer, it is J&K Question which is troubling India with Pakistan-supported terrorist attacks.

There were many minor and major terrorist attacks across LoC, inside Kashmir and in different parts of India. The major ones that killed many innocent people and drew the world attention are: a) Parliament in December 2001, b) 26/11 Mumbai in 2008, c) Pathankot army establishment in 2016, d) Uri army establishment in 2016 and e) the latest one was the Pulwama attack on CRPFs on Feb. 14, 2019, for which Pakistan has paid a heavy price when Indian Air Force executed a non-military pre-emptive strike crossing the LoC and International Border and destroying the terror factories of Pakistan.

The ‘home coming’ of our hero of this attack on Pakistan, Wing Commander Abhinandan Varthaman, who had ejected from his stricken fighter jet Bison-1 after destroying Pakistan’s F-16, late last evening through Wagah-Attari border should augur well for a possible settlement of J&K Question. For this Pakistan should abide by the Simla Agreement and as a first step STOP terrorists from attacking India. If it does not happen, India should exercise its options for a final solution that any sovereign country would and should exercise — war. But before exercising this option, India should begin by scrapping Articles 370 and 35A to totally integrate J&K with India like all other States. Let the future Government, after the coming Parliament election, decide the future of PoK, but for now the big question is: What Next?

Even as Wing Commander Abhinandan Varthaman was crossing the border to his motherland, the firing from Pakistan army at LoC was going on, so also terrorist attack. This means Pakistan terror factory is very much operational and our air-borne strike has had no desired effect except for the strongest retaliation so far and drawing the attention of the world to Pakistan’s designs against India using terrorists for waging a proxy-war to inflict a thousand cuts.

Unfortunately, India has always suffered from a crisis of leadership despite its God-given POWER — Geographical Area, Natural Resources, Population and a Natural Protective Boundary with a huge sea-coast and Himalayas in the North. Like the old and feeble Prime Minister of England, during the critical period of Hitler’s rise in Europe, Neville Chamberlain, with his discredited Policy of Appeasement towards Hitler, we had an effete and corrupt Government for long with a skewed-up foreign policy. Worse, between 2004 and 2014, a mute Prime Minister could only plead with his countrymen for ‘Patience’ and ‘Tolerance’ even when Mumbai was burning with the worst terrorist attack taking many lives.

So also when our Parliament itself was attacked. The NDA Government could not retaliate, may be because of the ‘compulsions’ of a coalition Government with, 13 parties. And Kargil War? We must, in retrospect, thank America. Otherwise, I am sure, Kargil too would have become a PoK. Today India is paying with men and material for the poor leadership of our successive Prime Ministers and their Advisors.

Thank God today, by chance, we have a LEADER, a Prime Minister who is not Neville Chamberlain but a Vladimir Putin, George H.W. Bush Sr. and Jr. and Abraham Lincoln, in Narendra Modi — with clear understanding of the enemy’s moves and the courage and determination to fight the enemy here and now.

Narendra Modi realised, probably after the efforts of himself and Nawaz Sharif to begin talks in 2015 was thwarted by Pak Army, that terror attacks and talks would not go together and decided to act — an eye for an eye. The retaliation to Pulwama terrorist attack is the example. Modi has realised that chasing a ‘dialogue’, like some of our ‘liberals’ or ‘leftists’ want, is like chasing a mirage. India, young India, is tired and sick of chasing this mirage.

India must remember that it was Pakistan that initiated war in 1947 even as it was taking birth as a country. According to Husain Haqqani, Pakistan Ambassador to the United States (2008-2011), the use of force by Pakistan eroded its moral argument about Kashmir belonging to Pakistan because of its Muslim majority. He says Pakistan has failed to get international support over the issue and has ended up supporting militants and terrorists since the late 1980s to force India’s hand.

Sadly, with successive weak leadership at Delhi, Pakistan treated the 1972 Simla Agreement like a dead letter and deluded itself that by inflicting a thousand cuts using militants and terrorists, it would get J&K that it was unable to get by waging wars.

By God’s grace India got a leader now so tall that he has dwarfed all other leaders of the ‘Mahagathbandhan’. Other leaders are left wondering why did they allow such a huge country like India to be humiliated, humbled and black-mailed by terrorists, even by stone-pelters! The new leader for a new young and resurgent India is Narendra Modi. His lung-power is now backed by his gun-power after Pulwama terror attack. This is the opportunity to settle J&K once and for all. Modi must seize the opportunity because I am not sure of tomorrow’s prospective leaders of delivering India of the curse of terrorism from Pakistan.

And I am hearing Barkha Dutt and her toadies on TV batting for India playing cricket with Pakistan in the ensuing ICC World Cup. I also heard Mohammad Azharuddin, former Indian Cricket Captain and MP, who spoke keeping his cool despite provocation from the TV Anchor to inveigle him into saying, “Yes, we must play.” But he was too mature to fall into the trap. And let me join this great cricketer and endorse his opinion.

When Pakistan’s cricket team beat India in the finals of the International Cricket Council (ICC) Champions Trophy in June 2017, Pakistan’s Army Chief Gen. Qamar Javed Bajwa announced a reward for the winning team members out of the military’s budget. The players were to go for the Umrah pilgrimage to Mecca at the Army’s expense. This ostensibly because defeating India at cricket was somehow a national security need for Pakistan!

Every Indian should remember that our country, with a defined geographical boundary, is more sacred than the religion and the game of cricket. As Dr. B.R. Ambedkar rightly said, “If India loses who wins?” Come on, answer this question and then go to play cricket with Pakistan or go to Hades.