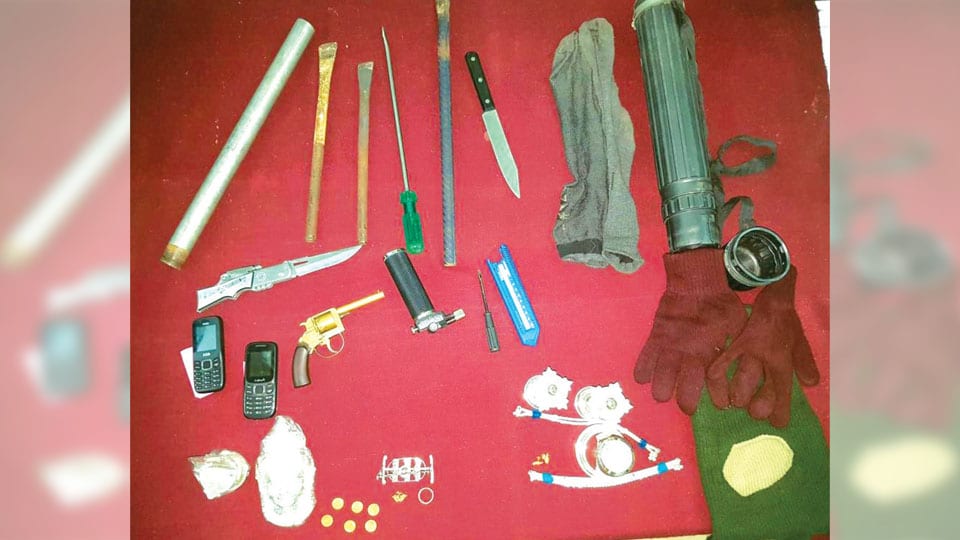 Mysuru: Saraswathipuram Police, following a house burglary case in their jurisdiction, have arrested one Ravichandra alias Ravi, 21, of Lakkur village in Gundlupet taluk, when the latter was standing near Muthoot Fincorp in Saraswathipuram on Mar. 14. During interrogation, the accused is said to have confessed of committing the crime along with others.

Based on the information provided by the accused, the Police arrested Manikanta of KHB Colony in Hebbal and during interrogation, Manikanta is said to have confessed of committing four house burglaries in Saraswathipuram Police limits. Following which Cops recovered gold ornaments weighing 16 grams and worth about Rs. 70,000, Silver articles weighing 270 grams, one Samsung Galaxy Tab and the car used for the crime.

Following information that another accused identified as Arun Raj alias Rajashekaran of Dindigul in Tamil Nadu has been arrested by the Aruppukottai Police (Tamil Nadu), Saraswathipuram Police, on Apr. 21 took him to custody and during interrogation, Arun Raj is said to have revealed that he had indeed committed house burglaries along with Ravichandra and Manikanta.

He has further revealed that when he came to Mysuru to commit house burglaries he stayed at a lodge in Gandhi Square along with his accomplices and used to keep the weapon and instruments used for the crimes in a container and had hidden it on the asbestos sheet roof of the toilet.

Based on the information provided by him, the Police seized the container hidden on the rooftop and on inspecting the contents, the Police came to know that he had hidden iron rods, glass cutter, screw driver, button knife and a revolver.

When the Cops questioned him about the revolver, Arun Raj is said to have told them that one Shiva of Vellore had given it to him and he was using it to scare people and has also confessed of committing crimes in Kodagu, Pudoru, Nagamalai, Dindigul and other places which involved betting, rice-pulling, black money to white money conversion and robberies. The Police also came to know that Arun Raj was serving a 11-month sentence in Madurai jail and was out on bail.

The Police have also launched a hunt to nab another accused who is absconding.

Saraswathipuram Police
Black and white money racket in city
Is State BJP heading for a split ?