Home » Feature Articles » How ‘dharma’ manifests in Vedas and Puranas 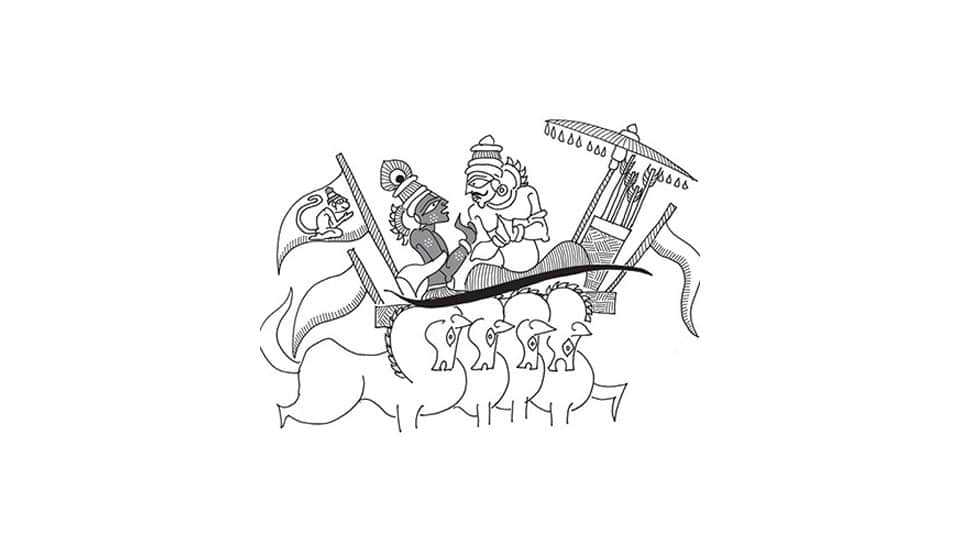 How ‘dharma’ manifests in Vedas and Puranas

The word ‘dharma’ first appears in the Rig Veda; but in a collection of a thousand hymns, the word dharma occurs less than a hundred times, making it not a very key concept. It is related to ‘foundation’ and ‘stability’ and ‘governance’. Even in the Upanishads, it is not a dominant theme.

The meaning is first explained rather clearly in Shatapatha Brahmana (800 BCE) when the absence of dharma results in matsya nyaya, or fish law, the Hindu version of jungle law, where mighty feed on the meek. This usually happens when we surmise from the verses when there is lack of rain and scarcity, and most importantly, when there is no king (raja) to restrain anarchy (arajakta).

This idea is further explained in the mythological story of Manu saving the ‘small fish from the big fish’ and later the ‘big fish’ saving Manu from the flood. Dharma thus clearly means when the mighty care for the meek. In a feudal system, it means the rich minority taking care of the poor majority. In a democracy it means, where the majority protect the minority. This story of the fish being rescued resurfaces 1,200 years later in the Vishnu Purana (400 CE): the small fish becomes the first avatar of Vishnu, narratively conveying the idea of dharma.

The idea of dharma manifests in the Puranas too. In Brahma Purana, we have the story of Brahma’s sons, Devas and Asuras who are constantly fighting. Swarga is the realm of Devas, full of wealth and pleasure, ruled by Indra. But there is no peace as it is constantly under siege by Asuras, who live in Patala (under the ground), and are convinced they have been tricked of their share of wealth. The battle of Devas and Asuras is unending. Indra is constantly replaced by more capable Indras, and Asuras are constantly reborn with more smart boons that Devas have to outsmart.

In Vaikuntha, the abode of Vishnu in Vishnu Purana, Vishnu is not hungry, but he seeks to satisfy the hunger of humanity by descending on earth in various forms (avatars) to teach humans dharma, first as a fish, and finally as an invader/revolutionary.

This brings us to Ramayana, which is essentially a part of Vishnu Purana, as it retells the story of Vishnu’s avatar Ram who lived in the Treta Yuga, so within the limits of time (kala). Here, we are told marriage is a way to establish dharma, ensure the rights of husband and wife. But neither Surpanakha nor Ravana respect marriage laws and wish to satisfy their hunger (desire being a more refined word) at any cost. They think of themselves and not others. The royal siblings misuse their power to abuse the powerless exiled prince and his wife.

Mahabharata, the other great epic, is also a part of Vishnu Purana, as it retells the story of Vishnu’s avatar Krishna who lived in the Dwapara Yuga, so within the limits of time (kala). Here the complexity of legal system is revealed. Who is the heir? Must the eldest be chosen over the youngest (Dhritarashtra over Pandu), the abled over the disabled (Shantanu over Devapi), the bloodline (Kauravas) or the adopted (Pandavas)? It comes down to does the mighty (hundred brothers with eleven armies) willing to co-exist with the meek (five brothers with seven armies) or will they not share ‘a needlepoint of land?’

The idea that a king overturns matsya nyaya to establish dharma and prevent arajakta is found in the royal inscription that established the Pala kings of Bengal in 750 CE. Incidentally, Pala kings patronised Buddhism indicating the concept of ‘king overturning jungle law’ was an Indian idea, not just a Hindu one. The consistency in meaning from Vedas through Puranas to the epics to Buddhist lore is remarkable.