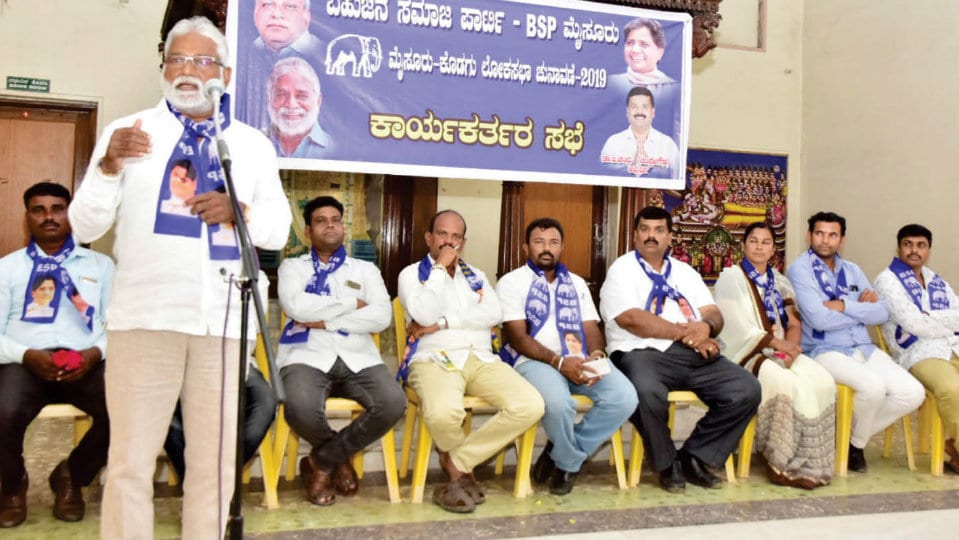 BSP Chief to address rally in city on Apr.10

He was speaking after inaugurating a preliminary party workers meeting to make arrangements for the mega BSP Rally to be held in city on Apr.10, at Anand Vihar Kalyan Mantap on Mysuru-Nilgiri Road here recently and said that just like last year’s Assembly elections in the State, the Lok Sabha elections will also have a fractured verdict with no party getting a majority on its own.

“This time in Uttar Pradesh, BSP and SP (Samajawadi Party) alliance is going to change the political fortunes of the country. In the 88 seats in the State, BSP-SP combine is confident of winning 55 to 60 seats. This coalition is going to have an effect on the results of nine neighbouring States. The BJP which has won 71 seats in the last elections is going to lose 60 seats out of it. Since there is going to be a hung verdict, Mayawati is going to be elected as the PM,” he said.

“BJP and Congress have ignored the exploited classes. They are making false promises of eradicating poverty and creating jobs thus misleading the youth. Hence, people should reject both the parties,” he urged.

“BJP had campaigned last time showcasing Congress’ 60 years misrule. Trusting that good days (Achhe Din) will come, people had voted for BJP. However, as Modi had claimed, the good days never arrived and even today the poverty has not been eradicated,” he regretted.

One lakh people to participate in rally: BSP Chief Mayawati will address the mega rally on Apr.10 at Maharaja’s College Grounds.