Home » News » Hunt for treasure comes to a naught 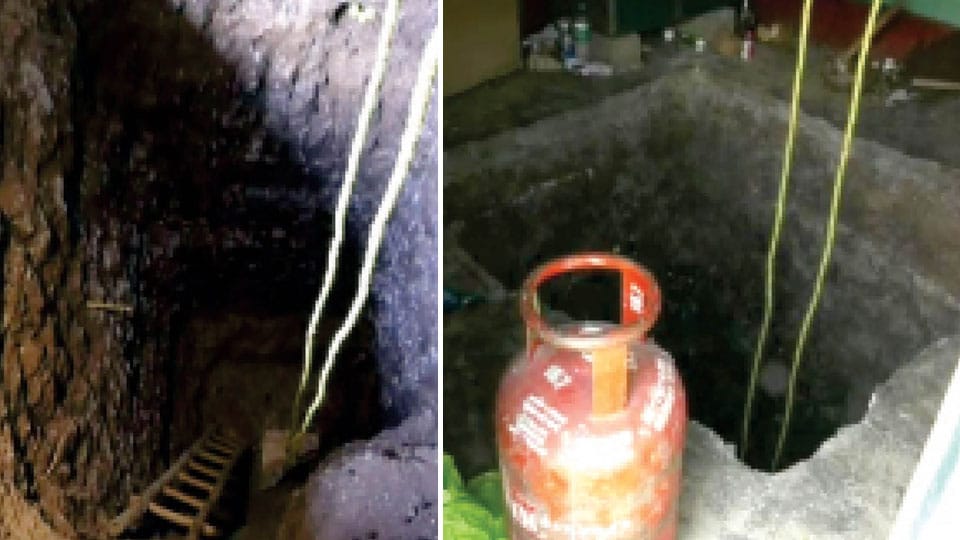 Hunt for treasure comes to a naught

Chamarajanagar: What would one do if a cobra is found inside your house? At the most call a snake rescuer and shift the reptile to forests. But would you ever dig the rooms of your house to find a treasure after being influenced by a tantric?

That’s exactly what a couple in Chamarajanagar did and now they have become a centre of attraction along with their dug-up house. The digging was so deep that it resembled a 20-ft well, without water.

Somanna, a resident of Ammanapura village in Chamarajanagar taluk, a daily wage worker, was shocked to find a cobra inside his house sometime back. He lived in his modest house with his wife and two children. The family killed the snake.

But two more cobras appeared after days and the family members informed their relatives who suggested they consult an astrologer as it could be due to some supernatural powers. The astrologer, in turn, introduced the couple to a Kerala-based tantric and he told the couple that a treasure lies beneath the house and the snakes were there to guard the wealth.

The tantric told the couple to mark the portion of the house where the snakes had appeared and begin digging. After the tantric performed pujas to the location, the couple began digging the house. As the pit became deeper, ladders and ropes were used to shift the mud from inside.

Out of fear, the couple believed the tantric and also were elated at the same time to learn about the treasure that would make their lives happy. The pit was dug without creating any suspicion among the villagers and the couple dumped the removed soil in another room of the house.

But even after digging about 20 feet, there was no sign of the treasure. Meanwhile, the mud that was collected from the pit became a mountain in the other room making it difficult for the family to live inside the house with earth smell permeating.

The constant digging and the associated ‘thud’ sounds, however, did not fail to attract the attention of the villagers who informed the Police two days back that something fishy was cooking inside the house. A Police team went to the house only to see a 20-ft deep pit.

Explaining the pit, Somanna told the Police that he had dug up the house on suspicion that there might be more snakes inside the house foundation. No complaint has been lodged and the Police conducted an inquiry and warned the couple. The tantric, who is behind the entire episode, has vanished without a trace, switching off his mobile phone.

Chamarajanagar East Police Inspector Anand said, “As soon as we came to know about this, we visited the spot. The house owner claimed that he had dug the room to check for any anthills below as snakes were being found frequently slithering into the house. He has been warned to close the pit and not to indulge in such acts in the future.”

The couple now have an arduous task of closing the pit and making the room liveable again.

Chamarajanagar treasure
Tree branch falls on road: Miraculous escape for food delivery employee
No decision yet on reopening of classes 1 to 5: Minister