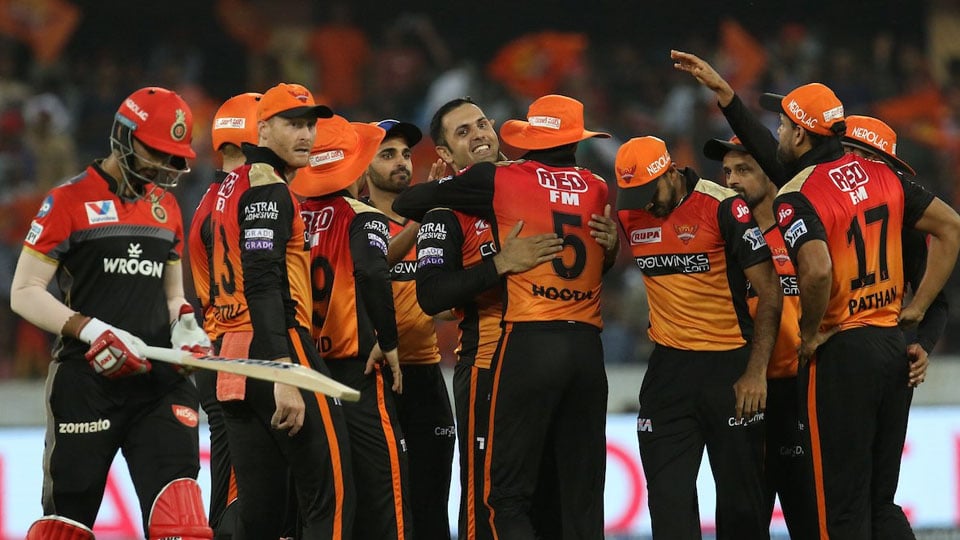 Hyderabad: David Warner and Jonny Bairstow added 185 runs for the opening wicket — highest in the history of the competition and enabled Sunrisers Hyderabad (SRH) to outplay Royal Challengers Bangalore (RCB) by 118 runs in Hyderabad yesterday.

While Bairstow smoked 114 in just 56 deliveries, Warner smashed an unbeaten 55-ball 100 to send the Bangalore bowling attack to all parts of the ground with ease.

Things got worse for the visiting side when Nabi, playing his first game of the season, dismissed Bangalore openers Parthiv Patel (11) and Shimron Hetmyer (9) in the space of two deliveries.

The offspinner then also got rid of de Villiers (1) and Shivam Dube to break Bangalore’s back.

However, it was Sandeep Sharma who got the big wicket of Kohli, having him caught at covers for 3. The right-arm medium pacer has now dismissed Kohli six times in IPL — joint most with Ashish Nehra.

Having been reduced to 35 for 6, Colin de Grandhomme and Prayas put on a 51-run partnership to save their team from some embarrassment.

De Grandhomme played a couple of good shots before being run out for 37. Apart from Nabi, Sandeep picked up two wickets, while there were also three run outs, rubbing salt in Bangalore’s wound.

J. Bairstow was adjudged as the Man of the Match.

Chasing 176 runs to win, RR were off to a poor start as they lost captain Ajinkya Rahane (0), Jos Buttler (6) and Sanju Samson (8) and were reduced                    to 14/3. Thereafter, Rahul Tripathi and Steve Smith stitched together a 61-run stand for the 4th wicket. But it was Imran Tahir, who dismissed Tripathi, who was batting on 39. His innings included 5 fours and a six. Smith also fell prey to Tahir as he was dismissed for 28.

With three wins out of three matches, CSK now go on top of the IPL points table.

Earlier, a late flourish by captain M.S. Dhoni propelled CSK to 175/5 in 20 overs. The CSK captain brought up his 21st IPL half-century.

M.S. Dhoni was adjudged as the Man of the Match.