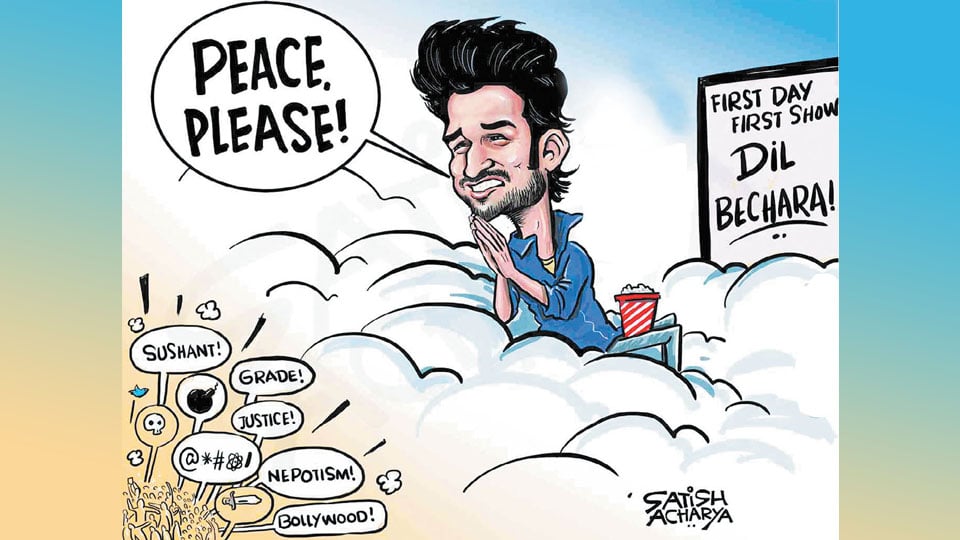 Sushant Singh Rajput died on June 14 and the entire nation was in shock. Then a month later, the mourning turned into outrage as many claimed it was murder.  Since then chaos has ensued with several parallel narratives in play, both in the mainstream media and social media.

As days go by, instead of it being about justice for Sushant and closure for his family, it is becoming a race for ratings among TV channels, scoring political points for political parties and ego clash between inter-State Police Departments.

It is indeed the media’s job to hold ‘authority to account’ and ‘speak truth to power’, but while doing it one has to be professional, not give space for “hearsay” and politicians who mislead the movement with unsubstantiated claims to “settle political scores.”

The very fact that the former CM of Maharashtra calls a press conference and says Sushant’s former Manager Disha Salian had injuries that indicate rape and that the present Maharashtra Chief Minister’s son, Aaditya Thackeray, was present there, is a serious charge. But he didn’t have Adithya’s location tracked to prove it. He had no statement from the CM’s son’s security personnel either. He had nothing. He just said it !

When you give space for such claims, then we lose our focus on justice and move into the realm of vengeance. Let the politicians not hijack Sushant’s death for their political machinations. That would be injustice.

Worse is TV anchors turning into psychologists on TV! Sushant may not have been depressed, but a TV anchor does not have the right to diagnose that on live TV. One TV anchor played a happy clip of Sushant and declared,“Does not look depressed.” Wah!

So by that logic if you watch a clip of Deepika Padukone, an actor who has been fighting depression and is vocal about it, on her social media where she is always cheerful, can we declare she’s not suffering from depression and that she has been lying all along?

Mental health issues are complicated and TV anchors should not trivialise them to nullify the “depressed” angle in order to give credence to their “Sushant was murdered” angle.

What is also most disturbing is the way Police Departments of two States treated each other. It showed a complete lack of trust and even disdain! But one has to ask: Can two Police forces investigate the same case? The answer is NO.

A case can be formally transferred to another agency like the CBI, but two agencies cannot probe the same FIR simultaneously. So the Bihar Police was duty-bound to register a “zero FIR” and transfer the case to the Police Station under whose jurisdiction the crime has taken place, which in Sushant’s case was Mumbai. Instead, Bihar Police simply landed up in Mumbai to investigate! And the Mumbai Police did what any Government body would do when their jurisdiction is trampled upon — put up sneaky hurdles like quarantine!

But why this obsessive hurry to investigate from the Bihar Government? Is it to create publicity and confusion so that the case is forced to be handed over to the CBI?

Indeed the reluctance of the Maharashtra Government to hand over the case to CBI gives credence to the “cover-up” theory. But one must also think, may be the Maharashtra Government is not so much worried about “how Sushant died” as much as “what if” — what if CBI names the CM’s son, Aaditya Thackeray in the investigation, which then raises the call for CM’s resignation, which then could lead to a by-election? Well, this is also a theory floating around.

Sushant’s case reminds many of us in Karnataka about the death of IAS Officer D.K. Ravi.  The officer’s death was blown so out of proportion that even when it turned out that it was indeed ‘suicide,’ people refused to believe it. Because the mainstream media and social media implied murder and murder is what people wanted it to be.

Back then a National English news channel even created a twitter handle: #WhoKilledIAS! So it assumed Ravi was ‘killed’ and implied there was or were killers involved whom we had to catch! And only CBI could do it, not the Karnataka Police.

Then the “hero-fication” of D.K. Ravi began. The media put out over-exaggerated heroic stories of Ravi. Grammy winner and resident of Bengaluru, Ricky Kej even composed a song in his honour. They said Ravi was transferred 24 times in his brief career when in fact it was just 4 times. Soon people were on the streets, convinced that it was murder of an honest officer.

Then the “murder” angle got boring as the media sniffed a “love” angle. Information started coming out that Ravi was stuck in a one-way love affair. It didn’t even matter that the court had a ‘gag’ order yet his conversations were leaked anyway.

But the news organisations say they are giving what the people want. The truth. But this is just partial-truth. What people want is a little journalism with a good dose of sensationalism. They want even TV news to be as exciting and dramatic as Netflix shows.

The TV anchors, in a race to create drama and hence viewership, are creating an ‘argumentative culture’ where dialogue and refrain are seen as being cowardly and unconcerned, while shouting, belittling and aggressive-arguing are seen as signs of sincerity, concern and integrity.

In the case of D.K. Ravi, who would have been otherwise remembered fondly as a people’s officer, ended up being remembered as a love-struck babu who wanted to be a real estate developer. All thanks to the hype!

Let’s hope in Sushant’s case we will remember him as a rare gem in Bollywood, an intellectual man dedicated to his art and in love with Science, instead of a manipulated small town boy from Bihar. And if it turns out to be murder, then let’s hope CBI will do its job — deliver justice to Sushant instead of political fodder for its master.