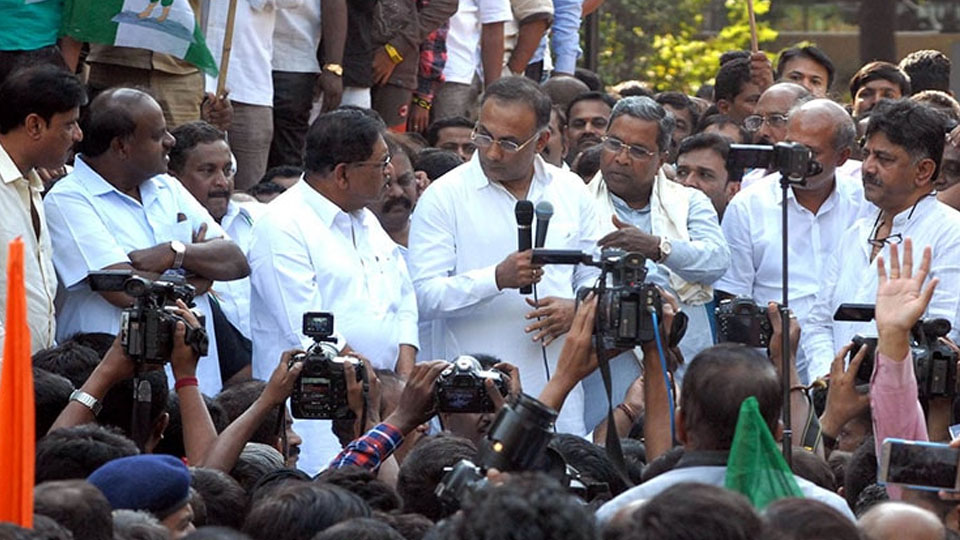 Bengaluru: Taking serious note of the demonstration held by Chief Minister H.D. Kumaraswamy, Cabinet Ministers and former CM and CLP leader Siddharamaiah and other Congress leaders in protest against I-T raids on Congress and JD(S) leaders recently, Income Tax officials have lodged a complaint with the Election Commission seeking action against them.

Balakrishna has also accused the CM of announcing that he (CM) had prior information on I-T raids, which was a violation of Oath of Office. Also, the CM had aided the Tax evaders by making such an announcement, the complaint said.

Following a tip off that huge transactions were going on in the Treasury in the run up to the Polls, the I-T sleuths had raided the premises of Contractors and Engineers at Hassan, Mysuru and Mandya districts last month and had seized unaccounted cash of Rs.2.11 crore and gold jewellery worth Rs.1.69 core.

Accusing the Congress and JD(S) leaders of threatening the I-T Department through such a demonstration, the I-T has appealed the Election Commission to direct the Police for initiating legal action against all those who took part in the demonstration, which the Department alleged was a direct threat to I-T sleuths.