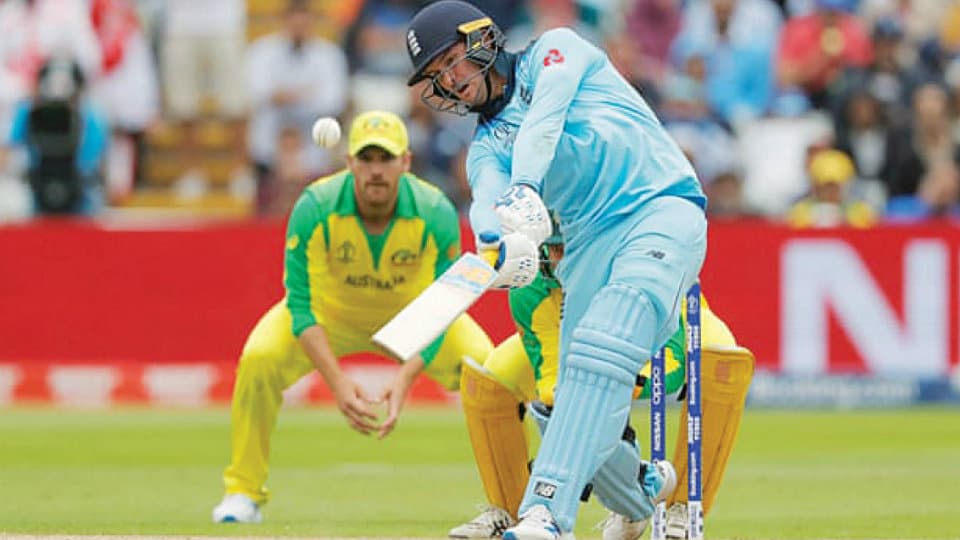 A brilliant effort by England opener Jason Roy (85) and an inspiring spell of fast bowling by Chris Woakes (three for 20), enabled the hosts to post a crucial win against defending champion Australia by eight wickets in the semi-final of ICC World Cup-2019 at Edgbaston yesterday and ensured them of a place in the final on Sunday.

Winning the toss and electing to bat, Australia lost both their prolific run-getters and openers David Warner (9) and skipper Aaron Finch (0) early to Chris Woakes and Jofra Archer respectively (two for 10 in 2.4 overs). England stuck telling blows and reduced Australia to (three for 14 in 6.1 overs) with Handscomb (4) departing clean bowled by Chris Woakes.

Australia were in a difficult situation and Steve Smith (85,119b,6×4) stood tall along with Alex Carey 46 (70b, 4×4) and added a vital 103-runs for the fourth wicket and revived the hopes of an Australian fight-back. Leg-spinner Adil Rashid had other plans and struck two telling blows and removed the dangerous Carey and Stoinis (0) and Australia were in the dumps at five for 118 in 27.6 overs.

Glenn Maxwell (22, 23b, 2×4, 1×6) and Smith tried to push the score along, but Maxwell was dismissed by Archer by spooning a catch to skipper Morgan at cover (six for 157 in 34.5 overs). The lower order with the exception of Mitchell Starc (29,30b,1×4,1×6) fell to the guiles of bowlers and were out for 223 in 49 overs. It was an overall disciplined bowling performance by England and the Australian batsmen disappointed with a mediocre total. Woakes (three for 20) was impressive with the new ball and was well supported by Archer (two for 32) and leg-spinner Adil Rashid (three for 54).

Starc (one for 70) was below par and bowled well within himself this game, while Pat Cummins (one for 34) was less productive. Australia scored 226 for two in 32.1 overs and won by a convincing eight wickets.

England outplayed Australia in all departments of the game and scored their first win against them in World Cup matches since 1992. England will take on New Zealand in the Final at Lords on July 14 (Sunday) at 3 pm and that day will have a new World Champion.