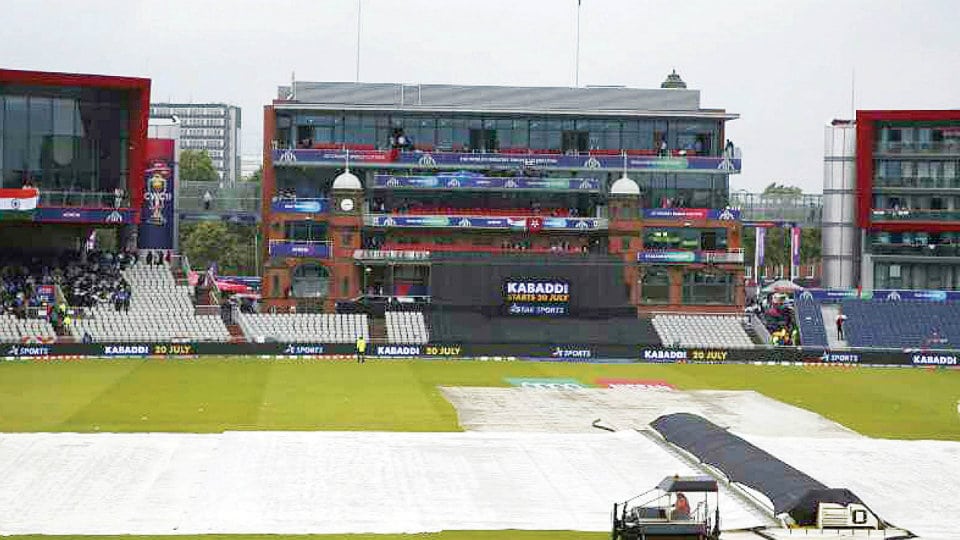 India’s World Cup 2019 semi-final match against New Zealand was suspended for the day after rain stopped the proceedings on Tuesday at Old Trafford in Manchester. The semi-final match will resume on Wednesday at 3 pm IST.

After winning the toss and electing to bat, New Zealand got off to a poor start as they managed to score just 27 runs and lost the wicket (Martin Guptill) in the first ten overs. Jasprit Bumrah and Bhuvneshwar Kumar were exceptional with the ball and the spinners also did the damage in the middle-overs.

New Zealand were 211 for 5 off 46.1 overs when persistent rain worsened sufficiently for the umpires to halt play at 2 pm (6.30 pm IST) with 23 balls left in the innings.

But after more than four hours off the field, the umpires eventually decided there was no prospect of even a 20 overs per side match, the minimum required under the Duckworth-Lewis (D/L) method for rain-affected matches, being completed on Tuesday and they abandoned play for the day at 6.20 pm (10.50 pm IST).

The match, which remains a 50 overs per side contest, will now resume at 10.30 am (3 pm IST), weather permitting, with New Zealand on what will be their overnight score of 211 for 5, with Ross Taylor 67 not out and Tom Latham unbeaten on three.

New Zealand captain Kane Williamson had earlier made 67 after winning the toss, with Jasprit Bumrah (1/25 off eight overs) leading a disciplined India bowling attack. If a 20 overs per side match cannot be completed on Wednesday as well, India would go through to Sunday’s final at Lord’s on the basis of having finished first to New Zealand’s fourth in the 10-team league stage.

No reserve days were scheduled for the league stage matches of this World Cup, which has already featured a record four washouts. [A Reserve Day is an extra day allocated to a match by the ICC in order to maximise the chances of having a result for it. For the World Cup, only semifinals and the final have a Reserve Day]

Tournament hosts England and reigning champions Australia will contest the second semi-final at Edgbaston on Thursday, with that match able to continue on to Friday if a reserve day is required.