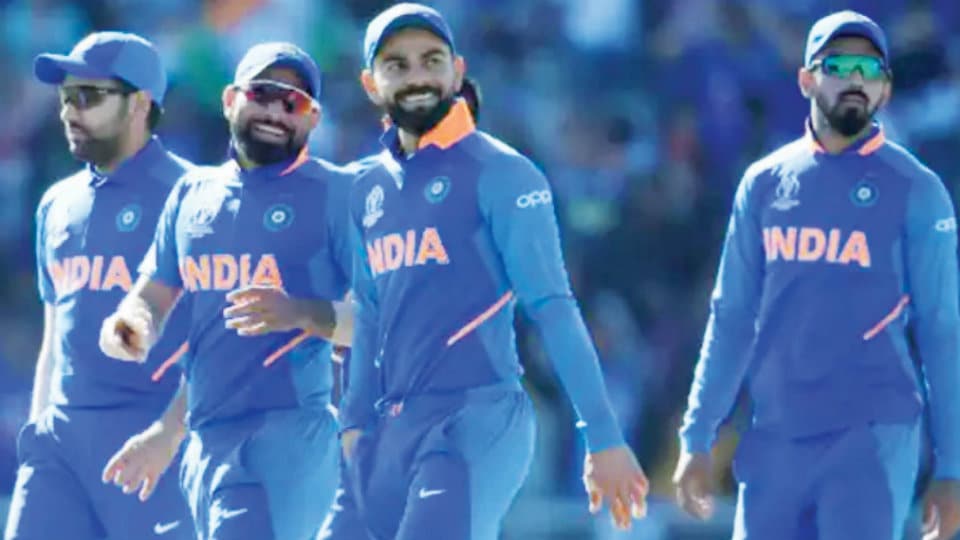 West Indies, the former champion, have been eliminated from the men’s cricket World Cup 2019, after losing to India by 125-runs at Old Trafford, Manchester on Thursday.  Excellent batting performance by skipper Virat Kohli and inspired bowling by Mohammed Shami, Jasprit Bumrah and Chahal enabled India to win by a big margin. This is India’s biggest win against West Indies in a World Cup. India remain unbeaten and is the only team to have an unbeaten record in this edition of the World Cup so far.

Winning the toss and electing to bat, India got off to a decent start with openers K.L. Rahul 48 (64b, 6×4) and Rohit Sharma 18(23b, 1×4, 1×6) added 29-runs for the first wicket. Rohit Sharma departed to a debatable DRS decision and India had to depend on skipper Virat Kohli to shore up the Indian innings. Rahul had departed for a well made 48. India also lost Vijay Shankar (14) and Kedar Jadhav (7) quickly and were reduced to 140 for four in 28.5 overs.

West Indies batsmen floundered in their pursuit of 269, and early scalps from the rampant Indian seamers left Holder’s team with a steep uphill climb. Mohammed Shami followed up his magnificent hat-trick against Afghanistan with another vital contribution, dismissing Chris Gayle (6) in the fifth over before following up with the wicket of Shai Hope (5) in the seventh. West Indies were reduced to 16 for two and were struggling against the inspired Indian bowling attack. A 55-run third wicket partnership between Sunil Ambris (31, 40b, 4×2) and Pooran (28) rekindled West Indies hopes but  Indian bowlers struck in tandem and reduced West Indies to 101 for 7 in 26.2 overs from which they could not recover. Shimron Hetmyer (18), Jason Holder (6) and Carlos Brathwaite (1) departed early and West Indies middle order succumbed to the guile’s of Indian bowlers.

Jasprit Bumrah took two wickets in as many balls to see the end of Carlos Brathwaite and Fabian Allen, and the tail was cleaned up with relative ease as India secured the win by 125 runs. Mohammed Shami was India’s most successful bowler taking four for 16. Jasprit Bumrah (two for 9) and Yuzvendra Chahal (two for 39) were the other wicket-takers. West Indies were bowled out for 143 in 34.2 overs.

Virat Kohli was chosen as the Player of the Match. Australia heads the points table (12 points), followed by India (11), New Zealand (11) and England (8). West Indies are in the seventh (3 points from seven games) and are eliminated from this edition of the World Cup.