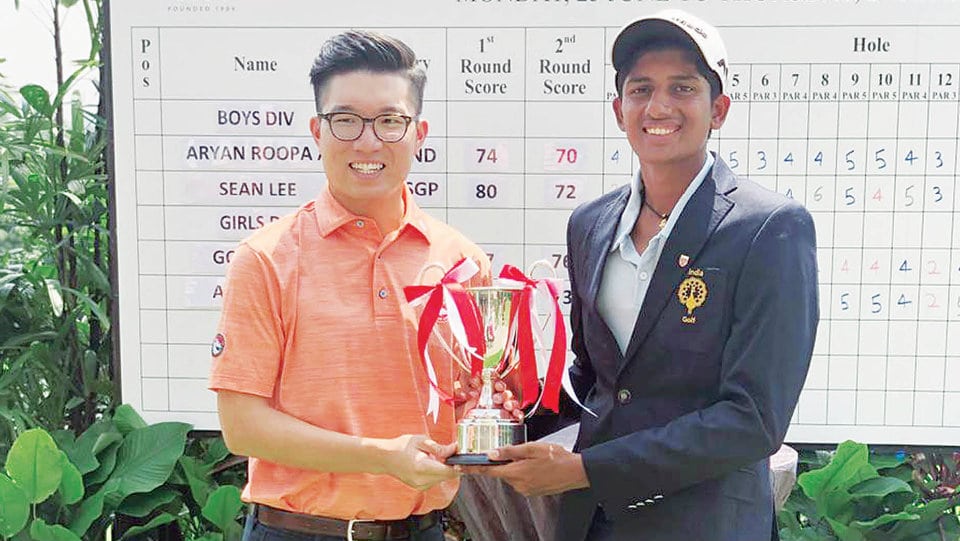 Aryan Roopa Anand from Mysuru, one of the promising young golfers in the country, has emerged as overall boys champion and won gold medal in the three-day Singapore Junior Golf Championship.

The championship concluded yesterday at the island’s Keppel Club course. The 17-year-old Aryan was ahead of Singapore’s Sean Lee and Poon Jia Hao of Malaysia. Aryan’s three-day total of 222 (74, 70, 78) was two shots better than the local challenger and seven ahead of Malaysia’s Poon.

Aryan emerged as overall champion, second day gross winner and team winner. In all, 30 players tried their luck in Aryan’s category. Aryan had a total of eight birdies in his three rounds. On the second day his card of 70 also fetched the day’s best gross award in boy’s 15-17 category.

On the final day, Aryan had a blemish-free round with 14 pars in a row but a late stumble with two bogeys and two doubles dented his card somewhat. In the final analysis, it was still good enough for him to land the gold medal ahead of Sean Lee, who was two shots behind.

The Indian Golf Union-fielded team had further success as Aryan and Arjun Bhati teamed up to win the boy’s team event as India B, totalling 307 were finally well ahead of the Malaysian Golf Association (Marcus Lim/Nor Harith Nor Hadi, 311) and the National Golf Association of the Philippines (Masachi Otake/John Edward Dy, 312) teams.

Born on Dec.21, 2001, Aryan started playing golf at the age of 8 and is currently trained under Tarun Sardesai at the Tarun Sardesai Golf Academy in Kolar.

Reacting on Aryan’s achievement on Instagram, coach Tarun Sardesai said, “The team has worked hard with Aryan over the past few years when the top spot has eluded him many times on the National Junior Circuit. Great for his first win to be an international one.”

Aryan is the son of Roopa and Anand, residents of Dattagalli.