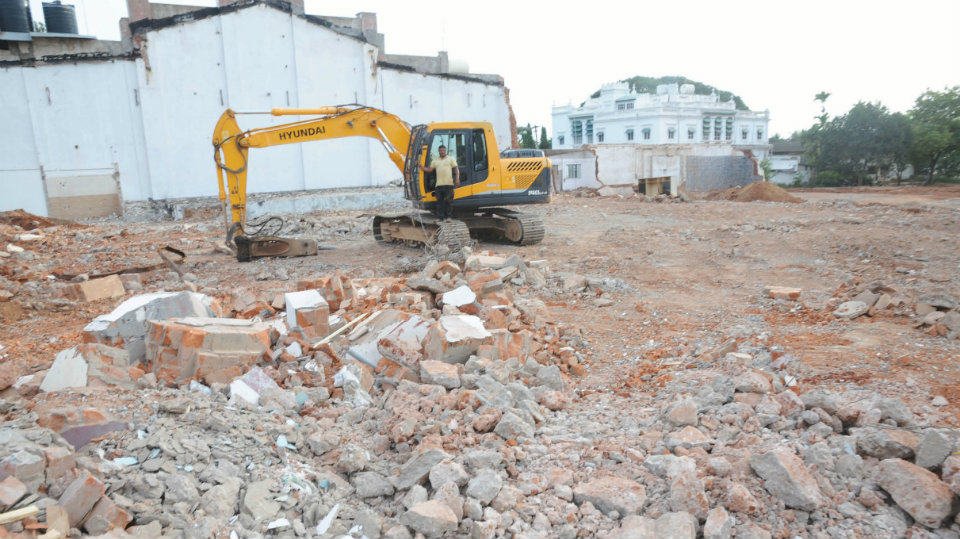 Mysuru: Premier Studio, on Hunsur Road, one of the important landmarks in the heritage city, has stopped calling lights, sound, camera and action.

Just as these famous lines at the start of the rolling of cameras in all the famous studios, have faded into history, the Premier Studio has also been razed to the ground. For various reasons, the studio had stopped functioning since the last 20 years and it was being systematically brought down and the remnants of the remaining portion of the buildings came down finally yesterday.

The flamboyant owner M.N. Basavarajaiah started the Premier Studio in 1954 which went on to be called the ‘King of Studios.’ In the beginning there were just three or four films shot in a year. However, in the 1960s and 1970s, with the initiative taken by Basavarajaiah, subsidy was introduced for Kannada films and as a result the number of shootings in the studios shot up.

“There were seven floors of 10,000 to 12,000 sq.ft each. Each floor was named from A to F. The last floor was not named G as seven was considered unlucky and hence two floors were named B1 and B2,” said M.B. Nagakumar, one of the sons of Basavarajaiah

Asked whether at any time all the seven floors were occupied, he said that during peak of the shooting season years, about four to five floors would be occupied. “The reason my father built seven floors on nearly four acres of land was to have sets with replicas of jail, club, hospital, wealthy man’s house and so on. The idea was to bring the cost for the producers down,” he said.

According to Nagakumar, the choice to raze the iconic Premier Studio was very difficult. But they had little options. “Even the famous Universal Studios in Hollywood has changed hands many times as running a venture of this magnitude is not easy. We had no options but to close it down as the producers started shooting outdoors from 1980s itself. As a result, our floors had no work,” he said. The iconic Premier Studio on Hunsur road razed to the ground yesterday.

R.K. Studios in Mumbai started by the legendary actor Raj Kapoor in 1948 is also facing a similar fate as their family members have decided to sell the property since they cannot maintain it.

The Kanteerava Studios in Bengaluru is surviving only because of the television serials, but hardly any movies are shot there, said Nagakumar.

Some of the well-known names in the Kannada and Indian cinema of the likes of Shankar Singh, B.R. Panthalu, Y.R. Swamy, R. Nagendra Rao, Puttanna Kanagal, Mani Ratnam, Balachander have shot their films here.

Some of the famous movies shot here are ‘Vamsha Vriksha’ based on S.L. Bhyrappa’s novel of the same name. Shahrukh Khan’s ‘Deewana’ was also a popular Hindi film shot here.

More than 800 films have been shot here and one of the last movies to be shot was as late as in 2017.

The one blot on this iconic studio has however been the fire tragedy when Bollywood actor Sanjay Khan was shooting the TV serial ‘The Sword of Tipu Sultan’ in 1989. Many floors turned to ashes and nearly 52 artists and technicians lost their lives. Even Sanjay Khan suffered serious burn injuries.

Owner Basavarajaiah suffered huge losses and this was the beginning of the end of the shooting culture in the indoor studios.