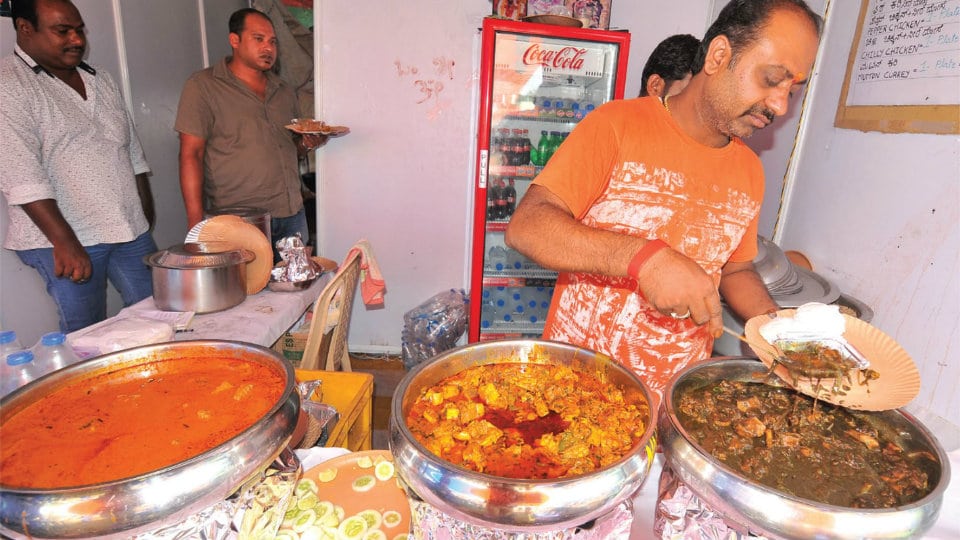 Mysuru:  The Dasara Aahara Mela or the Food Mela Sub-Committee has made all preparations to ensure a finger-licking-good treat to visitors besides maintaining cleanliness.

Speaking to Star of Mysore, Deputy Director of Food and Civil Supplies Department P. Shivanna said that the Food Mela will be held from Oct.10 to 19 at two different venues — Scouts and Guides Grounds and MUDA Grounds near Lalitha Mahal Palace. The Committee has planned to give permission to set up 130 stalls this year. Each venue will  have 65 stalls.

He said that the highlight of this year Mela would be Tribal Food or food from the woods produced from various tribal hamlets across the State. The department has already held discussion with various tribal organisations in this regard. ‘Bamboo Biriyani’ and ‘Bamboo Rice Kheer’ prepared by tribals were in great demand last year. As many as five lakh visitors tasted the food last year and the number of visitors visiting the Aahara Mela may cross that number this year.

Tribals from different hamlets served delicious food items to visitors at their specially constructed   ‘Aadivasi Mane’. Bamboo Biriyani – rice, masala and chicken – stuffed and cooked with bamboo stems, and tea made of ‘makali beru’ were a great hit last year. The same items will continue this year too, he added.

Shivanna also said that the department has also taken steps to arrange Tibetan, Italian, Chinese, French dishes, which will be other major highlight of this year fest. Talks were also held with some reputed cooks working at various Star Hotels in Mumbai, Bengaluru and other cities to prepare and serve Italian, other foreign dishes.

This will attract foreigners too to the Food Mela. Some of the cooks agreed to set up their stalls, he said and added that permission will be given to Tibetans to take part in ‘Aahara Mela’.

It has also been decided to conduct cultural programmes every evening from 6.00 pm till 10.00 pm where Gangavati Pranesh and other comedians will take part. As many as 60 artistes are also participating.

The Department has also decided to conduct food preparation and eating contest for both men and women.

The Department has also taken measures to maintain cleanliness and other safety measures besides for effective disposal of garbage. Steps have been taken to make necessary seating arrangements for the aged, children, and women to sit and eat. Safe drinking water facility will be provided.

The Department of Food and Civil Supplies has invited applications from cooks, women, hotel and organic food supply firms, foreign students and other organisations who are involved in preparation of variety food items (vegetarian and non-vegetarian) to take part in Dasara Aahara Mela and demonstrate food preparation.

Permission will be given to set up stalls in the mela for select cooks and preference will be given to dishes prepared with millets and organic food item. Interested can apply with details to the Office of Food and Supplies Department before Sept. 30. Experts in cooking Punjabi, Rajasthani, and North Eastern style, Marathi, Tibetan, Chinese, Italian and French can also apply.