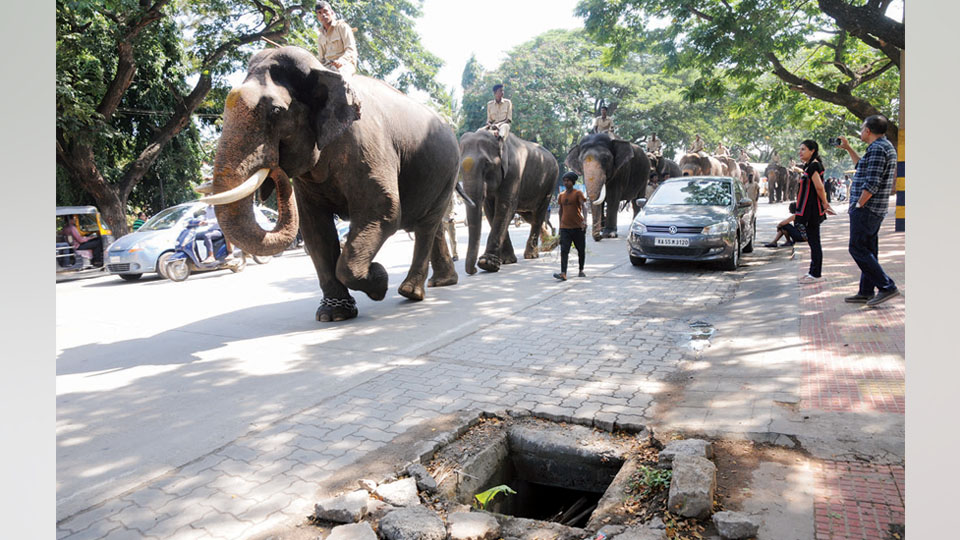 Mysuru: Danger seems to be lurking for pedestrians around the Core Heritage Zone in city, particularly around the Mysore Palace, K.R. Circle, Sayyaji Rao Road and the Jumboo Savari Route from Mysore Palace to Bannimantap as concrete slabs and footpath tiles that were used to cover the roadside drains have been found either broken or damaged. One wrong move might land pedestrians inside the drain, breaking their limbs.

The area is frequented by a large number of tourists and shoppers and in order to beautify the same, the ambitious Raja Marga project (worth over Rs. 18 crore) was taken up in 2010 under the Rs. 100-crore special grant sanctioned by the State Government to give a royal touch to Jumboo Savari route.

But ever since the project works began, the smooth movement of pedestrians has been disrupted, thanks to poor workmanship and substandard materials used for the project. Adding to the woes of pedestrians, shopkeepers complain of awful stink emanating from the drains.

While the incident of a tourist from Kerala, who was seriously injured after she fell into an uncovered drain on Sayyaji Rao Road in 2015, was highlighted by the media forcing the Mysuru City Corporation (MCC) to pay compensation to her, many such incidents have gone unreported as pedestrians chose not to complain. 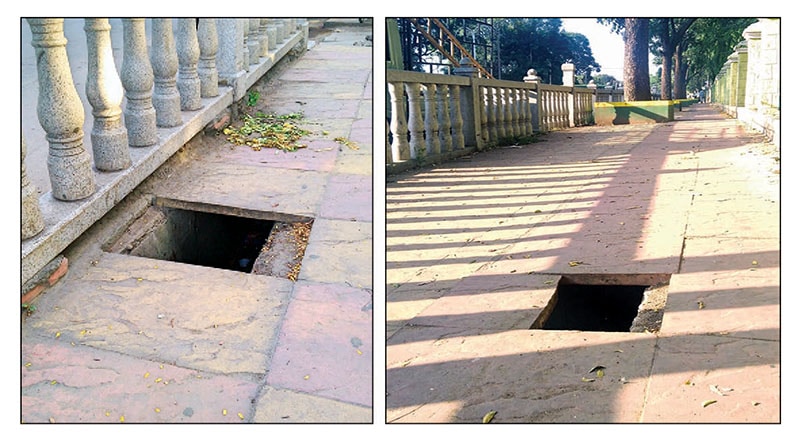 WATCH OUT WHILE YOU WALK: Caved-in footpath tiles on the busy Sayyaji Rao Road posing danger for pedestrians.

The incident in 2015 was a warning bell to the MCC to pull up the contractor and get the footpath work completed at the earliest. Sadly, nothing was done and the Core Heritage Zone is still an eyesore, screaming for immediate attention.

When Star of Mysore spoke to DC Abhiram G. Sankar, who is also the Dasara Special Officer,  on the pathetic state of footpaths and the unpreparedness of the MCC, he said that works were on full swing to repair broken concrete slabs and fill potholes. “This year, the focus will be on celebrating a traditional and tourist-friendly Dasara and the entire District authority including the MCC are making sure that tourists are not inconvenienced,” he said.