Home » News » In synchronisation with bhava 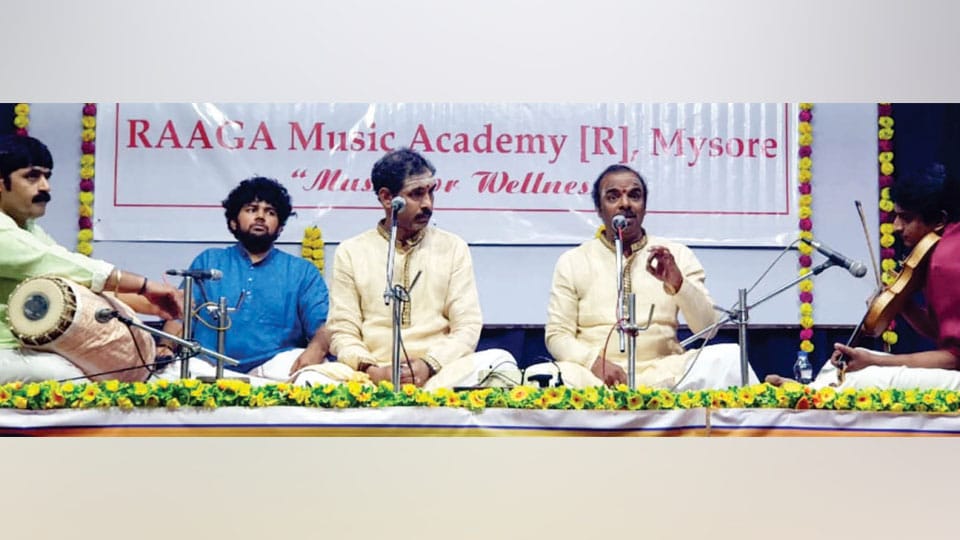 In synchronisation with bhava

Under the aegis of Raaga Music Academy, Mysuru, Malladi Brothers, Sriramprasad and Ravikumar, presented a concert on the 18th of January at Mysore Vasudevacharya Bhavana with Nishanth Chandran on violin, Tumkur Ravishankar on mridanga and Sunad Anoor on kanjira.

Synchronised voices, good planning and energetic presentation marked the concert. Ravi did most of the singing as Sriramprasad was down with a throat infection.

Beginning the concert with a rare varna in Asaveri, the brothers chose to sing Mysore Vasudevacharya’s ‘Girija Ramana’ in Gambheera Nata and ‘Naa Morala’ by Sri Tyagaraja in Devagandhari, which were a rich delineation.

‘Shruta Jana’ on Lord Dhanvantari was relevant as the concert was organised by an Ayurvedic Centre.

‘Sarasija Nabha Sodari’ in Nagagandhari by Muthuswami Dikshitar was commandingly elaborated, which was followed by the main attraction of the evening Shankarabharana.

Ravikumar packed bright brigas and succinct phrases into the alapana. Nishanth Chander’s version was equally enjoyable. Tyagaraja’s majestic composition ‘Swara Raga Sudha’ set to Vilamba Adi was presented with all majesty, bringing soulful swaras for the pallavi. Including all the charanas in this composition was appreciative.

Ravishankar’s mridanga was soothing and his taniyavartanam with Sunad Anoor on kanjira was grand and drew appreciation from the audience.

In the post-tani part, a Purandara Dasa Devaranama in Behag, an Annamacharya composition in Revati – ‘Aakati Velala’ and a Devi Bhajan ‘Jaya Jaya Durge’ in Durga were included.

The brothers concluded the concert with the Kamas tillana.