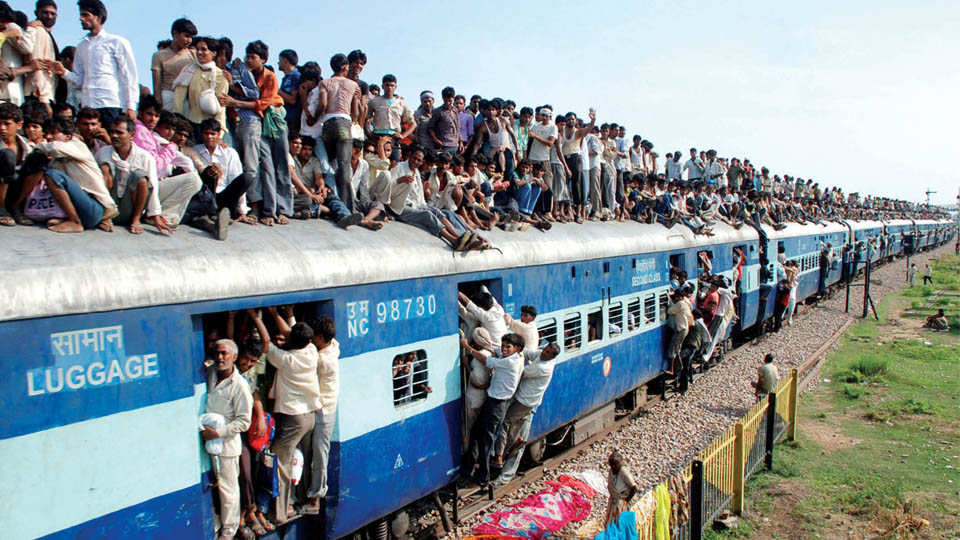 Last Friday, 62 people died and 90 were injured in Punjab when Train No. 74943 from Jalandhar to Amritsar ploughed through a crowd that had gathered for a Ram Leela event. And where had the people gathered to watch Ravan’s effigy burn? On the Railway tracks!

Now, who is to be blamed for this tragedy? First, people blamed the Loco Pilot, then the Organiser, then the Railway Department, then the Police, then the political parties blamed each other… But why does no one think it is the people’s fault? Why did they gather on a Railway track in the first place?

Yes, the Station Master could have informed that people were on the tracks so all trains could be stopped. Yes, the Police could have chased people out of the tracks. Yes, there could be many things that could have been done but…

Just earlier, a train had passed on one of the triple tracks and these people were still not scared enough to get off the tracks. How amazing was this burning of Ravan’s effigy that one would risk their life to watch it? Also didn’t the people think by congregating on the track and stopping trains, they were inconveniencing their fellow citizens who were going home for holidays?

Aren’t we responsible for our own safety? Every year the Police warn people not to climb up and gather atop old buildings along the Dasara procession route. No one listens. May be, once a tragedy strikes then people will pay heed to Police warning.  How much can the Police or law do if people don’t care for their own safety?

In India, we have a culture of false bravado born from the belief that bad things happen only to others, not to us, until it does. And when it does, instead of blaming it on our own stupidity we pass it off as “destiny” or God’s will.

In fact, last year, according to Railway Police, in Mumbai alone 1,651 people lost their lives while crossing Railway tracks and another 654 died after falling from running trains! This means 6 people die every day in Mumbai trains because of their callous attitude towards safety.

Yes, we have a culture that has complete disregard for our safety and others’ too — from getting up before a flight comes to a complete halt to jumping onto to a moving train; from driving up a one-way street to riding a bullock cart down the wrong side of a highway; from not wearing safety goggles on factory floors to not wearing helmets; from disregarding building fire safety norms to not checking safety ratings of cars; from sticking a selfie-stick out of a car window to take pictures to stopping and getting out of the car in the middle of a wildlife sanctuary to taunt  a wild elephant for a Facebook moment…  We don’t give a S**T about safety, but…

When we die because of our own stupidity we want compensation! Why must a tax-payer pay for other people’s bad choices?

Now, the Punjab government is planning to pay Rs. 5 lakh as compensation and some more. We wonder how much solatium is paid to a martyred solider who risks his life to protect our nation?

We give nothing for bravery and patriotism but reward stupidity, irresponsibility and illegality. Yes, being on Rail tracks is illegal. Why must the tax-payer bear the burden of self-inflicted tragedies?

Surely, compensation will help some poor families but is it not more important for the government to make rules and laws so such tragedies do not happen again? Aren’t laws there to save people from their own stupidity? Yes, but…

Then again, the government itself puts its citizens in harm’s way by building flyovers that collapse, open manholes that devour pedestrians and our Traffic Police run into traffic to catch violators only to cause accidents.

It’s ironic that in most public works, the very exercise to do something good for the public is done in a manner that is most unsafe and bad for the public. Public safety gets worse when it comes to road works that are done during the day in thick traffic.

Also, many may remember a few years ago how irresponsible tree-cutting ripped a family from Mysuru apart. Prarthana Shenoy (33), a young mother and wife, died when her family, on their way to Ooty for a holiday, stopped their Toyota Innova where a huge banyan tree was being cut for road widening. Before they realised, the banyan tree fell on the car and Prarthana was crushed. As usual, a case was registered in Gundlupet Police Station. Then what happened? Nothing.

How will public works officials be responsible when they are never held accountable and the laws never applied? The Indian Penal Code 299 states: “Whoever causes the death of any person by doing a negligent act not amounting to culpable homicide, shall be punished with imprisonment or fine, or both.”

This IPC Section applies to the government also and Delhi High Court used it when it passed a judgement that a PWD Assistant Engineer was negligent in discharging his official duty. And what was he negligent about? He did not prevent breeding of Aedes Aegypti mosquitoes in the District Court Complex!

Well, it seems five Judges fell sick due to the mosquito problem. So, yes, when big government officials are affected then the law is implemented. But if an ordinary citizen dies, compensation is awarded. It is interesting that the government uses public money to buy public silence! Wah !!

When we are headless enough not to keep our own heads safe by wearing a helmet, all we can say is that either we have a Death Wish or a Superman Complex. Or, like everything else, we just leave it to Destiny and God. In the end, why would our government care for our lives if we ourselves don’t?