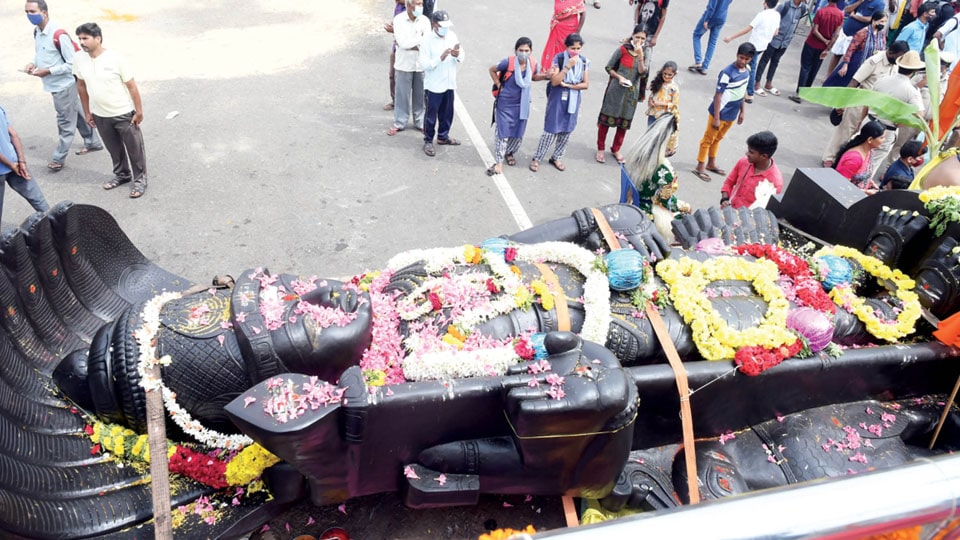 Mysore/Mysuru: Plans have materialised to install India’s tallest Lord Subramanyeshwara statue (54-ft) at Gattevadi village under Doddakavalande hobli in Nanjangud taluk. The 18-ft statue of the Snake God will be placed on a 36-ft stone pedestal and the initiative has been taken by Thapobhoomi Trust.

Yesterday, the black stone 18-ft statue arrived in Mysuru on its way to Nanjangud and the sculpture of the standing Lord with a giant multi-headed snake with an open hood offering him protection has been carved with a single stone — monolith.

The statue, mounted on a vehicle, arrived at Kote Anjaneyaswamy Temple entrance of the Mysore Palace and the titular head of erstwhile Mysore royal family Yaduveer Krishnadatta Chamaraja Wadiyar and other dignitaries showered flower petals.The statue has been sculpted at Malur village near Kolar by sculptor Ramanath with an estimated cost of Rs. 15 lakh. The Thapobhoomi Trust has claimed that this is the tallest statue of Lord Subramanyeshwara in India. Special pujas were performed after the statue landed in Mysuru.

Yaduveer Wadiyar expressed happiness that the statue came near the Palace and opined that a temple and a statue like this in any village will foster development of that particular village. From Mysuru, the statue will be transported to Nanjangud Srikanteshwara Temple for another puja and other rituals. Nanjangud MLA B. Harshavardhan, Chamaraja MLA L. Nagendra, Mayor Sunanda Palanetra, Corporator M.V. Ramprasad, MUDA Chairman H.V. Rajeev, University of Mysore Vice-Chancellor Prof. G. Hemantha Kumar, City BJP President T.S. Srivatsa, Temple Dharmadarshi Subramanya Swamiji and others were present.