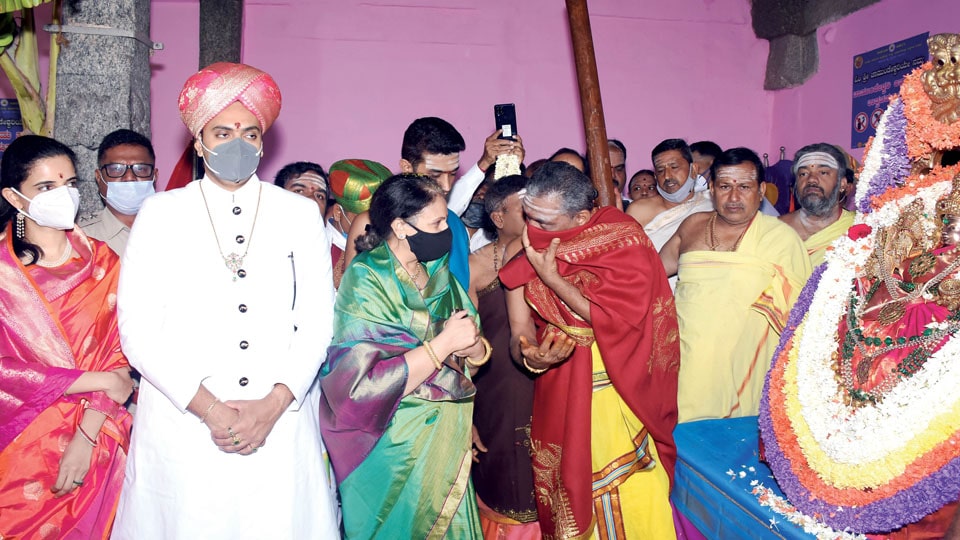 Mysore/Mysuru: Amidst clear morning skies and ban on devotees due to COVID pandemic, the famous Chamundeshwari Rathotsava was held atop Chamundi Hill this morning in a simple yet traditional manner.

Due to COVID-19 crisis, the Deputy Commissioner had banned entry of devotees to the Hill Temple both by road and footsteps during the Rathotsava as a safety and precautionary measure.

The Rathotsava, also known as ‘Divya Ratharohana,’ took place between 7.18 am and 7.40 am in the auspicious Uttaraabhadra Nakshatra, with the specially decorated Chikka Ratha (Small Chariot) carrying the idol of the presiding deity (Utsava Murti) going around the temple amidst chanting of slogans hailing Goddess Chamundeshwari by Hill residents.

Erstwhile Mysore Royal family members — Pramoda Devi Wadiyar, Yaduveer Krishnadatta Chamaraja Wadiyar and Trishikha Kumari Wadiyar — set off the Rathotsava by dragging the Chariot to some distance. As the Chariot went in a procession around the temple, the Armed Police fired gunshots in the air in keeping with the customary practice. The procession was accompanied by Mangalavadya (Music Band) and Police Band.

Earlier in the day, the associated  puja and rituals began as early as 4 am with the performance of Mahanyasapoorvaka Rudrabhisheka, Archane etc., under the guidance of the Temple Chief Priest Dr. N. Shashishekar Dixit.

As a security measure, the Police had formed a tight ring around the Chariot as the Utsava Murti was adorned with jewellery, to ensure that no one goes close to the idol.

This year, Chikka Ratha was used for the Rathotsava instead of the usual Dodda Ratha (Big Chariot), due to the pandemic.

The Hill Temple was re-opened to the devotees after 10 am following the completion of all rituals.

On Oct. 21, Teertha Snana of the deity will be held atop the Hill, thus formally signalling the end of Dasara festivities this year.