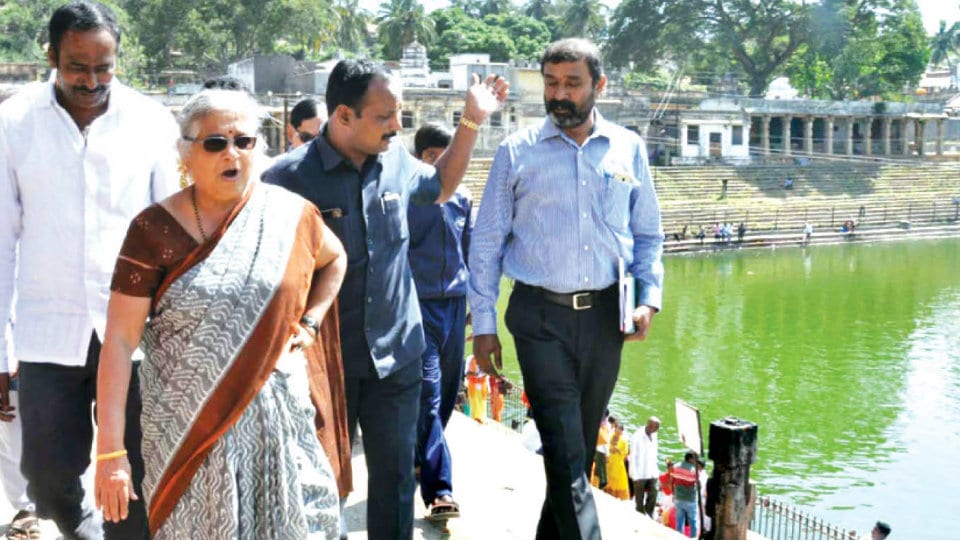 Melukote:  Infosys Foundation will contribute for the restoration of historical monuments at Melukote of Pandavapura taluk in Mandya district. Foundation Chairperson Sudha Murty said that the Foundation, in association with the State Government, would initiate measures to give a facelift to the monuments in Melukote, without affecting their original form.

Melukote, one among the many historical pilgrimage centres in Karnataka, has over 100 archaeologically significant monuments such as ponds, ‘kalyanis’ (step ponds), temples, mantaps, and other structures. Many are on the verge of collapse or have been overrun by weeds.

Sudha Murty yesterday visited Melukote and visited various spots that have religious and tourism significance. She visited the Kalyani complex, Bhuvaneshwari Mantap, Ekashila Ganapa, the canal that brings water to the Kalyani and Akka-Thangi Kola and expressed her unhappiness over poor maintenance.

She later held a meeting regarding the development of this pilgrimage centre. The meeting was attended by Mandya District Minister C.S. Puttaraju, Tourism Minister S.R. Mahesh, Mandya Deputy Commissioner N. Manjushree and officials from various departments.

Speaking to reporters after the meeting, Sudha Murty said, “Melukote has a history of thousands of years and it is our responsibility to protect and maintain the monuments constructed by the Hoysala Kings, Vijayanagar and the Wadiyars of Mysore. Apart from the temple pond, there are 107 ponds and 78 Mantaps in the temple town and these ponds will be developed without affecting their heritage value,” she said.

“During the inauguration of Dasara 2018, I have discussed this with Chief Minister H.D. Kumaraswamy on the development of Melukote by the Infosys Foundation and the CM has assured all kind of support. Discussions will be held with historians, archaeologists and scientists before making an agreement with the government. Existing buildings will be given a new look,” she added.

Minister Puttaraju welcomed the initiative of Infosys Foundation and said that a project report has been submitted to the government to restore and rejuvenate Kalyanis at Melukote at an estimated cost of Rs. 32 crore.

Interestingly, in July 2015, an integrated development plan to develop Melukote at a cost of Rs. 500 crore was prepared and submitted to the State government. That project is, however, still in a limbo.

Tourism Minister S.R. Mahesh said that the process was on to constitute Melukote Development Authority. A proposal for Rs. 32 crore has already been submitted to the government for the development work that includes rejuvenation of over 108 Kalyanis. The support extended by the Infosys Foundation will help in overall development, he said.

We were pained by disaster in Kodagu: Sudha Murty

On the relief package of Rs. 25 crore announced by Infosys Foundation for the flood victims of Kodagu, Sudha Murty said that she was pained to see the sufferings of flood-hit people. “The State Government had not asked the Foundation for contribution and it was a voluntary gesture from our side. We have already reserved the money and we will build houses for the victims,” she said.

“The Foundation will sanction Rs. 25 crore to rehabilitate the flood-affected in Kodagu. It is not possible for us to identify the victims. The construction of houses will begin the very next day when the government identifies the victims and the land,” she added.