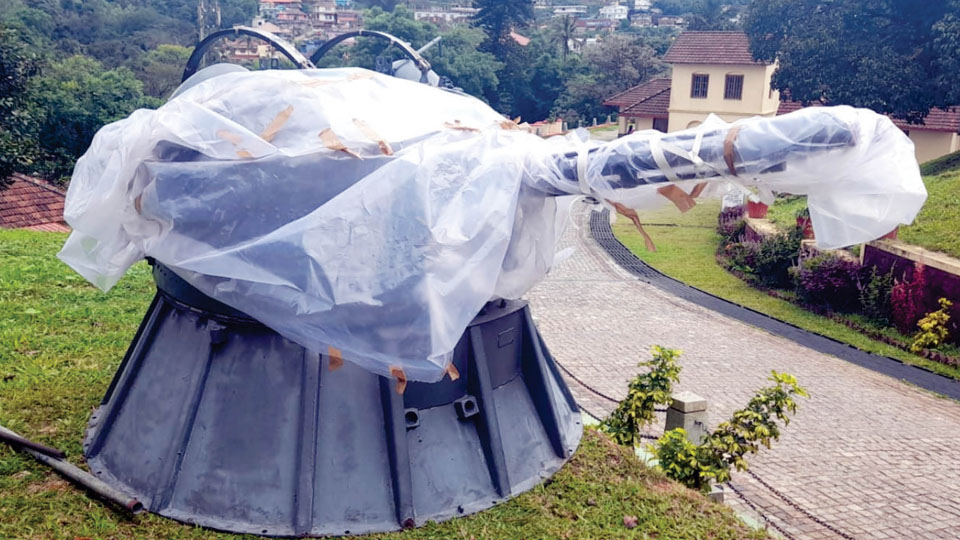 Madikeri: In a landmark move that will draw tourists and visitors in droves to Sunny Side, General Kodandera S. Thimayya’s house in Madikeri that has been converted into a Museum and a War Memorial, a huge model of INS Shivalik, an anti-aircraft gun and a decommissioned submarine have been added as new additions apart from other memorabilia that includes ‘Himmat’ T-50 battle tank and MiG-20 plane.

The submarine, INS Shivalik model and the anti-aircraft gun were brought to Madikeri from Visakhapatnam Naval Base in giant many-wheeled trucks and have been placed on the museum campus for a formal handing over and opening.

The formal handing over will take place in Madikeri either in December this year or January 2022. The Flag Officer Commanding-in-Chief, Western Naval Command of the Indian Navy, will arrive in Madikeri and officially hand over the new items to the Deputy Commissioner and they would be open for public display.

Till now, only one ship anchor was on display in the museum and not many of the Indian Navy relics were there. But now with the addition of the INS Shivalik and a submarine being added to the existing attractions, it is a befitting tribute to the celebrated General who is Kodagu’s pride.

INS Shivalik is designed to escape detection by normal radars and surveillance equipment. Special aerodynamics, equipment and material used in designing and building these ships makes it very difficult to monitor their movements. That’s why they are called ‘stealth frigates.’

With INS Shivalik, India made it to the elite club of eight nations that build stealth warships, adding new fire power and muscle to its Navy. Apart from India, only the US, Russia, UK, France, Sweden, Japan, Italy and China have the capability to build stealth warships of this size and class.

The vessel was ordered in 1999 and saw its keel laid down on July 11, 2001 by shipbuilder Mazagon Dock Limited. As a multi-role warship, the INS Shivalik is fielded with a varying group of armament options to contend with aerial, surface and underwater threats.

Rear Admiral Ichettira Uthappa, who is a relative of Col. (Retd.) Kandrathanda Subbaiah, the President of Field Marshal Cariappa and General Thimayya Forum, had visited Sunny Side four months back and Subbaiah had drawn the attention of the Rear Admiral to the fact that the museum did not have a warship.

Uthappa promised Subbaiah that he will pursue efforts to bring a warship model to the museum and accordingly, the war machines were brought to Madikeri. Rear Admiral Uthappa interacted with Navy authorities and sanctioned INS Shivalik warship model that is 24-ft in length and a submarine which is 8-ft in length.

Even the anti-aircraft gun that was brought to Madikeri from Visakhapatnam had served the Navy for years and the cost of all the latest additions to the museum is estimated to be Rs. 20 lakh.

According to Field Marshal Cariappa and General Thimayya Forum Convener Major (Retd.) Biddanda Nanjappa, Rear Admiral Uthappa bore the transportation costs of shifting the naval items to Madikeri and in the coming days, a suitable place will be made to accommodate these war machines, he added.