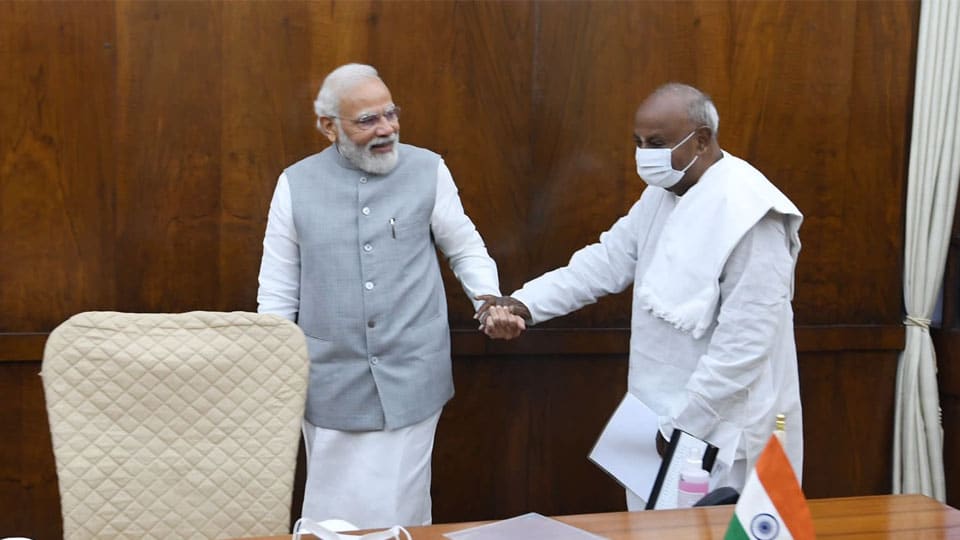 Truck between BJP, JD(S) in Council polls and IIT for Hassan on agenda

New Delhi: As the date for the Karnataka Council polls nears, Janata Dal-Secular has reached out to BJP to forge an alliance. As evident, party supremo H.D. Deve Gowda met Prime Minister Narendra Modi and held discussions on the same yesterday.

Photos of Modi holding Deve Gowda’s hand and offering him a seat went viral for the bonhomie on display. “Had a great meeting with our former PM Shri @H.D. Deve Gowda Ji in Parliament today,” Modi tweeted.

It is said that after a discussion, Modi told Deve Gowda that the BJP’s stand to offer support will be discussed and will be communicated at the earliest. JD(S) has fielded only five candidates for 20 seats for biennial elections and will extend support to BJP in 15 places in exchange of favours from BJP in the places where JD(S) has fielded candidates.

A few days ago former Karnataka CM B.S. Yediyurappa openly sought support from the JD(S) and appealed to the regional party to offer support to BJP wherever it is not fielding candidates. Kumaraswamy had praised Yediyurappa calling him a good man.

Speaking to reporters later, Deve Gowda said he discussed the upcoming MLC elections with Modi. “I told Modi that State-level leaders from JD(S) and BJP have to take a decision on forging an alliance,” he said.

“Yediyurappa also said he would discuss with leaders on the issue soon. Finally, it’s up to the BJP to take a call on alliance since the party is in power. I have conveyed this to the PM,” Deve Gowda said.

Responding to a question, Deve Gowda said they had no funds to field candidates in all seats. Kumaraswamy will decide on supporting BJP candidates in some seats, he said and added that there was no discussion on continuing the alliance during the next elections.

The former PM reiterated his demand for setting up an Indian Institute of Technology (IIT) in Hassan, his home district, during his meeting with PM Modi. Deve Gowda told reporters that he had sought time from the PM to discuss establishing an IIT in Hassan as Union Minister Dharmendra Pradhan had earlier said it is not possible to consider his request.

Even in 2015, when there was a row over Dharwad getting an IIT, Deve Gowda had asked Modi to consider Hassan.