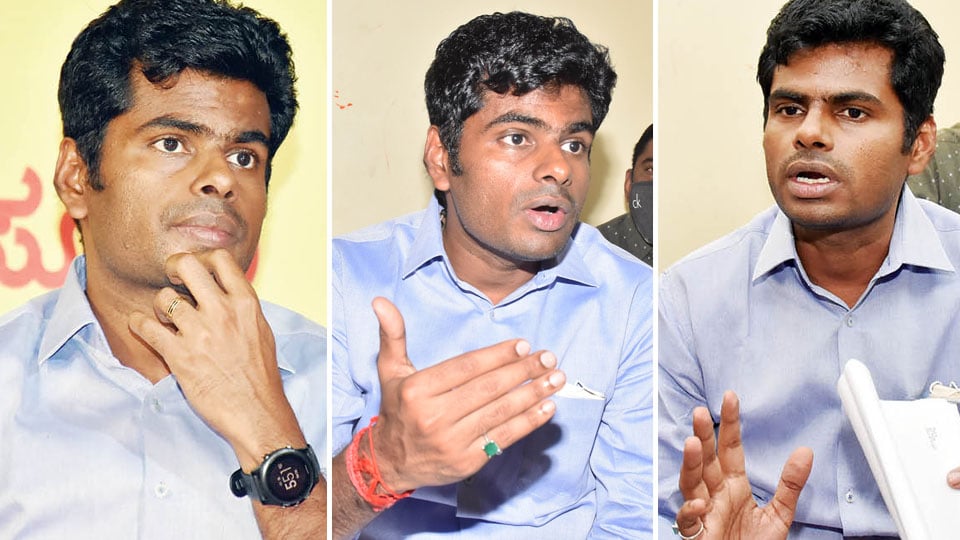 Interview with K. Annamalai, cop-turned-politician: BJP will come to power in Tamil Nadu in 2026

People of Karnataka were happy and sad when an IPS Officer quit Police force and joined politics. They were happy that they can expect cleansing of political field. But they were sad that an upright officer is being swayed away due to strong current of politics. He is none other than Kuppusamy Annamalai, a former Karnataka cadre IPS Officer who had earned the nickname ‘Singham’ for taking on political bigwigs while working as SP in Udupi and Chikmagalur. He is now Tamil Nadu State BJP Unit Vice-President. During his recent visit to Mysuru, Star of Mysore caught up with the cop-turned-politician to know his plans in a relatively new field. Excerpts. —Ed

Star of Mysore (SOM): How has been your journey from Police force to political force?

K.Annamalai: In politics, it is working in grassroots level by virtue of power. Otherwise both are beautiful jobs. I had the privilege of finding out solutions to problems and interacting with people. But,  for a person like me it is starting from zero and then growing in my way up.

Mine has been an interesting journey. I do not see any difference between politicians and bureaucrats. The bureaucrats normally look at the things white and black. Whereas, politicians work in grey areas because they are aware where the problem exists. But it was a biggest challenge for me to make changes in Police force where I had power.

SOM: The Assembly polls are due to be held in Tamil Nadu in 2021. How is your party prepared?

Annamalai: We have prepared very strongly well in the last one to two years. Yatras are being conducted to show our party presence in the State. We have strengthened our booth committees in villages and talking to our big leaders. A big ground level momentum is slowly building. When we see everything holistically and combinedly, this time, the BJP should make it up in Tamil Nadu without any problem.

Coming to me, sometimes we have to be practical also. Our primary focus is getting more number of seats and coming to power. The BJP will come to power in Tamil Nadu in 2026.

SOM: How are you so confident about it?

Annamalai: Every ideology has got a cycle of its own. The Dravidian ideology is almost a dying ideology in Tamil Nadu. And more than ideology it is cult figures like Annadurai, M. Karunanidhi and Dr. J. Jayalalithaa who had their own ideology and principles that attracted the masses. Now, we don’t have them. In current situation, Prime Minister Narendra Modi is a very tall leader and all-time highly respected national leader. The combined effort will help the BJP to come to power.

SOM:  Can BJP make a dent in TN politics, this time?

Annamalai: Of course. Why can’t we? I don’t see any reason why it can’t be achieved. However, we need to understand that it cannot happen overnight though several factors are contributing for it. Some factors are created for you and some are created for party per se. Our party is really growing strong under the leadership of Modi. Combining everything… yes, BJP is all set to lay its foundation very strong in the coming Assembly and 2024 Lok Sabha polls. And it will go and take power on its own.

SOM: People of Tamil Nadu are known for self-pride or asmita and have always stood for nationalism. They have considered BJP as party of traders. Will your party be accepted?

Annamalai: I am afraid you are mistaken. BJP is never seen like that in Tamil Nadu.  BJP is a pan-India party and a nationalist party. You will be surprised that a Tamilian, Jana Krishnamurthy had occupied the post of BJP National President.  It is not that Tamilians do not occupy high posts, or they weren’t there.  Modi is very fond of Tamils and you might have seen in TV when our PM spoke a few sentences in Tamil on an international platform like United Nations. The allegation that ‘BJP is a party of traders’ will not hold water anymore.

SOM: The 2021 election is being held without two iconic figures, M. Karunanidhi and Dr. Jayalalithaa, who both had swayed the electors. How do you read the situation?

Annamalai: Yes, definitely the voters of Tamil Nadu are going to miss these two leaders. Though I may belong to a different political outfit but still have a lot of respect for those two leaders. Both have contributed to the State in their own way. But the problem is that the DMK party of late Karunanidhi, which was founded in 1957, no longer remains clean due to corruption. DMK is a populist party in nature by distributing freebies to the electorates. So BJP in alliance is going to be more on aspirations part, what Modi has done and what coalition partner (AIADMK) is going to do for the State in the coming months.

SOM: TN history shows that no alliance partner of two major regional parties, DMK and AIADMK, has come to power. Will the BJP prove wrong in the coming Assembly election?

Annamalai: Right or wrong, people give majority to one party. When you are in coalition, one party gets majority and it will come to power. Last time, when DMK came to power in 2006, they were in minority.  They hadn’t got even 50 percent of votes. And history can always be re-written. Just wait and see what people wanted to say and voice out, after election results are out. Then it will be the best time to answer your question.

SOM: BJP’s vote share in previous elections has not been promising. Will your party prove wrong this time?

Annamalai: In TN Municipal elections, you’ve seen the BJP’s superb cyclical change. From a non-existent, our party won 46 seats. And in West Bengal, we are seeing a lot of momentum shift. I believe in momentum shifts and it will happen now. And this time, we will be in double digits.

SOM: BJP only talks of Hindutva. Is this accepted in Tamil Nadu which was the focal point of Dravidian movement?

Annamalai: Which party never talked of Hindutva?  And which party is not going to talk about Hindutva? Only thing is that BJP talks of spirituality. The reason why BJP is strengthening its base in Tamil Nadu is that no party is talking about Hindutva as all are busy in appeasement politics.  Congress and DMK have always played minority appeasement card just to keep their vote-bank intact. But they will criticise us if we talk about a Hindu or Hindutva. Those who talked about Hindutva  are deliberately targeted. That is why the BJP want to be their voice. Our party is never against Muslim community or other community. Why we should not talk about Hindutva? But the media conveniently labels BJP as a majoritarian party or RSS as a propagator of Hindutva.

SOM: What strategy BJP will adopt to make inroads into TN politics?

Annamalai: We will have different strategies and one among them has been winning election. We have four advantages — good organisation, strong candidates, good election management and an able national leader like Narendra Modi. Seeing all these factors, why should not the electorate give us a chance to rule?

SOM: Will you contest Assembly election. If so, from which Constituency?

Annamalai: Clearly it is our leadership decision. If they want me to contest I will. I do not know whether they wanted me to contest in the coming Assembly election. If at all I am contesting, it will be from Coimbatore or Karur.

SOM: Another Tamil actor, Kamal Haasan has formed a new political party and has been campaigning to contest in the coming Assembly election. He is also planning to align with All India Majlis-e-Ittehadul Muslimeen (AIMIM)? Which votes he will take away?

Annamalai: Well I don’t know. AIMIM has never contested election in TN. All said and done anybody can enter our State and contest. I am not sure how Haasan’s party will fare in the State.

SOM: Your Delhi leaders say no to alliance with AIADMK. In that case will BJP contest alone?

Annamalai: Nobody has said that. Union Minister Prakash Javadekar has said it is not up to him to talk about it as it was a matter privy to BJP high command and Central Parliamentary Board. So he has refused to comment but media has misunderstood it.

SOM: Will AIADMK split again after Sasikala Natarajan, a close aide of Jayalalithaa, comes out of jail?

Annamalai: I really can’t comment. We have to wait till she comes out. Let us wait and see what will happen in AIADMK. Now it is difficult for me to comment.

SOM: Will she be a game-changer?

Annamalai:  I don’t think she will be a game-changer. But we have to wait and see what impact she will make in Tamil Nadu.

SOM: Are you enjoying or regretting for having quit Police Department to join politics?

Annamalai: I am enjoying. Because it is indeed a great feeling. Challenges are so huge especially in a State like Tamil Nadu. We have to work in grassroots level to strengthen the party. But I am enjoying. I am part of a larger cast. I am happily affiliated with it. I am a small person in the large party.

SOM: With what intentions you came into politics?

Annamalai: With same intention which I had told earlier. I wanted to work in the grassroots level. Politics is like a large field where you can participate in policy-making and will have larger perspective to change law, frame policies and ensure social justice. For that reason I decided to join politics.

SOM: What were you doing after quitting Police force and before joining politics?

Annamalai: In Tamil Nadu, we have formed a foundation called ‘We the Leader’ in which over 6,500 youths are working in ten districts of the State. They are imparting training in organic farming and other social activities. Last year, I decided to join politics because it is a larger platform if you align with a good political party.  There are two choices — if you don’t like politics you can work as an ordinary person without any power. But, if you work in politics, you can bring in changes. Many people have sacrificed personal and professional life for the sake of society. To make change, one needs to be with a good mindset. I am not after any role or power but only interested to bring changes in TN with a large perspective.

SOM: Till recently, Tamil Superstar Rajinikanth wanted to plunge into politics but suddenly took a U-turn. Is BJP surprised or disappointed?

Annamalai: It’s his personal decision not to get into electoral politics. He knows what is right for him and I respect him for that.