Home » Feature Articles » Yoga For All 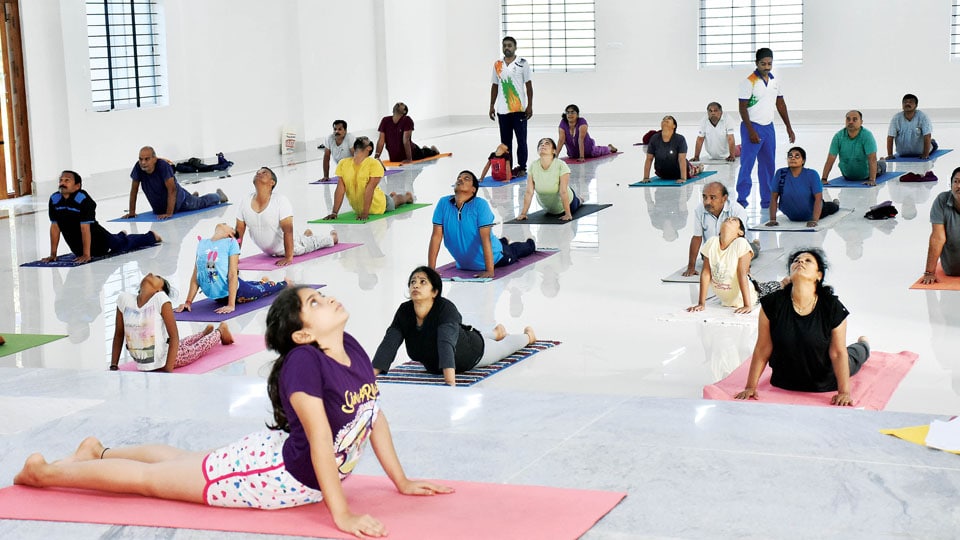 The importance of yoga came to light when the scientists spoke of immunity power to defeat COVID-19. They opined that breathing exercise was very much required for people to save self from the pandemic which has wreaked havoc across the world.

For some nations, yoga may look new. But for Indians, yoga has been a part and parcel of their life from time immemorial. Rishis were said to be practicing yoga to keep them fit and fine. Naturally, this has come as a gift for every countryman. In recent years, Mysuru has emerged as a ‘yoga hub’, with thousands of foreigners coming here to do certificate courses in yoga every year. Unfortunately, yoga has been commercialised and common citizens are unable to learn because of huge fee. At this juncture, the century-old University of Mysore (UoM) has opened ‘Yoga Mandira’ (Yoga Hall) at the Sports Pavilion under the Department of Physical Education to teach yoga for one and all at a nominal fee. This will be a boon for health-conscious people, says Dr. P. Krishnaiah, Director, UoM PE Department, speaking to Star of Mysore. Excerpts. —Ed

Star of Mysore: What made UoM to start Yoga Mandira?

Dr. Krishnaiah: The idea of having a Yoga Hall was conceptualised 3 to 4 years ago as a number of our students were winning gold and silver medals in All India Yoga competitions regularly. The students won gold medals for three consecutive years in All India Inter-University Yoga competition. But there was no place for them to practice. So, we requested the Varsity authorities who asked us to come out with a proposal. Subsequently, a proposal for Rs.1.30 crore was prepared and submitted. It was okayed and funds were released. The works started in 2018 and it was opened virtually by Governor and Chancellor of Universities, Vajubhai R. Vala on the day of Centenary Convocation of UoM recently. The incumbent Vice-Chancellor Prof. G. Hemantha Kumar and Registrar Prof. R. Shivappa have been actively supporting all the yoga activities. Without their support this project would not have been completed.

Star of Mysore: What is the main motto of Yoga Mandira?

Dr. Krishnaiah: Mysuru has been the cradle of yoga, thanks to patronage by one and all. Yoga exponents from Mysuru like Pattabhi Jois, T. Krishnamachar and B.K.S. Iyengar took this old art beyond India and created health awareness among foreigners too. After the outbreak of COVID-19, people have become health-conscious and they have taken up yoga seriously to stay safe from the pandemic. Of late, foreigners have started believing that the immunity power will increase through practicing yoga daily. Pranayama is said to be the best medicine to stay healthy during the current pandemic.

Star of Mysore: What about faculty? Are they qualified to train people of          all ages?

Dr. Krishnaiah: We have three yoga coaches — M.R. Kishore, B. Ravi and M.S. Shilpa. All three are from Mysuru and have undergone training from the Sports Authority of India (SAI), Patiala. They have also secured gold medals in All India Inter-Varsity Yoga competitions. One of the coaches, Kishore, has been first in South India to have bagged first place in National Yoga Training Course conducted by SAI, Patiala. The main motto of Yoga Mandira is to share good health among people.

Star of Mysore: Is Yoga Hall restricted only to UoM students and staff?

Dr. Krishnaiah: No. It is open to one and all. Recently, we called upon people to register their names for yoga training and as many as 90 persons have shown interest to join the course. The Hall was quite big enough to accommodate a minimum of 200 people at a time by following social distancing. Basic infrastructure has been provided in the big hall plus equipment. Still there is scope for further improvement in the coming days.

Star of Mysore: Is UoM the only Varsity in the country to have a dedicated Yoga Centre?

Dr. Krishnaiah: I am not aware of this. But I am sure that no other Varsity has such a big hall dedicated exclusively for the promotion of yoga. If such a centre existed in other Universities, then it should have won the medals in All India Yoga meets. In fact, yoga is one such physical and spiritual meditation which has separate exercise for different ailments. Our coaches will explain what to do depending upon health issue of every individual.

Star of Mysore: What is the monthly fee? Is the Yoga Centre open for general public too?

Dr. Krishnaiah: So far, we have not decided on the monthly fee. But it will be very nominal and within the reach of every citizen. Since service is the motto of our University, the fee will not be exorbitant. The Yoga Hall is open not only for students, teaching and non-teaching staff of UoM but also for the citizens. The Varsity has not thought of imparting training to foreigners. But, plans are afoot to offer certificate courses in yoga for youths to learn and start yoga institutes on their own.

Star of Mysore: What is the timing of yoga training at the Centre?

Dr. Krishnaiah: To begin with, the Yoga Centre will function from 6.30 am to 8.30 am and again from 4 pm to 7 pm. More batches will be started if more number of persons enrol their names. The Yoga Hall is likely to be inaugurated formally on Dec. 4. Money is not important for the Varsity but what is important is service to people through imparting training in yoga. It is a gift to the people of Mysuru from the UoM during the pandemic.