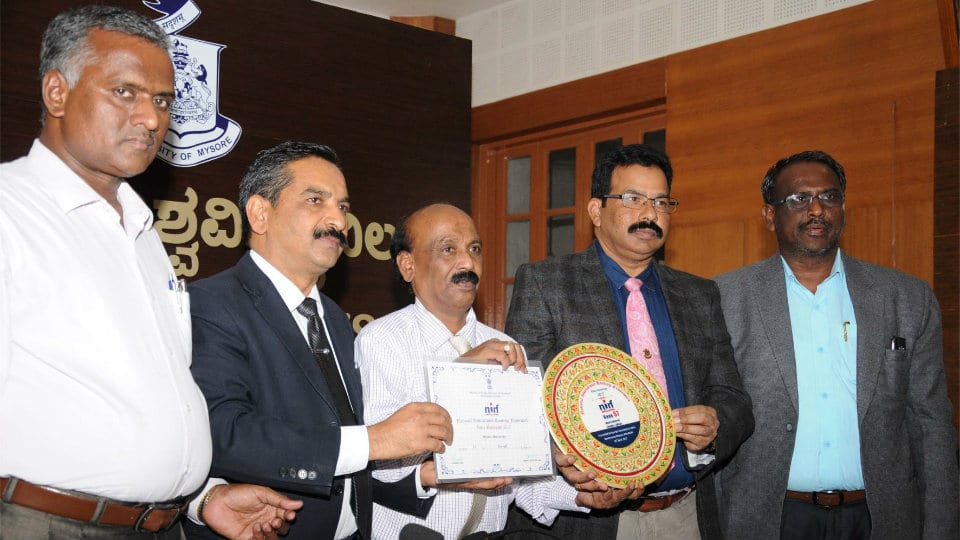 Speaking to reporters here yesterday, Acting Vice-Chancellor Prof. Dayananda Mane, who attended a function to receive the NIRF Award at Rastrapathi Bhavan in New Delhi recently, said that the University has submitted a proposal to the government seeking a hike in the pay scale of guest lecturers. Shortage of teaching staff is cited as one of the reasons for the University not getting overall higher rank.

“As per the University Grants Commission (UGC), there is a provision to pay up to Rs. 25,000 per month to a guest faculty and the UoM authorities have written a letter to the  government urging it to hike the salary of the faculty members from the academic year 2017-18,” he said.

Prof. Mane said the NIRF awarded the Varsity for its excellence and has ranked it 36 among 774 Universities across the country in the national survey conducted by NIRF. The NIRF Award function was presided over by President of India Pranab Mukherjee.

Prof. Dayananda Mane and Prof.  Lingaraja Gandhi, Director, Planning, Monitoring and Evaluation Board (PMEB), received the award consisting of a plaque and a certificate from the President. “Our achievement is worth appreciating since we are the only conventional public University in the State to have secured the NIRF rank,” Prof. Mane said.

Prof. Lingaraja Gandhi, Registrar Prof. R. Rajanna and Registrar (Evaluation) Prof. Somashekar said the NIRF ranking will enhance the profile of the University and attracts funds for research. “This will go a long way in boosting placements for our students and attracting foreign students,” they added.

The VC said the Science departments played a crucial role in boosting the rank of the University because of their research activities.

The University has submitted a proposal for Rs. 350 crore to Karnataka State Higher Education Council (KSHEC) and Karnataka Knowledge Commission (KKC) to establish centres of excellence in the Varsity.