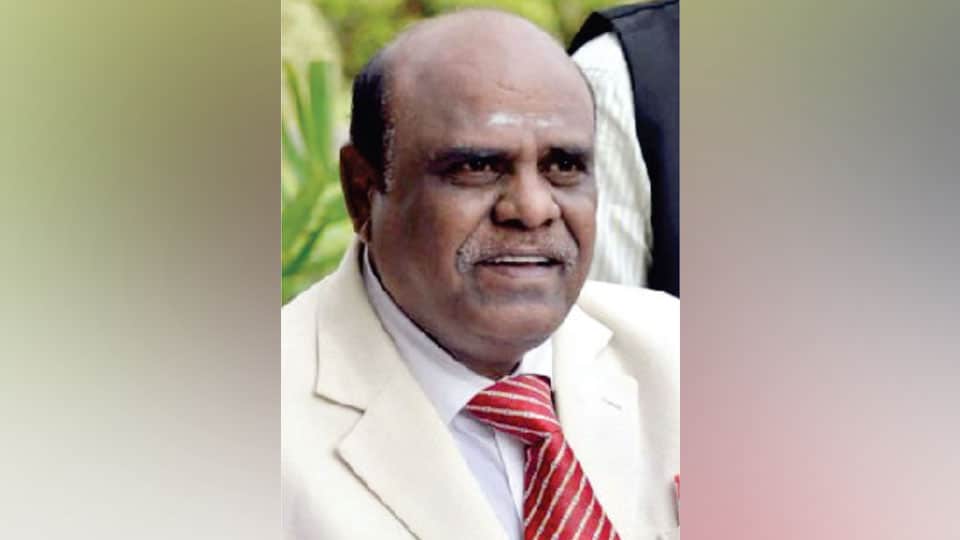 Kolkata  – The defiant Calcutta High Court Judge C.S. Karnan yesterday asked the Chief Justice of India and six Judges of the Supreme Court, who have issued contempt notice to him, to appear before him at his “residential court” on Apr. 28. Justice Karnan claimed that the seven Judges of the Bench have insulted him “wantonly and deliberately and with malafide intention”.

He said the Judges have been asked to defend themselves against the charge of violating the SC/ST Prevention of Atrocities Act, levelled by him. Justice Karnan has been insisting that he is being discriminated against because he is a Dalit.

Addressing journalists at his residence, Justice Karnan said, “On 28.4.2017 at 11.30 am, the Hon’ble seven Judges as mentioned above will appear before me at my Rosedale Residential Court and give their views regarding quantum of punishment for the violation of the Scheduled Castes and Scheduled Tribes Atrocities Act.”

He passed the “suo moto judicial order” from his residence which, he said, has now become his “make-shift court.” In the signed order, Justice Karnan said on Mar. 31, he had “pronounced a judgement wherein the Hon’ble seven Judges are accused under the Scheduled Castes and Scheduled Tribes Atrocities Act, 1989.”

In yesterday’s order, Justice Karnan said that CJI Justice J.S. Khehar had on Mar. 31 raised a question as to how his mental health was. The question was “endorsed” by six other Judges of the Bench, Justice Karnan, said, adding it amounted to insulting him in open court.

Justice Karnan had on Mar. 31 appeared in the Supreme Court in the contempt case against him, a first in the Indian judicial history, and sought restoration of his powers as a condition for his re-appearance, but the plea was rejected.