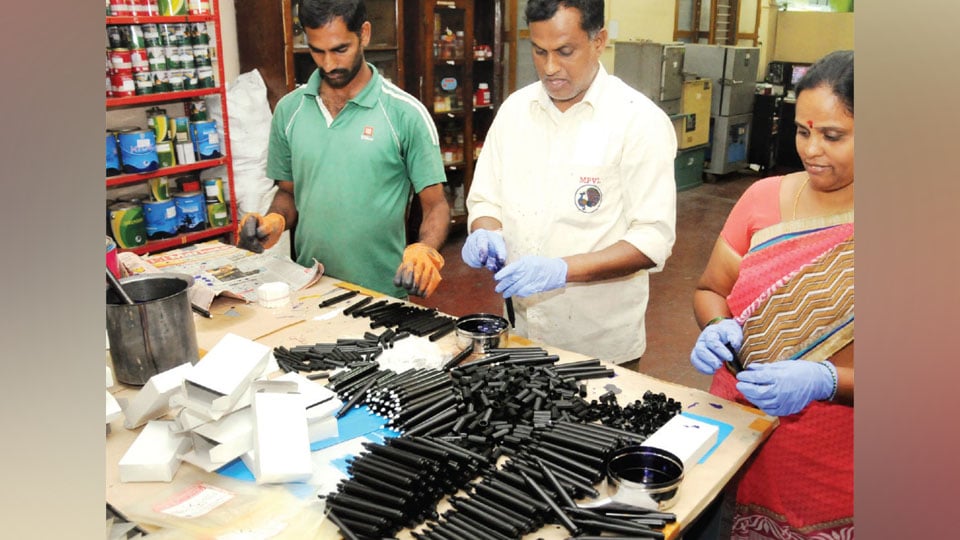 Mysuru – The Nanjangud and Gundlupet by-elections — the results of which were announced yesterday — are the last elections in the country to use vials of indelible ink. Henceforth, trendy marker pens manufactured by Mysore Paints and Varnish Limited (MPVL), also called MyLAC, will be used to mark on the fingers, across nails, of the voters as a mark of voting.

Indelible ink is used to mark voters during polling to avoid fraudulent, multiple voting and malpractices. Once it is applied on finger, it remains for a  few months.

As per the advice of the Election Commission of India (ECI), MPVL, a government of Karnataka undertaking, which has been supplying indelible ink for elections since 1962, has now come up with economical and efficient marker pens. The Election Commission (EC) has already tested the marker pens that will replace the indelible ink that has been an integral part of elections.

Speaking to Star of Mysore, MyLAC Chairman H.A. Venkatesh said that though MPVL will lose its traditional identity and supremacy over indelible ink, he was happy that the Election Commission was positive about the marker pens.

“Marker pens are convenient, user-friendly and economical. When we used to transport the indelible ink vials in containers, there were complaints of wastage, leakages and spill-over. With the marker pens now, there are no such fears and it is convenient to carry and to apply. It also saves time of the polling booth officials,” he said.

The technology for marker pen, the colour combination and the texture of the ink have been developed in collaboration with National Physical Laboratory. The EC had told MPVL that the ink supplied spilled over after application.

“The EC had asked us to find a solution which should be user-friendly and eco-friendly. Deliberating on the EC instructions, we found that a marker pen with a cartridge containing indelible ink will be the best solution. This reduces waste and the application becomes easier,” Venkatesh said. Also, the marking of the finger with brushes is not neat. Marker pens, on the other hand, can be used for neat markings and the pens can easily be transported and stored using small spaces, he added. 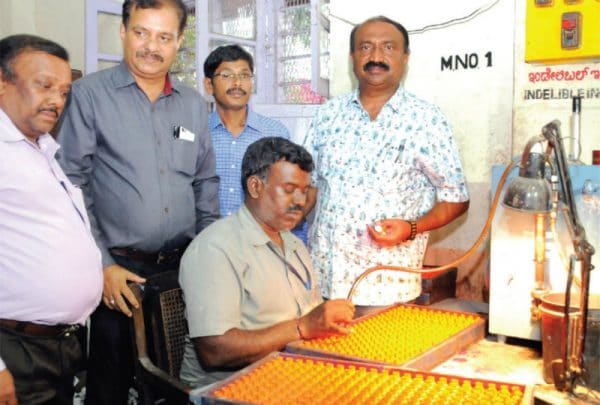 The marker pens provided by MyLAC have been used in elections in Afghanistan. According to EC sources, the marker pens are being tested and no final decision has been taken.

With the introduction of marker pens, the expenditure on the ink will come down by at least 50%. “Though it is a revenue loss for us we are happy that we are introducing new technology to the market,” he added.

MPVL was established in 1937 by Nalwadi Krishnaraja Wadiyar, the then Maharaja of Mysuru, as Mysore Lac and Paint Works Limited. It has been a dynamic entity and with changes in its products and technology, its name has also changed over the years. It got its present name in 1989.

In 1962, the EC, in collaboration with Law Ministry, National Physical Laboratory and National Research Development Corporation, made an agreement with MPVL for supply of indelible ink for Lok Sabha and Assembly elections. Since then, it has been supplying the ink for elections in India.

Apart from indelible ink, MPVL manufactures sealing wax, special Railway sealing wax, road marking paint and a wide range of polyurethane paints, thinners, industrial paints, synthetic enamels, metal, wood and cement premiers, aluminium paints and anti-corrosive paints. “Our 132 employees also produce the required paints to KSRTC, BEML and KMF. When there was a huge requirement for indelible ink vials we met the production needs and gave the required ink to the EC ahead of the deadline. This time too, we will fulfil the requirements of marker pens,” Venkatesh says.